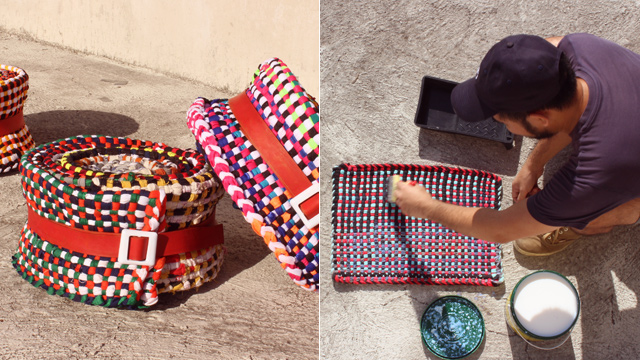 Kristoffer Ardeña is representing a Cebu-based gallery at Art Dubai.

(SPOT.ph) With the talent of Filipino artists, it doesn’t come as a surprise that they are now more often featured at international art fairs. There’s Vin Quilop who’s on his way to Canada’s Art Vancouver in April, and now there’s Kristoffer Ardeña who’s participating at the 2019 edition of Art Dubai from March 20 to 23.

Founded in 2007, Art Dubai remains one of the world’s leading art fairs, putting the focus on the works of artists from non-Western countries. It is divided into four categories: Contemporary, Modern, Bawwaba, and Residents. Ardeña, who is represented by 856G Gallery in Cebu, is participating under the Bawwaba section, which showcases works by artists from Africa, Central and South Asia, Latin America, and the Middle East. 856G Gallery, which is joining the fair for the first time, is the only gallery from the Philippines this year.

Born and raised in Dumaguete, Ardeña—who has been featured in Vanity Fair—shuttles between Spain and the Philippines while working as a full-time artist. For Art Dubai, he explores the idea of being “jologs,” a derogatory term to describe people from lower-income households, hoping to change that perception. He believes that “jologs” is culturally part of the geopolitical and poetic environment of the Philippines, and he’s translating this insight into art by using ordinary materials—tarpaulin, rugs, and Katrina fabric (typically used in school uniforms).

He’s also using the context of rugs, particularly those made from excess pieces of cloth (or retaso), as a primary source of income for lower-income families. These fabric scraps are often collected by factory workers who would sew them together into mats or rugs. You’d often see these products peddled along streets or on sidewalks. Ardeña points out that the drive to recycle and re-purpose these scraps comes from economic challenges as opposed to being environment-friendly, which is the more common motive for recycling.

He uses this idea in “Ghost Painting” (Cracked Category), which bears the images of a popular sardine brand and a rice cooker printed on tarpaulin streamers. He then paints over them with a pattern similar to that of retaso rugs and then intentionally cracks parts of the painting to reveal fragments of the images printed underneath. He’s also presenting collaborative works with award-winning furniture designer Clark Mendoza.

Aside from this approach to the social relevance of art, it should be noted that Ardeña is being represented by a gallery from Cebu. 856G Gallery, established in 2008 by artist and jewelry designer Annie Chen, is dedicated to showcasing artists and collectives living and working in the Visayas. Ardeña and 856G’s acceptance into the highly coveted Bawwaba category of Art Dubai (curated this year by Élise Antagana) should be considered a significant development in the continuing evolution of local contemporary art, and highlights the importance of listening to voices outside of Manila—and getting the world to listen to them.

Art Dubai Art Exhibit
Your Guide to Thriving in This Strange New World
Staying
In? What to watch, what to eat, and where to shop from home
OR
Heading
Out? What you need to know to stay safe when heading out