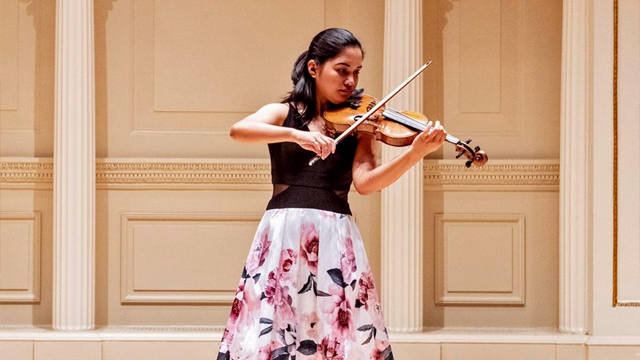 She took violin classes through Skype.

(SPOT.ph) Music lessons take a lot of time, money, and effort. And for Filipino violinist KayCee Galano, there was an added requirement of a fast Internet connection. In 2011, the young musician—who was then 10 years old—met University of Cincinnati College - Conservatory of Music professor Kurt Sassmannshaus, who was still running The Great Wall International Music Academy in Beijing, after a recital. He found out that Galano didn't have a violin teacher at the time, so he offered to give her lessons through Skype. For five years, they would go online every Tuesday: at 8 p.m. for the Filipina and 8 a.m. for the German instructor. All the hard work paid off, especially after the 18-year-old's Carnegie Hall debut in New York City on October 12.

After five years of online classes, Galano moved to Cincinnati in Ohio to enroll at the Starling Preparatory String Project, which is a scholarship program for gifted classical violinist by the Dorothy Richard Starling Foundation. She's now on her second year and has been staying with host families. "I’ve never felt more welcome. Before I moved here, I was a little bit scared, of course, but after living with the host family and meeting the Starling family, I felt at home," she told Cincinatti Enquirer in an interview.

In a Facebook post, Galano also thanked everyone "who have supported [her] and gave [her] the chance to perform all six Bach solo sonatas at Carnegie Hall." This concert venue in Manhattan has hosted the likes of Judy Garland, Nina Simon, The Beatles, Led Zepplin, and Bob Dylan.

For more information about KayCee Galano, visit her website.