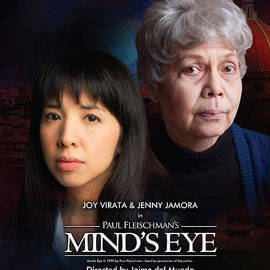 The one-off play deserves more than the two-show run it got.

(SPOT.ph) The road trip and/or unexpected vacation is a common fictional trope, usually signifying some life-changing journey for the participants. A trip to Italy figures heavily in the goings-on of a new play called Mind’s Eye, but as the title suggests, it’s a trip that takes place entirely in the imagination of the two main characters, Elva and Courtney. Both are stuck inside a convalescent home-Elva, because of the encroaching ills of old age, Courtney, because of an unfortunate accident with a horse that left her paralyzed from the waist down-but it might as well be a prison, as the set design makes clear: a row of bars all over an oppressive black background, with only a murky window for a view.

For Elva, Italy is the fulfillment of a promise to a long-dead husband (here, the play’s timeline gets fuzzy: Elva speaks of being married at 23 during the "Dust Bowl" and Depression years, but during the second scene, Courtney’s iPod-a device only invented this decade-is stolen). Courtney, though, has to be coerced into it. When we first encounter her, she’s angry, sullen, uncooperative, and withdrawn, but she grudgingly concedes when Elva pleads with her. Clearly, Italy isn’t just a vacation-it’s a way for both of them to save their sanity.

Their trip ticket to Italy is an ancient Baedeker guide book. Narrated entirely through dialogue, the trio-Elva brings Emmet, her dead husband, along for the ride as well-begins in Naples and moves on to Pompeii, Florence, Rome, and finally the Alps. At first, Courtney merely reads from the encyclopedic book, while Elva pops in to deliver long, deeply felt narration that fleshes out the trip. Then, as the play goes on, Courtney begins to take the vacation in unexpected directions-at first, alone, rising up from the bed, her paralysis gone, to see for herself the statue of the dreaded Medusa at Florence; then finally, near the end, wrestling control of the story from Elva, she sets fire, like a fiddling Nero, to Rome itself. 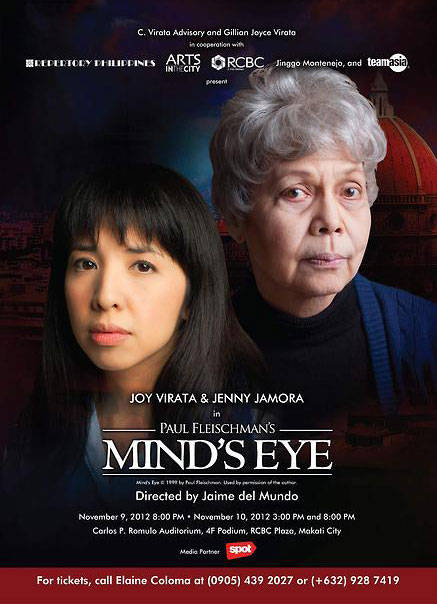 Joy Virata is, note for note, pitch-perfect as Elva, an intellectual ex-schoolmarm who can quote Milton at the drop of a hat, or, more likely in her case, an invalid’s cane. She totters and wheezes, utterly possessed by the character, to the extent that the penultimate old-lady-plus-wheelchair chase scene became unintentional comedy. She nails the self-absorbed pedant’s grating voice, and we can understand how she can wear down, with a never-ending verbal battering ram, Courtney’s angstiest defenses. Virata lives up to her character’s command to "make it real"; we never see Emmet, as he is brought to life entirely by Elva’s words, but thanks to the veteran actress’s skill, the husband, and every other small detail in the trip, take on flesh and walk onstage.

As Courtney, Jenny Jamora is more difficult to judge. Courtney is complicated and ambiguous, stubbornly refusing easy generalizations. Her Italian vacation isn’t merely for recreation...for her, it is, literally, "re-creation", the remaking of her own life. The three other actual supporting characters (not imaginary ones like Emmet and the mysterious "Edward") all mainly interact with her in three one-off scenes with no Elva present, leaving Jenny alone to peel back Courtney’s raw skin and expose her vindictiveness and vulnerability. At the start, it’s uncertain whether Jamora possesses enough range to illustrate this. Her script timing is slightly off, her petulance comes off as a bit one-note. But her body language-that sinister, suspicious turn of the head during that first scene, especially-sets the stage, and in the later scenes, Jamora comes into her own, adding heat and depth to a performance that eventually holds its own against Virata’s.

Given that a fictional work like a play takes place inside the shared imagination of the playwright, the actors, and the audience, Mind’s Eye-which becomes, in its most important moments, a play within a play within a play-is fertile ground to mine the dim boundaries between what’s real and what’s not. While the imaginary Italian trip is a sightseeing vacation, it also becomes a battleground: between young and old, between author and audience, between fact and fiction, between the brain and the heart, between what one wants and what one really needs.

Unfortunately, as an independently-financed production, Mind’s Eye only ran for one two shows, last November 9 and 10. Hopefully, the producers would be convinced to bring it back. We’re curious to snap up the book it was based on; Paul Fleischman’s young adult novel is written entirely in play form.