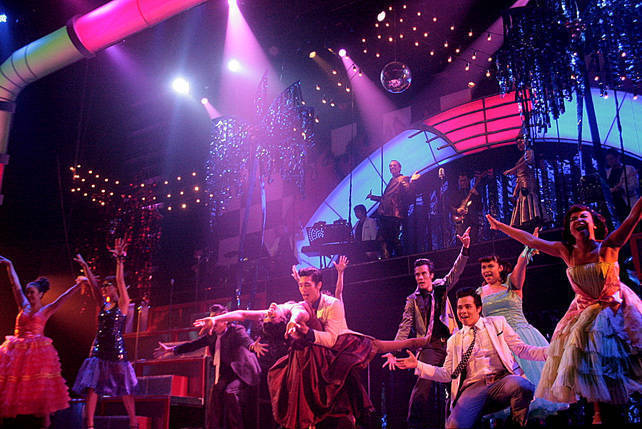 (SPOT.ph) I admit I had my doubts when Frencheska Farr was cast as Sandy Dumbrowski opposite veteran Gian Magdangal as Danny Zucko in 9 Works Theatrical's Grease. The GMA actress and singer had done no stage plays prior to Grease. During interviews, she would often refer to her lack of theater experience and how English is not her first language.

But during the press preview on Friday, Farr proved me wrong. She definitely shone bright during her solo numbers. She did her homework as she enunciated her lines well and utilized her powerful vocals. 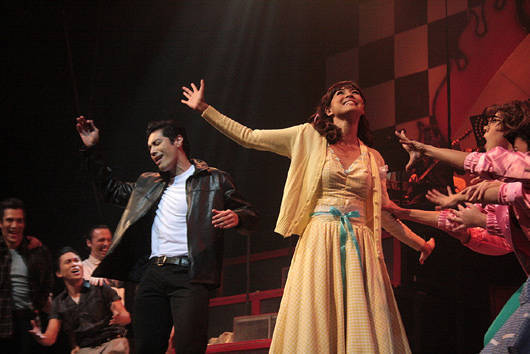 Theater Newbies
Farr isn't the only newbie in the group. Rafa Siguion-Reyna (you may recognize his famous last name) plays the T-Birds' second-in-command Kenickie, while Vince Lim (of the Ryan Cayabyab Singers) plays Doody.

All three played up their strengths well. I almost didn't notice Siguion-Reyna's unpolished singing skills because his charm and dance energy filled the stage.

Eye Candy
Although Magdangal and Farr were supposed to be the main attraction, my eyes couldn't help but wander and gaze at the other hotties-namely Carla Dunareanu (Magic 89.9 DJ, whose acting credits include The Kitchen Musical and Boeing Boeing) who portrayed Marty of the Pink Ladies with the right comedic timing, Iya Villania, who proved she has a flair for playing the bad girl for a change, and Cosmo hunk Siguion-Reyna, who makes a standout T-Bird.

Director Robbie Guevara was right when he said that Siguion-Reyna has the potential to become a TV matinee idol. Let's hope the theater industry gets to keep him for a while longer before showbiz comes a callin'. 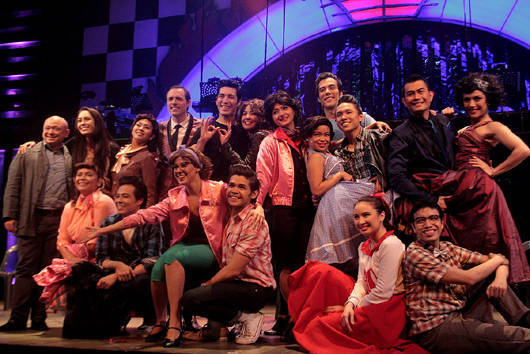 More Than a High School Musical
The high school plot may be overused on TV and movies these days, but Grease is definitely not your typical Glee show. With its Riverdale-like setting, vintage wardrobe, pre-social networking courtship, and of course, catchy rockabilly tunes, Grease will tempt you to jump onstage and boogie like you were part of Elvis' generation.

Each character played their roles well and kept their high energy up throughout the show. Plus points for the impeccable chemistry of the two main posses-the T-Birds and Pink Ladies. Other notable cast members include Reb Atrero as the mischievous "mooner" Roger; Sarah Facuri as the compulsive eater Jan, who, staying true to her craft, gobbled up real food onstage; Mark Tayag as girl-crazy Sonny Latierri; and Sab Jose as the highly caffeinated cheerleader Patty Simcox.

Even if you're familiar with the 1978 movie version starring a young John Travolta and Olivia Newton-John, the stage version is slightly different in terms of certain song numbers and the progression of the storyline. The production also surprised us with a few tricks up their sleeves, which I won't spoil for you. 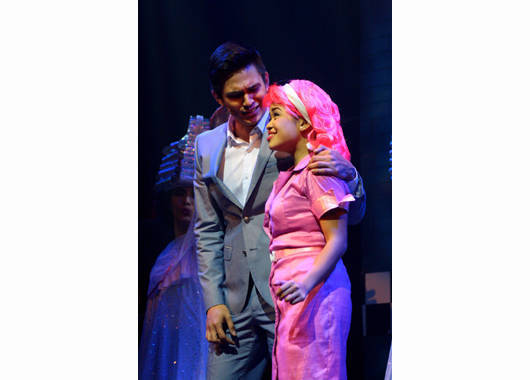 There will be a different Teen Angel for every show. On Friday night, Tom Rodriguez played the cameo role in one scene with Frenchie (Peachy Atillano)

Teen Angel Tally
One secret I can spill is that a guest actor will play the role of Teen Angel in the poignant scene with beauty school dropout, Frenchie, portrayed perfectly by the bubbly Peachy Atillano. There will be a different Teen Angel actor per show.

In the press preview, we swooned at the sight of a dapper Tom Rodriguez singing the lines of "Beauty School Dropout." The night before, it was Franco Laurel who did a cameo, while JM Rodriguez graced this weekend's show. 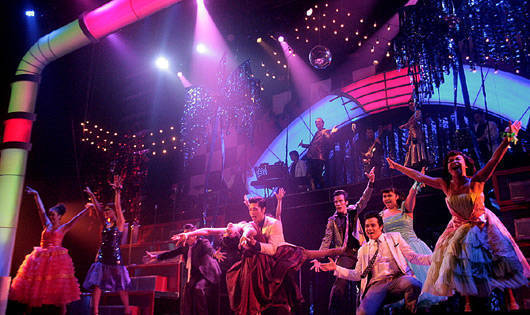 Roaring 50s
Set and costume designer Mio Infante got every 50s detail down pat-from the high-waisted pants and pedal pushers to the vintage magazine covers that the Pink Ladies were browsing. He also extended the space by creating a two-floor stage and cleverly placing the orchestra on the upper level.

The first act captivated the audience with high-energy numbers such as "Greased Lightning" and "You're The One That I Want," while the second act mellowed down with "We Go Together" and "All Choked Up." Overall, Grease was definitely the word and made for an electrifying night.

Grease will run from November 9 to December 1, 2013 at the Carlos P. Romulo Auditorium, RCBC Plaza, Makati City. Tickets are available via Ticket World and 9 Works Theatrical. Visit 9workstheatrical.com and facebook.com/9workstheatrical for more info.