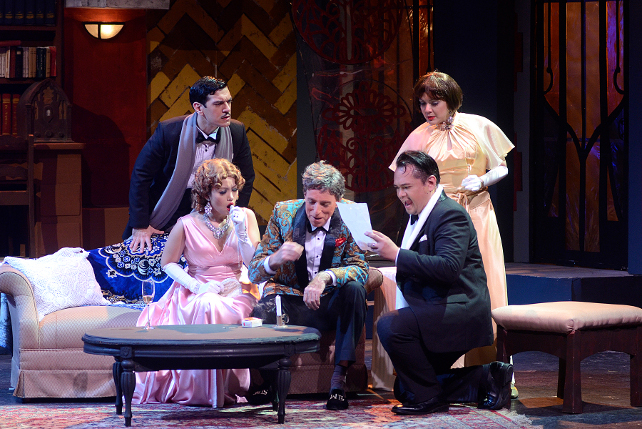 THEATER REVIEW: The Game's Afoot is a hilarious whodunit romp

The word "madhouse" doesn't even begin to describe it. 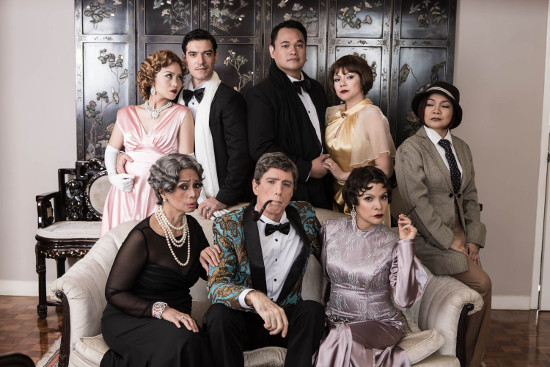 (SPOT.ph) It shouldn’t come as a surprise that Sherlock Holmes remains one of the most enduring characters in literature. Since Sir Arthur Conan Doyle’s first Sherlock story in 1887, the famed character never really left the public eye. These days, we associate Sherlock with his modern iterations, from Robert Downey, Jr. to Jonny Lee Miller and Benedict Cumberbatch. But back in the character’s heyday, Conan Doyle himself endorsed one man as the face of Sherlock: Broadway star William Gillette—who, incidentally, is the protagonist of Repertory Philippines’ 79th season premiere, The Game’s Afoot.

The plot follows Gillette in his palatial Connecticut home as he attempts to solve the mystery behind the sudden death of one of his Broadway show's crew members. Accompanying Gillette in his search for answers are his fellow actors in the cast, a peculiar police detective, a mean-spirited theater critic, and Gillette’s mother.

Repertory Philippines enlists an impressive roster of actors who each inject life into playwright Ken Ludwig’s memorable characters: Leading the cast is Paul Holme whose William Gillette is delightfully eccentric; an oddball whose 20 years of playing Sherlock Holmes have begun to bleed into his own personality. Joy Virata is a hoot in her role as Gillette’s dotty, doting mother. 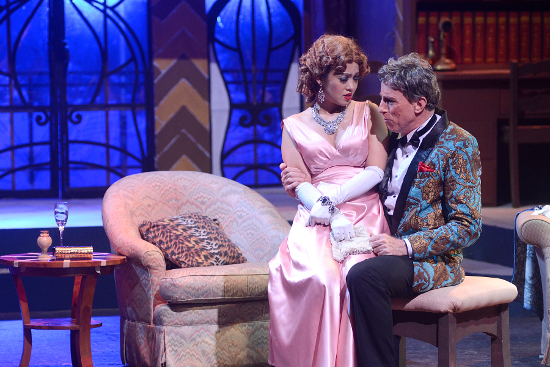 Pinky Amador, playing the deliciously sharp-tongued Daria Chase, turns the ferocity up to eleven, and adds a side of hamminess for good measure. Meanwhile, Jeremy Domingo (Felix Geisel), Christine Flores (Madge Geisel), Hans Eckstein (Simon Bright), Mica Pineda (Aggie Wheeler), and Natalie Everett (Inspector Goring) round out a stellar cast that manages to coax out all the wit and comedy of Ludwig’s richly written play.

It begins a bit slowly while the characters—and their relationships to one another—are introduced, arriving in intervals at Gillette's home on Christmas eve. But the pace picks up, as dinner parties often do, as soon as everyone's had a bite to eat. Ludwig’s script (winner of the 2012 Edgar Award for Best Play from The Mystery Writers of America) elevates what could have been a generic “whodunit?” into a hilarious romp replete with genuinely surprising twists and clever, lighthearted dialogue that parodies tropes in the murder-mystery genre. 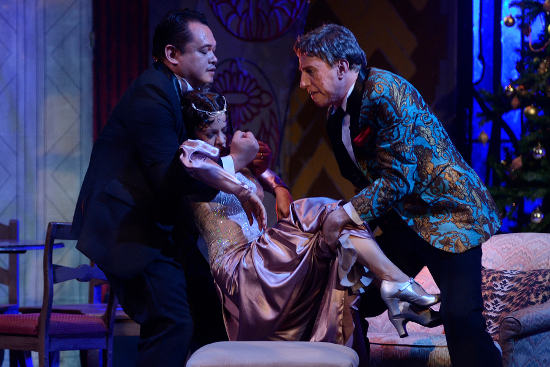 Repertory’s production takes full advantage of the play’s 1936 setting with its luscious set design. Once the curtains opened to reveal the full set depicting the Gillette house’s living room (designed by director Miguel Faustmann), there were audible gasps of excitement from the audience. The Greenbelt 1 Onstage Theater’s proscenium is decked out with a golden Gatsby-esque Art Deco pattern that screams “Old World grandeur.” Bonsai Cielo’s costumes—silky, intricately detailed dresses and handsome suits—also capture the opulence of the early 20th Century. John Batalla’s lights and TJ Ramos’ sounds, on the other hand, work together to set the differing tones of the show—the “madhouse,” as the cast describes it.

All in all, The Game’s Afoot is an entertaining, tongue-in-cheek satire that promises to keep audiences laughing and guessing well until the final twist is revealed. Whether it’s the strong performances or the solid comedic moments, it’s a murder-mystery that makes a great debut for Rep's 2016 season.