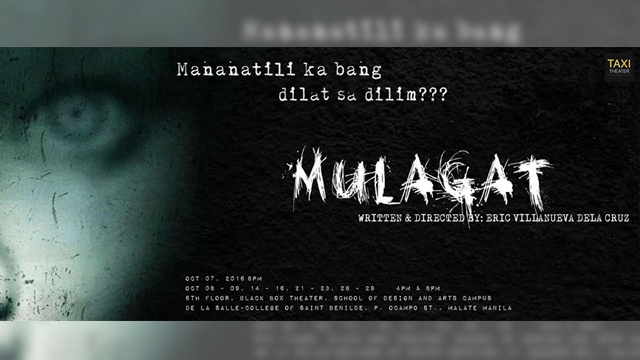 Are you brave enough? Local theater group experiments with darkness in this eerie play

Mulagat is an early Halloween treat! 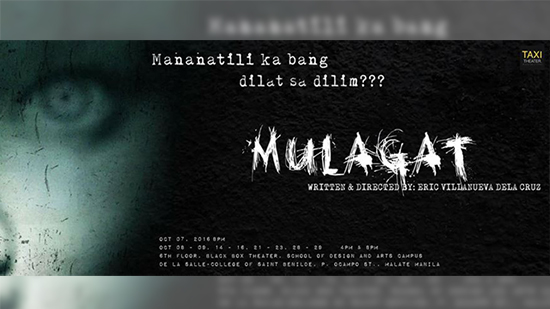 (SPOT.ph) TAXI Theater, with its tag line "Theater. Applied. Experiential. Immersive," presents the horror production Mulagat this October 2016 at the Benilde School of Design and Arts Campus in Manila. The Visayan word "mulagat" means staring with eyes wide open. The play integrates the use of "theater-in-the-dark," an experimental type of production design in which portions are performed in total darkness.

In a completely different but somewhat similar production entitled Theatre in the Dark that was staged in Los Angeles in 2012, Artistic Director Ron Sossi explained how the technique is used: "Maybe somebody lights a match, or there's one part where you see just the little bit of a lit car radio with two people sitting in a car. Just here and there, little tiny pieces. But [otherwise it's] 99% in the dark. Totally in the dark."

The story follows graduating architecture student Nico (Michael Angelo Castro/Tim Castillo/Japoy Dones) who wakes up in the middle of the night because of strange sounds emanating from the hallway in his condo building. He investigates this and stumbles upon a young girl looking for her brother. We all know that this is a recipe for a series of eerie encounters. 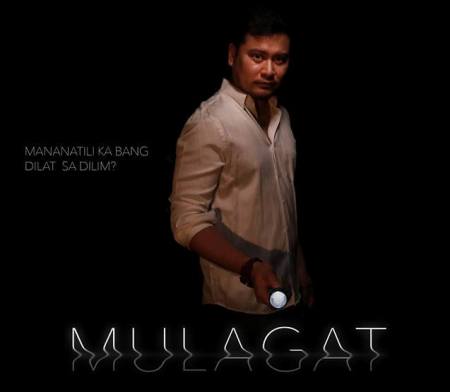 Mulagat is the maiden play of TAXI Theater and was previously staged in 2012 by technical theater students of the De La Salle-College of Saint Benilde. It is written and directed by Eric Villanueva Dela Cruz.