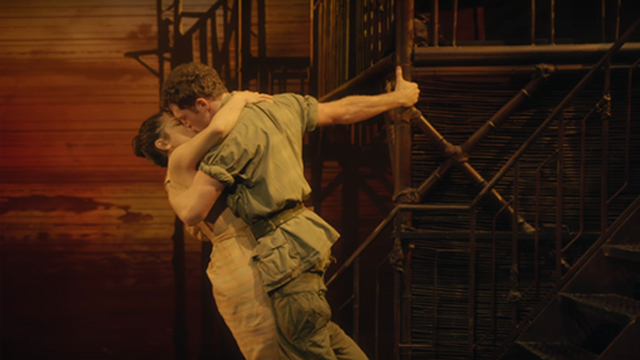 You can watch Miss Saigon in cinemas this November

(SPOT.ph) Miss Saigon, a musical by Claude-Michel Schönberg and Alain Boublil, first captured the hearts of theater fans when it premiered at Theatre Royal, Drury Lane, a West End theater in London in 1989. On September 22, 2014—25 years after its world premiere—the original cast (Lea Salonga, Simon Bowman, and Jonathan Pryce) performed in front of a sold-out audience at London's Prince Edward Theater. It was a magical night and Filipino fans can now get a chance to see the recorded video of Miss Saigon 25th Anniversary Performance on November 12 and 13 at select SM Cinemas.

It tells the tragic love story of 17-year-old Kim and American soldier Christopher "Chris" Scott in 1970s Saigon during the Vietnam War. Miss Saigon was onstage for a decade in the West End, and went on to have 4,000 shows on Broadway in New York. Our homegrown artists Rachelle Ann Go (as Gigi) and Tanya Manalang (an alternate of Kim) were also part of the West End revival which closed on February 2016 after more than 700 shows.

The cast of the filmed production includes Jon Jon Briones as The Engineer, Eva Noblezada as Kim, Alistair Brammer as Chris, Hugh Maynard as John, Tamsin Carroll as Ellen, and Rachelle Ann Go as Gigi. There's also a 35-minute preview of the 25th anniversary gala with Salonga, Bowman, and Pryce.

Movie Theater Sm Sm Cinema West End Miss Saigon
Your Guide to Thriving in This Strange New World
Staying
In? What to watch, what to eat, and where to shop from home
OR
Heading
Out? What you need to know to stay safe when heading out