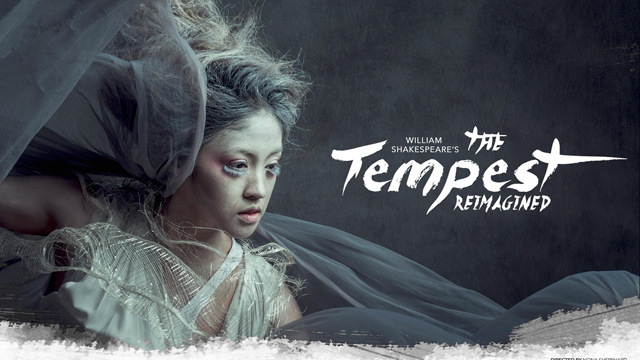 Theater Review: The Tempest Reimagined is a strong mix of two beautiful languages

The show runs until December 4 at PETA.

(SPOT.ph) William Shakespeare is one of the world's greatest writers in the English language. He has written more than 30 plays, more than a hundred sonnets, and a couple of narrative poems in his lifetime, and most of them are read, adapted, and performed worldwide up to this day. One of these is The Tempest now retold by the Philippine Educational Theater Association through The Tempest Reimagined.

It is the product of an international collaboration between artists from the Philippines, the United Kingdom (represented by the British Council and the Royal Academy of Dramatic Art), and even Japan (through Japan Foundation) and is a blend of two beautiful languages: one is the conversational (and sometimes comedic) Filipino and the other is the highfalutin but classic Old English. These two vehicles also merge two stories, that of Shakespeare's Prospero, a sorcerer and deposed Duke of Milan who's on a mission to seek revenge and take over the castle, and that of the Philippines' great tempest—Yolanda in 2013. 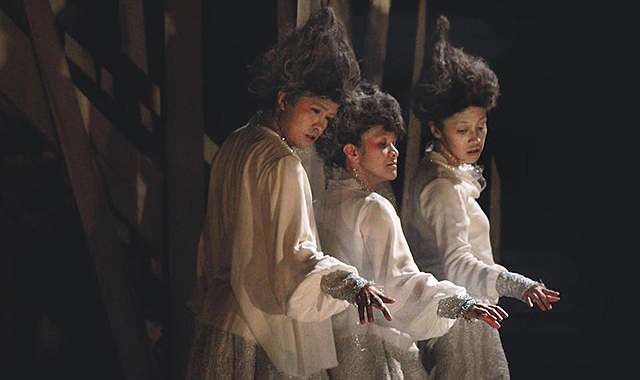 Jaime (Norbs Portales) narrates the interweaving stories from his small fishing village in Tacloban, Leyte. He breaks the fourth wall and often talks to the audience and, sometimes, even lets the two narratives from opposite side of the world (and opposing realities) interact with each other. His lines (and ad libs) make viewers laugh (a bit uncomfortably) and cry, both understandable responses to the calamity that killed thousands of Filipinos. We later find out from Nona Sheppard, artistic director of the Royal Academy of Dramatic Art, that Jaime is based on a real-life fisherman who survived Yolanda.

It should also be noted that, unlike the staging of Shakespeare's drama and comedy in the past, The Tempest Reimagined's Prospero is played by a woman, theater veteran Cecilia Garrucho. In addition, instead of the King Alonso of Naples, there was Alonsa (Jenny Jamora); and instead of Sebastian, Alonso's treacherous brother, there was Sebastiana (Meann Espinosa). "I’m very conscious of making sure women have an equal voice in theater. You always want to try to get more women into it,” Sheppard said about this creative choice. She co-writes The Tempest Reimagined with Liza Magtoto. There are also subtle attacks on how the government handled (or mishandled) the controversial Yolanda funds, a topic also emphasized in Magtoto’s previous PETA production Rak of Aegis. 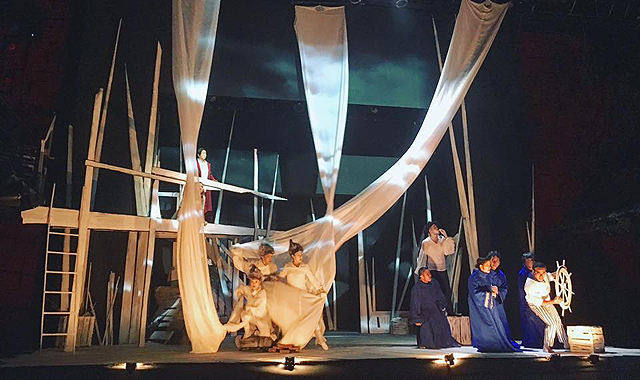 Bodjie Pascua (as Gonzalo) and Renante Bustamante (as Antonio) join Jamora and Espinosa in the Shakespearean part of the adaptation. All four regularly switch to the roles of Yolando survivors, done with swift movements through either changing of the robes or synchronized choreography.

The merging of the stories was made more magical by the lighting design of Japanese Tsuguo Izumi. The play on various colors of lights blend well with the all-white set—carefully timed flashes for lightning, warm spotlight that symbolizes a new day, and even blue ones that come from where Taclobanons hide to get through the storm. The musical score was as haunting as the lights, an excellence you can only expect from the one and only Teresa Barrozo.

The Tempest Reimagined reminds us to never forget—may it be an age-old Shakespearian drama about revenge or a real-life event about survival. History, after all, shapes our future.

The Tempest Reimagined runs until December 4 at the Philippine Educational Theater Association, No. 5 Eymard Drive, New Manila, Quezon City. Tickets, priced at P800 to P1,300, are available through Ticketworld.

Peta The Tempest Reimagined Shakespeare Liza Magtoto Teresa Barrozo
Your Guide to Thriving in This Strange New World
Staying
In? What to watch, what to eat, and where to shop from home
OR
Heading
Out? What you need to know to stay safe when heading out