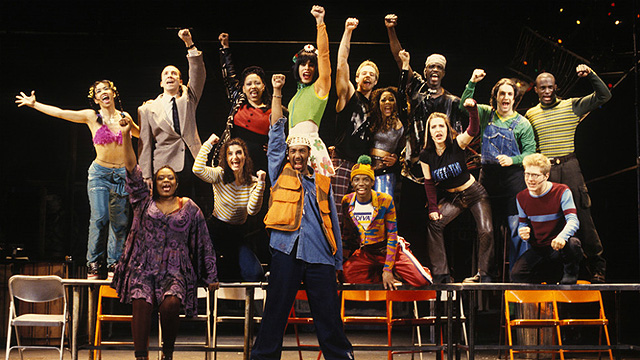 If You Love Rent the Musical, Don't Miss This TV Production

Get ready to sing along to "Seasons of Love."

(SPOT.ph) Tony Award-winning musical Rent is probably one of the Filipinos' favorite musical theater productions. It was staged three times by 9 Works Theatrical—twice in 2010 and once in 2011 at the RCBC Plaza in Makati City. The film adaptation directed by Chris Columbus in 2005 got mixed reviews, but the live filming of the final Broadway performance in 2008 was a big hit. So the upcoming live musical production of Rent on Fox TV scheduled on January 27, 2018 (7 p.m. to 10 p.m. ET live/PT tape-delayed) is a much-awaited event for Rentheads around the world.

The American television network previously produced Grease: Live in January 2016, making it their first venture in "" (as quoted from New York Daily News). It was , televised remake of the 1978 movie musical. Grease: Live was received positively, with fans raving about the performances of it stars Vanessa Hudgens, Carly Rae Jepsen, Aaron Tveit, and Julianne Hough. The U.S. $ 16-million production that spans 14 stages and 20 acres was well worth it.

We can only hope the same for Rent on Fox.

The original Broadway cast of Rent

Jonathan Larson's Rent, first seen in 1993 at the New York Theatre Workshop, is loosely based on Giacomo Puccini's opera La Bohème. It follows a group of impoverished young artists trying to survive in New York City's East Village amid threats of eviction, gentrification, and the HIV epidemic. Some of its most popular songs are "Seasons of Love" and "La Vie Boheme." It earned Tony Awards for Best Musical, Best Book of a Musical, Best Original Score, and Best Performance by a Featured Actor in a Musical when it premiered on Broadway in 1996.

Rent: Live will air on January 27, 2018, 7 p.m. on Fox. A Christmas Story and Jesus Christ Superstar are also expected to be broadcast on December 17, and April 1, 2018, respectively. For updates, follow Rent on Fox on Facebook.

Jonathan Larson Theater Television Musical Fox Tv Rent
Your Guide to Thriving in This Strange New World
Staying
In? What to watch, what to eat, and where to shop from home
OR
Heading
Out? What you need to know to stay safe when heading out