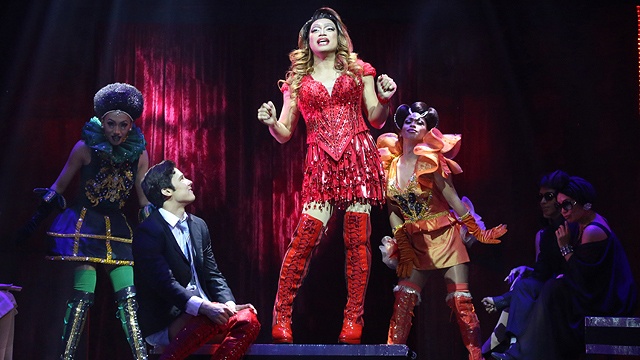 The musical runs until March 18. 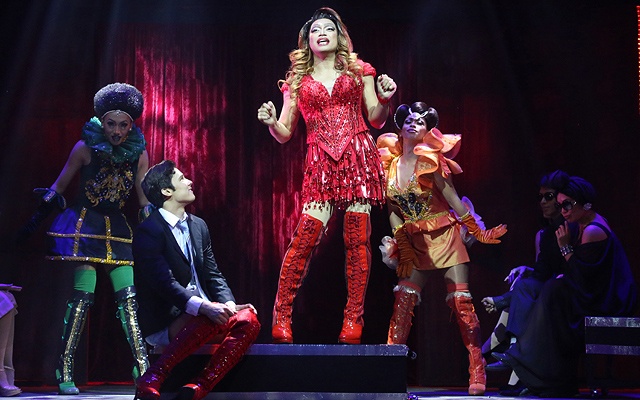 "It's so nice to know that you can just be yourself." This was Sophia's—eight-year-old daughter of theater actors Mikkie Bradshaw-Volante and Nyoy Volante—reaction after watching Kinky Boots when it first ran in June 2017 at RCBC Plaza in Makati City. Now that the Grammy Award-, Olivier Award-, and Tony Award-winning Broadway musical is having its second run until March 18, more people (and kids) can hopefully experience the same epiphany.

Volante reprises his role as the drag queen and shoe designer Lola, while Bradshaw takes over the role of Lauren from Yanah Laurel—who was busy for Chitty Chitty Bang Bang's rerun in February. Kinky Boots is based on the 2005 British film of the same title directed by Julian Jarrold. It tells the true-to-life story of Charlie Price (Laurence Mossman), who reluctantly inherits a shoe factory from his late father. He meets cabaret performer and drag queen Lola who helps him save the company from bankruptcy by designing high-heeled boots for fellow drag queens. Given that Price & Son is located in the suburbs of Northhampton, it wasn't easy to break the norms.

"Some parents will ask me if it's okay for kids to watch it. For me, that's really a personal choice—if you think you're open to that with your kids. It has a beautiful message beyond [the story of] a drag queen," narrates Bradshaw in an interview with SPOT.ph.

For some families, especially in a predominantly Catholic and conservative country like the Philippines, it may (ironically) not be easy to talk about tolerance and acceptance towards members of the LGBTQ+ community. But for the Volantes, it was important that their kid sees the show, not only because her parents are headlining it but also because "the values in Kinky Boots are something [they] really want her to think about."

Growing up in a progressive family, Sophia easily latched on to the characters and story of the musical. "This particular character, [Lola], she enjoys for some reason. Yes, it's a big spectacle of a musical, but there's also a lot of heart to it. And it has these values that, I think, we as a family feel very strongly about. We're very vocal about that with our daughter, we make sure to discuss these things to the point that sometimes she just goes 'I get it, Mom. It's okay if I'm a lesbian,'" Bradshaw explains laughing.

Kinky Boots is popular not only for its memorable songs (written and composed by pop culture icon Cyndi Lauper) but also for its touching themes: family, relationships, and sexuality. If an eight-year-old's takeaway is all about self-acceptance, then maybe it's just what everyone needs to see right now.