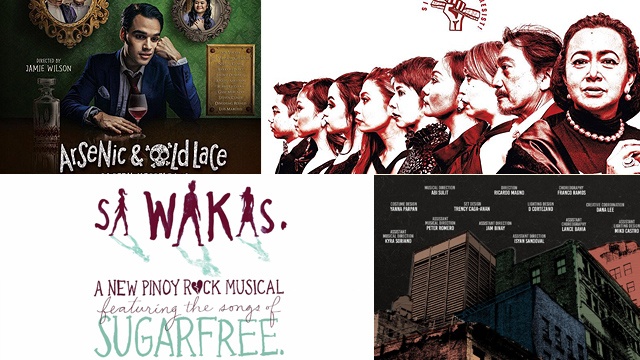 Theater in Manila: Exciting Shows to See Onstage This April

Aside from The Lion King!

(SPOT.ph) Most of you may have seen Disney's The Lion King live at Solaire Theater in March (still running until May, by the way) and have since hungered for more theatrical performances. This month, theatergoers have a whole buffet to choose from—a Broadway play, a Filipino rock musical, a dark comedy, and a number of all-original one-act shows. 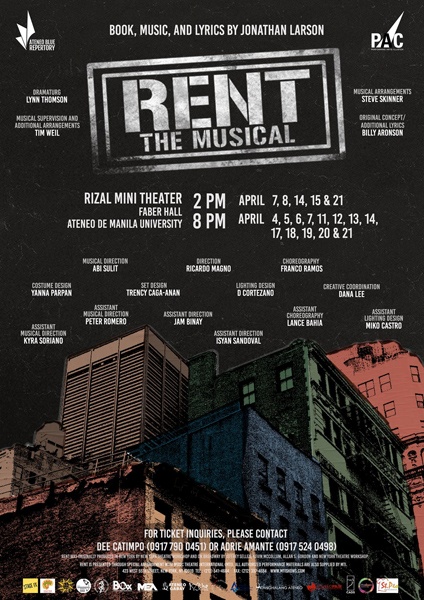 No need to wait for "five hundred twenty-five thousand six hundred minutes" to watch this Tony Award-winning musical as Ateneo Blue Repertory stages Rent for the theater group's season finale. Set in the '90s, it follows the lives of struggling artists in New York amid gentrification and the AIDS epidemic. 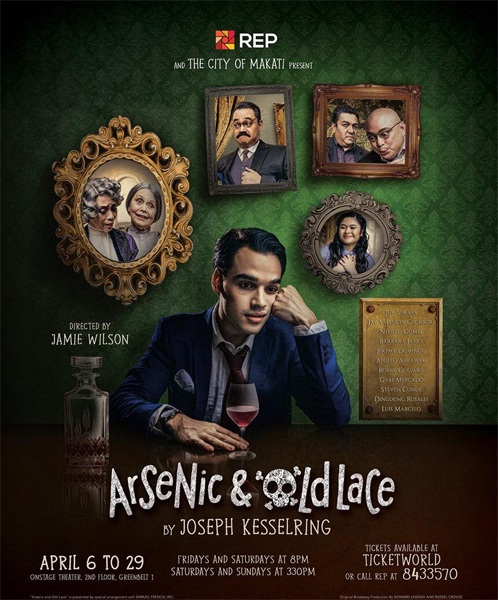 Completing Repertory Philippines' smorgasbord of theater shows, Arsenic and Old Lace is an American dark comedy that revolves around the Brewsters who descended from the first English Puritans and has now spiraled into a family of insane homicidal maniacs. It's up to Mortimer (Nelsito Gomez) to figure things out before his two spinster aunts—Abby (Joy Virata) and Martha (Jay Valencia Glorioso)—murder another lonely old man with their arsenic-laden homemade wine.

Arsenic and Old Lace runs from April 6 to 29 at Onstage Theater, Greenbelt 1, Makati City. Tickets, priced from P1,200 to P1,500, are available through Ticketworld. 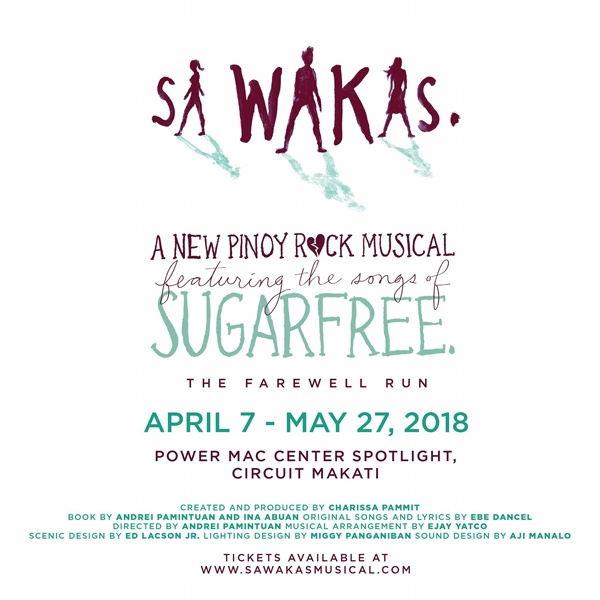 First staged in April 2013 then again in January 2017, Sa Wakas draws a conclusion through its last ever run this April 2018. The musical based on songs by Sugarfree and Ebe Dancel follows Topper (Vic Robinson, Pepe Herrera) who lives with long-time partner Lexi (Kyla Rivera, Cara Barredo). With unsolvable arguments taking their toll on the relationship, it was only a matter of time before a third party comes into the picture: Gabbi (Justine Peña, Maronne Cruz), a fun-loving and artsy-magazine writer. Sounds familiar?

Sa Wakas runs from April 7 to May 27 at Power Mac Center Spotlight, Circuit Makati, Makati City. Tickets, priced from P800 to P1,500, are available through Ticketworld. 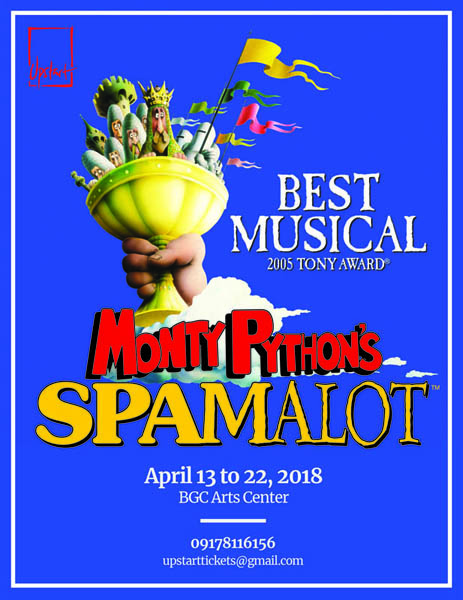 Spamalot, based on the British slapstick comedy film Monty Python and the Holy Grail, follows the classic medieval legend of King Arthur's quest alongside his knights. The difference? There are annoying Frenchmen, a make-shift horse making clappity-clap sounds, and a killer rabbit. 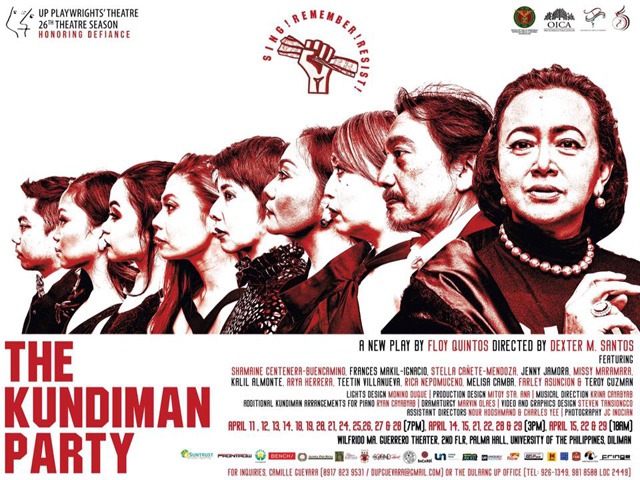 How can art start a revolution? Let The Kundiman Party show you the way. Now as relevant as ever, it follows retired singer Maestra Adela Dolores (Shamaine Centenera-Buencamino)—who believes in the transformative power of the kundiman—and young tech-savvy activist Bobby (Kalil Almonte) in an eccentric form of protest. 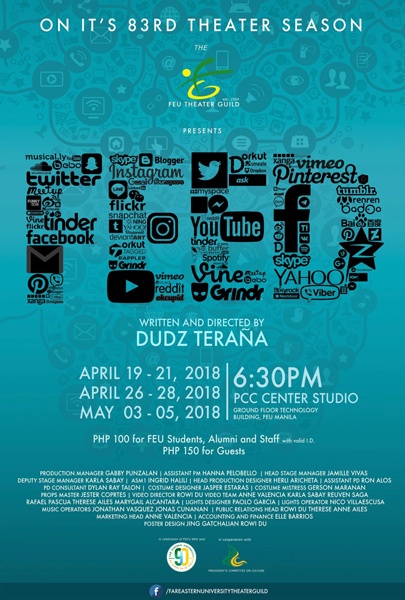 Inspired by the works of National Artist for Literature Nick Joaquin, Feed is a multimedia performance of citizens-turned-netizens who are widely dependent on social media in the digital era. It is written and directed by Dudz Teraña. 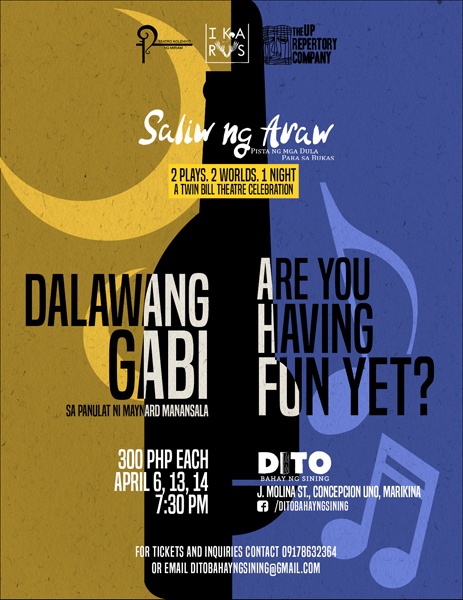 Dalawang Gabi, first staged in 2015 at the Virgin Labfest, focuses on the complicated love story between middle-aged teacher Debbie and her former student Lester. It is set on two scenes that are two years apart, thus the title.

Are You Having Fun Yet?

UP Repertory Company's devised performance of Are You Having Fun Yet? delves into the dynamics of the Filipinos’ favorite pastime—videoke. It tries to answer the questions that are otherwise ignored about this intriguing device: Why are there always women dancing or running by the beach? Why is the voice saying the numbers that of a female? Why do we pay coins in the videoke? 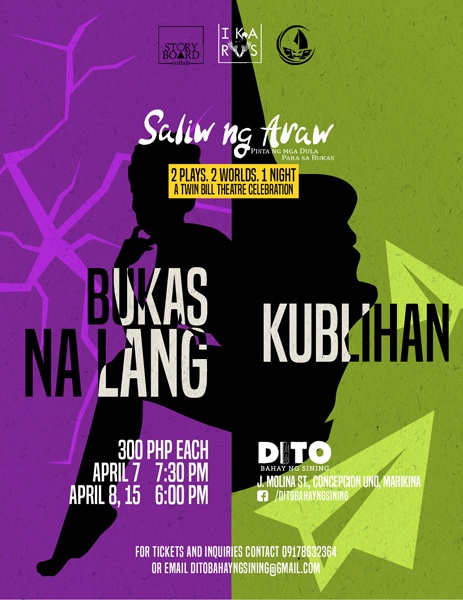 Storyboard Junkies' Bukas Na Lang is an exploration of how dreams are made and achieved. It follows the story of three women and the almost impossible task of completing their life-long journey.

Also from the Virgin Labfest in 2015, Kublihan looks into the ups and downs of a high school friendship. Two boys—one a freshman, the other a senior—painfully say goodbye while cherishing their last moments together in a secret hiding spot before graduation day.

Carlo Pacolor Garcia's Tatlong Monologo presents a series of soliloquies—a man playing with death while holding a knife by the window, a naked man reading on a chair, and a woman that you can only see through a keyhole. Each monologue tries to knock some sense into the audience through a torrent of angered words.

Mixkaela Villalon's Streetlight Manifesto looks into the subjective nature of truth and justice—which still rings true years after the play was first staged at the Virgin Labfest in 2011. Every night, a streetlight is the lone witness to secret meetings between two hired killers responsible for the string of murders in Manila. Every day, a dead body turns up at the same lamppost. The investigations remain unsolved and the body count continues to rise. 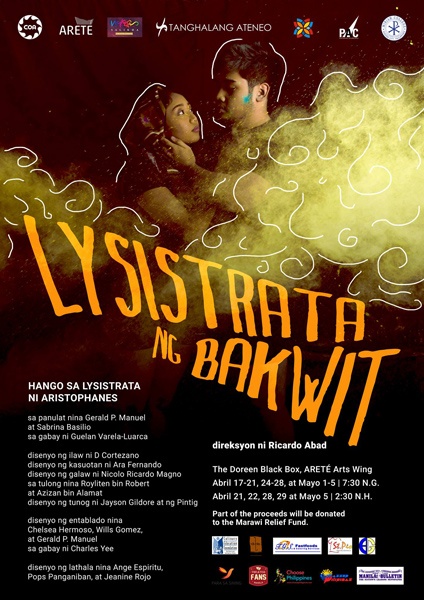 The new Doreen Black Box at Areté in Ateneo de Manila University opens its doors with the staging of Lysistrata ng Bakwit. Inspired by Aristophanes' Greek classic Lysistrata, the play is set in an imaginary war-torn Philippine province where women evacuees fight for their ancestral lands and commit to stop the ongoing calamity.