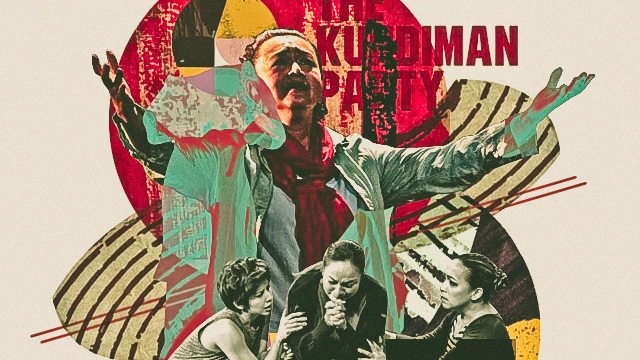 Dulaang UP’s The Kundiman Party: A Scorchingly Entertaining Look at the Role of Art in Turbulent Times

(SPOT.ph) There is a moment, when Maestra Adela (Shamaine Centenera Buencamino), makes an appearance in full splendor and thunders: “Nasaan si Bobby?!” Her friends collapse in laughter at the melodramatic entrance and echo her line, giggling, while the Maestra retreats upstage to wait for Bobby (Kalil Almonte) to actually arrive. It’s a wonderful moment, because it’s played for laughs: Within the play, the friends are in on the joke; but the play is in on the joke too, poking fun at histrionic divas and overdramatic entrances.

The play might be an ode to the kundiman, what to most modern Filipinos living in the city are for tourists at hotel music lounges or a quaint nostalgic blast from the past. As with the scene involving the Maestra, the play is intensely self-aware; but instead of apologizing or defending the old-fashioned nature of the kundiman, it places the question front and center. What is the place of the kundiman in modern Filipino society? More broadly, what is the place of art in contemporary society—and by that we mean a politically charged world, where the urban middle class are outraged by extrajudicial killings, and struggling to stay relevant; but finding, at the same time, that the old means of resistance seem out-of-touch and ineffective.

Maestra Adela is a retired operatic singer, having sung Puccini at La Scala in her glory days, and benefitted, as many did, from the artistic patronage of the Marcoses. She eventually grew disenchanted and began using her talents singing at rallies against the dictatorship, wearing it out in the process. She now lives in apolitical retirement, teaching the kundiman at her home while her friends are rallying against the current administration. Through the boyfriend of one of her students, she decides to speak out again: and this time, on social media.

While seeing the video graphics of Facebook, Twitter, and Instagram in a projected montage of gathering likes and virality is part of what makes the play feel immediate and contemporary, it is also what is most likely to date the play—20 years on, will these still be around? But the themes of the play: the role of art in turbulent times and its relation to power; the choice for its most talented practitioners to be co-opted in bolstering an authoritarian regime or in protesting against it—and the fine line between the two—will always be relevant and important questions. In one particularly blistering scene, Stella Canete-Mendoza, whose understated performance as an agreeable, motherly foil to two other fiery women who make up the barkada, takes center stage and breaks down: She just wants a quiet life, to live with her daughter in Canada. Any middle-class activist, exhausted from defiance, can relate.

We have, as a people, always made our best work under adverse conditions: from the “bodabil” under Japanese occupation to Lino Brocka’s masterpieces, we have mastered the poetics of protest and discontent—perhaps because we have not had enough protracted periods between enemies, we are less proficient at exploring the poetics of peacetime. Floy Quintos is one of the directors and playwrights who have done both: His plays delve into the depths of Philippine culture while retaining a core of conflict and sense of theater; in one turn he can be erudite and vulgar. He poses so many questions, but leaves us to figure out the answers: although, as Maestra Adela comes to terms with the mutilated fingers of her pianist, we are given a clue: “When the fighting is over, who will play music?”

The Kundiman Party is, like the double-entendre of the title, both profoundly political and scorchingly entertaining. It has been announced that it will be Floy Quintos’ last play—let us hope that, like the divas he writes about, he will have many, many more “last plays” to come.

The Kundiman Party Floy Quintos Theater University Of The Philippines Dulaang Up
Your Guide to Thriving in This Strange New World
Staying
In? What to watch, what to eat, and where to shop from home
OR
Heading
Out? What you need to know to stay safe when heading out