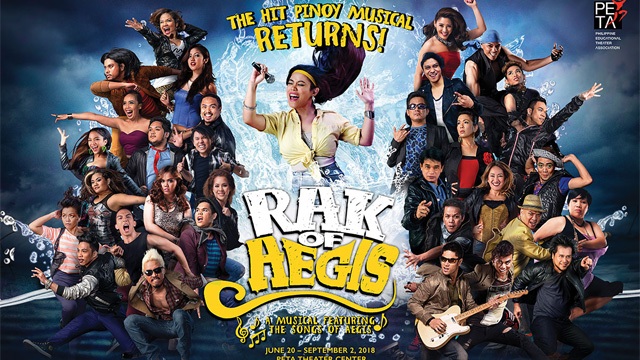 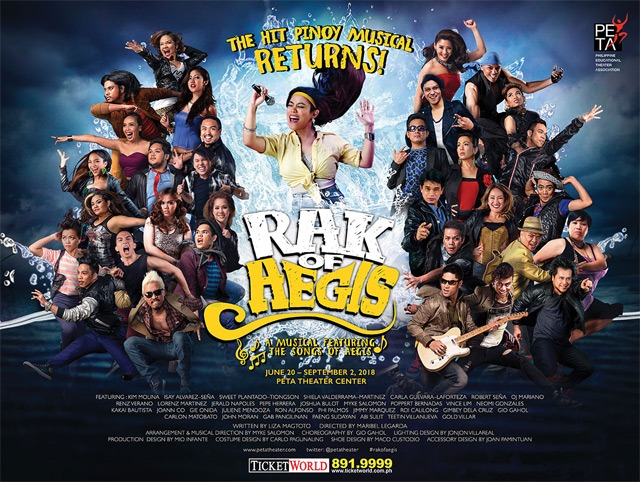 (SPOT.ph) In case—for some unknown reason—you never found the time to watch Philippine Educational Theater Association's Rak of Aegis in its past five runs, this is your chance! The legendary Pinoy musical is set to return to the stage at the PETA Theater Center in Quezon City on June 20 with new additions to its talented cast.

Most of the new actors joining the cast are from the theater company's talent search and auditions titled Rak of Aegis Hu Got Talent, The Search for the Next Rakstar, which started in March. After a grueling process, the list of hopefuls was cut down to 50 in April, then to 20 in early May. During the press conference on May 22, the last nine men and women standing were revealed as members of Rak of Aegis 6.0's cast—Princess Vire and Shaira Opsimar (alternating with Kim Molina for the role of Aileen); Remus Villanueva (alternating with Poppert Bernadas, Vince Lim, and Myke Salomon for the role of Kenny); Kent Pontivedra (alternating with Joshua Bulot, Pepe Herrera, and Jerald Napoles for the role of Tolits); and Adrian Lindayag (alternating with Ron Alfonso, Jimmy Marquez, and Phi Palmos for the role of Jewel). Crystal Paras, Gil Aguedan, Matel Patayon, and Marielle Mamaclay round up the ensemble.

Rak of Aegis strings together 20 songs from '90s band Aegis to tell the story of fictional Barangay Venizia, which has been submerged in floodwater for two months. Aileen, one of its residents, tries to escape her perpetually flooded town by becoming a singing sensation on YouTube. Things get complicated when a politician tries to make himself a savior by bringing relief goods and empty promises. Sound familiar? Well, that's because it's real life: Rak of Aegis is inspired by events that happened during Typhoon Ondoy in 2009—from the tragedy that struck to the relief efforts and recovery that gave everyone a spark of hope. Nine years later, its story still rings true.

Rak of Aegis runs from June 20 to September 2 at the PETA-Phinma Theater, Philippine Educational Theater Association, No. 5 Eymard Drive, New Manila, Quezon City. Tickets, priced from P1,000 to P2,300, are available through Ticketworld.

Musical Theater Rak Of Aegis Philippine Educational Theater Association Peta
Your Guide to Thriving in This Strange New World
Staying
In? What to watch, what to eat, and where to shop from home
OR
Heading
Out? What you need to know to stay safe when heading out