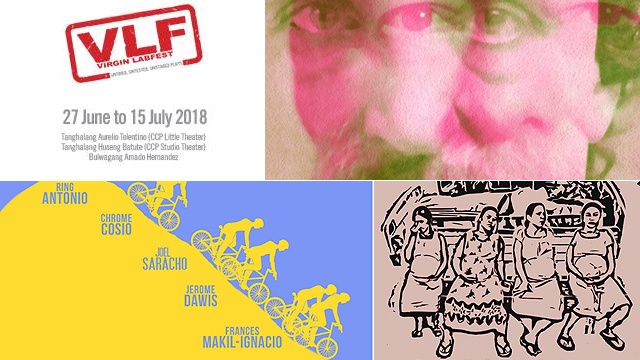 The SPOT.ph Guide to Virgin Labfest 2018

You have three weeks to catch it.

(SPOT.ph) The Virgin Labfest returns on its 14th year of staging exciting and provcative one-act plays within the walls of the Cultural Center of the Philippines. As in the previous editions, viewers are in for a lineup of "untried, untested, unstaged" theatrical pieces that have all kinds of unexpected plot twists and character quirks. The festival runs from June 27 to July 15 at the Tanghalang Aurelio Tolentino and Tanghalang Huseng Batute. 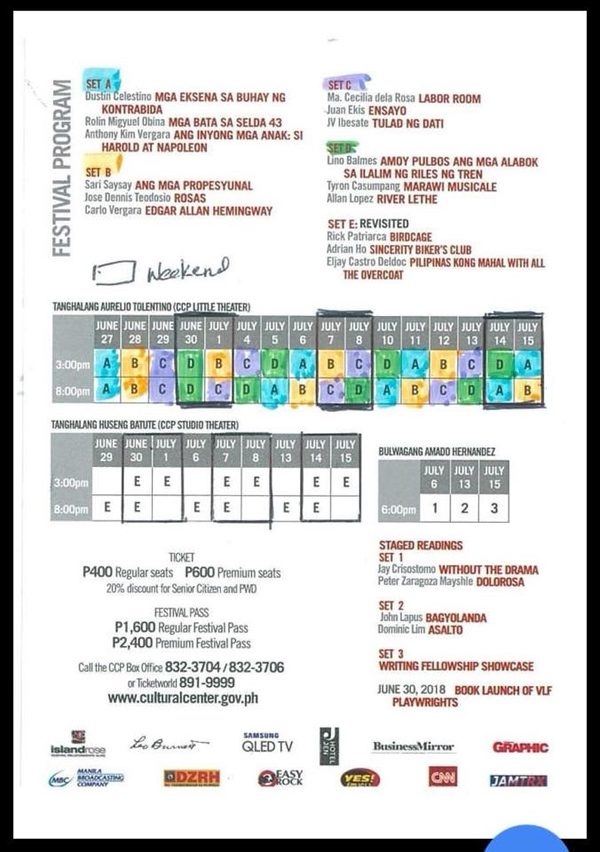 In Mga Eksena sa Buhay ng Kontrabida, tables are turned as the story puts the villain under the spotlight. It follows the life of Jake (Jay Gonzaga) who—like any other villain—is violent, selfish, and reckless; and how his friends and family try to figure him out.

In this sci-fi play, two kids from the slums—Philip (Tomas Santos) and his younger brother, Ino (JM Canlas)—were kidnapped by aliens. Their plan to escape the alien's prison cell crashes when they meet Ed (Rafa Tibayan).

Just before leaving the house for an out-of-town trip, Harold (Joshua Tayco) starts a conversation with his mother (May Bayot) about a former college schoolmate who was brutally murdered. We later learn about the mother and son's contrast when it comes to taking a political stand.

In an all too familiar situation, Pia (Krystle Campos) is a professional journalist barred from covering events in Malacañang. Eager to expose the truth, she tags along her two friends—a doctor and a police officer—to discover facts about the death of innocent children and the ongoing threat to democracy.

Rosas follows the story of two old men (Bembol Roco and Crispin Pineda) in an elderly home. While waiting for the sun to set, they reminisce about their past and reveal their deepest secrets of longing. This one-act play is dedicated in memory of theater stalwart Soxie Topacio.

Graphic artist and writer Carlo Vergara presents a story about a young man enjoying a successful writing career. He's treated like a celebrity and put on a pedestal by his supportive lover. Things take a different turn when a childhood friend shows up, hoping to learn his ways.

Three strangers form an unlikely and short friendship while delivering their babies in a busy labor room. One of them delivers a healthy baby, but the other two have to face a painful loss right then and there.

Lola Peds and Lola Tisha, both in their 60s, fight about an upcoming kissing scene they're about to present in acting class. Tisha suspects that this is just Peds' way to get his way with her, while Peds accuses Tisha of being unprofessional. Both eventually discover the true feelings they have for each other.

Neil (Arnold Reyes) comes home after a 20-year imprisonment for rape charges. He reunites with his younger brother, Norman (Acey Aguilar), and the two are forced to face their darkest and most disturbing secrets.

Live-in partners Chona and Ramil argue about their misfortune of living under a railroad. With the passing of different trains, we're transported to different scenes on how they try to save themselves from poverty—one shows Ramil at the set of Pera o Bayong.

Playwright Tyron Casumpang brings the tragic situation in Marawi to the stage. Christian and Muslim volunteers fight a futile war against hunger in an evacuation center where children—at such young and innocent age—are forever traumatized by gunshots and air raids.

Cancer patients Abe and Mara check in at a small hotel after a chemotherapy session. In a few hours, they dip in the proverbial River Lethe—where one drinks to forget—and explore and satiate their sexual needs.

Ed and Arthur, long-time employees in a BPO company, have seen the departure of many colleagues from work. When a young teammate resigns to pursue his passion, the two contemplate about their future and everything they have sacrificed for a high-paying job.

Barangay Sincerity's only bikers' club welcomes a new member: Louella, a widow from Manila. While five of the group's members are happy about the newest addition, one of them reveals that Louella is a rumored drug user and that her husband was killed during Operation Tokhang. This causes dissent in the club—others fear for their safety while others feel compassion for the widow.

Pilipinas Kong Mahal with All the Overcoat

Ambet and Nato are behind a satirical news website that has become viral. Guilty with the fact that they're writing "fake news," Ambet wants out. Nato, on the other hand, wants to keep going especially now that business is doing good. Things take a turn for the worse when a client demands them to revise an important part of Philippine history by churning out another "fake news."

The Virgin Labfest 2018 runs from June 27 to July 15 at the Cultural Center of the Philippines, Roxas Boulevard, Pasay City. Tickets, priced from P400 to P600, are available through Ticketworld and CCP Box Office. For more information, visit the Virgin Labfest on Facebook.