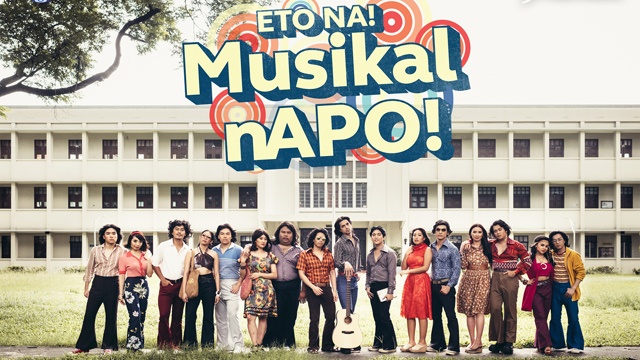 Eto Na! Musikal nAPO! Is a Major Throwback to the '70s

It was a time of lofty dreams and powerful protests.

(SPOT.ph) After a throwback to the '90s with the premiere of Ang Huling El Bimbo in July, another show will be bringing us further down memory lane. 9 Works Theatrical and Globe Live present Eto Na! Musikal nAPO, an original musical inspired by the story and songs of Filipino musical group APO Hiking Society. It is set to run from August 3 to 26 at the Maybank Performing Arts Theater at Bonifacio Global City. 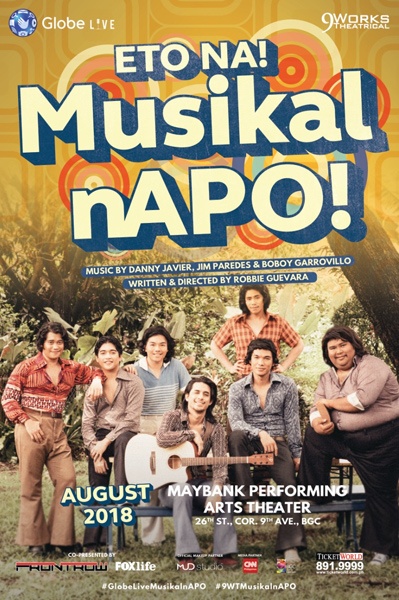 "In 2013, Boboy Garrovillo lightly suggested we make a musical using their songs. I remembered his story on how APO started and evolved when we did a play together in 2003. And I knew that’s what I wanted the musical to be about," writer-director Robbie Guevara told members of the press.

Expect an homage to one of the dreariest yet hopeful decades in our history—bell-bottomed jeans, platform Oxfords, Chuck Taylors, peace signs and doves, protest cards, and "Bayan Ko" on loop. Amid the poverty and violence during the era of Martial Law, a group of college students try to win a singing and songwriting competition. Life seems to be carefree and perfect at first, but it doesn't take long before reality hits and challenges their dedication towards their passion. Aside from telling the journey of the APO, which was founded in 1969, Eto Na! Musikal nAPO also sheds light on what most Filipinos went through 40 years ago under the Marcos regime.