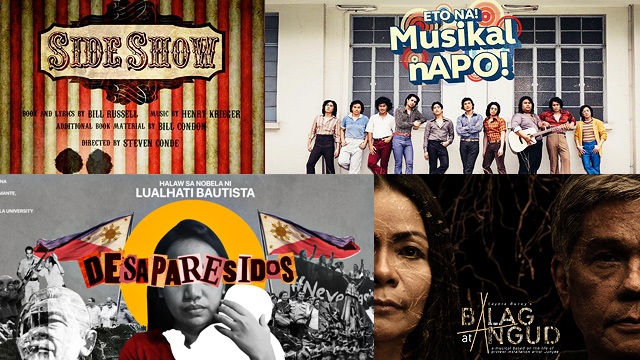 Theater in Manila: Exciting Shows to See Onstage This August

(SPOT.ph) While July walked us down memory lane with a '90s throwback and well-loved children's story, the month of August takes things further with a look back to more than four decades ago (and even seven decades ago). There's a musical set against the backdrop of Martial Law, a tragic play on abducted activists, and a narration of how art can be a form of protest. It's going to be an interesting month in theater!

Eto Na! Musikal nAPO! puts the spotlight on a bunch of seven friends—Rick (Mark Bautista), Ray (Jon Philippe Go), Butch (Jobim Javier), Sonny (Alfritz Blanche), Jaime (Jef Flores), Donnie (Job Abella), and Bobby (Vyen Villanueva). Bonded together by their love for music, they try to win a singing and songwriting competition while dealing with their problems in school, at home, their relationships, and the reality of Martial Law. This all-'70s story is told through the hit songs of legendary Filipino group, APO Hiking Society.

Monique Wilson, Missy Maramara, and Mae Paner (also known as Juana Change) star in the Filipino adaptation of Eve Ensler's The Vagina Monologues. The popular piece reveals a series of stories in which women talk about the part of the female body often considered a taboo topic.

Balag at Angud, a Filipino musical written by Layeta Bucoy, follows the life of protest-installation artist Junyee who became part of the progressive art movement in the 1970s. "Balag" was his first open-air one-man show while studying under the tutelage of Napoleon Abueva at the University of the Philippines - Diliman. "Angud," on the other hand, was on display on the front lawn of the Cultural Center of the Philippines in 2007, and became known as the Philippines' largest ever piece of installation art. Prolific playwright Rody Vera plays the titular role.

Balag at Angud runs from August 31 to September 16 at Tanghalang Aurelio Tolentino, Cultural Center of the Philippines, Roxas Boulevard, Pasay City. Tickets, priced from P800 to P1,000, are available through Ticketworld.

Gee-Gee at Waterina: Ang Musikal is an all-original show with music composed by Jesse Lucas and story and lyrics by J. Dennis C. Teodosio. It looks into the life of Gee-Gee (Norman Peñaflorida), a gay politician, and Waterina (Roeder Camanag), a "comfort gay" during the Japanese occupation, who both mull over the possible effects of showing a biopic inspired by the latter's life story to the people. Gee-Gee at Waterina was first presented at the Virgin Labfest in 2005 while its short film version was produced for Cinemalaya in 2006.

Gee-Gee at Waterina runs from August 18 to August 26 at Arts Above, 112 West Avenue, Quezon City. Tickets, priced from P1,200 to P1,500, are available through Ticketworld.

Gab Pangilinan (as Daisy Hilton) and Kayla Rivera (as Violet Hilton) take the spotlight in the local production of Broadway musical Side Show. It is based on the life of the conjoined twins who became famous stage performers in the 1930s. Wency Cornejo (as the mysterious ringmaster Sir), Markki Stroem (as the talent scout Terry Connor), and David Ezra (as Buddy) round up the cast.

Adapted from Lualhati Bautista's novel of the same title, Desaparesidos follows the lives of former Martial Law rebels Ana (Chic San Agustin-de Guzman) and Roy (Brian Sy). Through flashbacks and narrations, we learn about the abuse and torture they—and many other activist abductees (the disappeared or desaparesido)—had to bear during that dark period. This production is written and directed by Guelan Varela-Luarca.

Ian Maclennan's adaptation of The Taming of the Shrew was first shown in Tasmania, Australia in 2006. It brings the Shakespearean comedy to the modern times when young soldier recruits pull a prank on Christopher Sly, a drunkard military man. They get him to believe that he's a general and that Bartholomew, a member of the squad, is his wife. An entertaining skit ensues as Sly acts as Petruchio who is trying to court the shrewd Katherina (played by Bartholomew). It's a play within a play that's out to make everyone LOL. Tanghalang Ateneo is behind this production.

Musical Theater Play Metro Manila
Your Guide to Thriving in This Strange New World
Staying
In? What to watch, what to eat, and where to shop from home
OR
Heading
Out? What you need to know to stay safe when heading out