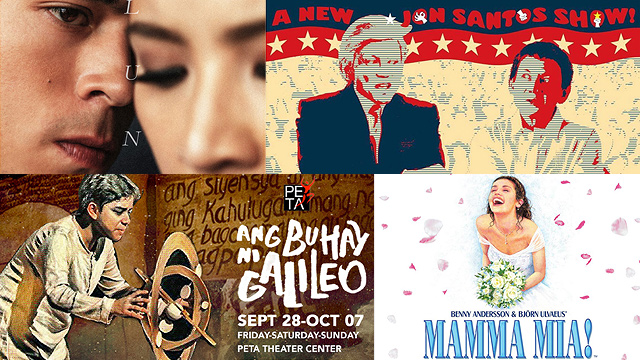 Theater in Manila: Exciting Shows to See Onstage This September

(SPOT.ph) September is a busy month for theater-goers with 12 plays and musicals simultaneously being staged in different parts of the Metro. This month's set takes a look at issues surrounding identity, faith and religion, and politics. Get ready for some really good shows!

What happens if your perfect woman turned out to be a man? M. Butterfly, a Tony Award-winning musical by David Henry Hwang, follows the story of French diplomat René Gallimard (Olivier Borten) who falls in love with Chinese opera star Song Liling (RS Francisco). Things get more complicated when the French man's wife finds out about her husband's affair, and even more so when he realizes the truth 20 years later—that Liling is actually a man.

In the ending of Henrik Ibsen's A Doll's House (1879), a stronger and bolder Nora leaves his husband and slams the door behind her—an unthinkable scenario in 1870s Norway. In A Doll's House, Part 2 (2017), playwright Lucas Hnath flash forwards to 15 years later when the protagonist (Menchu Lauchengco-Yulo) already made a name for herself as a feminist writer. How will she confront her soon-to-be ex-husband about their divorce?

Guadalupe: The Musical retells the story of how the Virgin of Guadalupe appeared to a simple Mexican farmer, Juan Diego (Cocoy Laurel). Things take a different turn when supernatural events, such as the healing of the sick and the appearance of an image of the Virgin on a tilma or apron, start to happen.

Guadalupe: The Musical runs from September 28 to October 14 at the Meralco Theater, Ortigas Center, Pasig City. Tickets, priced from P1,000 to P3,000, are available through Ticketworld.

If the planet were slowly dying, would you still want to bring a child into the world? Lungs, a play by Duncan Macmillan, lets us look into how a 30-something couple talks about this life-changing decision. It stars Sab Jose, who just came from the hit musical Eto Na! Musikal nAPO! and Jake Cuenca in his much-awaited theatrical debut.

Mamma Mia!, which is one of the longest-running show in West End history, follows the story of 20-year-old Sophie who longs for a father who would walk her down the aisle on her wedding day. She later finds out about the three men that her mom was intimate with—one of whom could possibly be her dad.

Mamma Mia! opens on September 29 at The Theater at Solaire, Solaire Resort and Casino, 1 Aseana Avenue, Parañaque City. Tickets, priced from P1,550 to P7,000, are available through Ticketworld.

For this year's Repertory’s Theater for Young Audiences, the theater company presents the classic story of Rapunzel and her long hair. Rapunzel! A Very Hairy Fairy Tale is written by Janet Yates Vogt and Mark Friedman and is directed by Joy Virata.

Trumperte is on September 22, 8 p.m. at Teatrino, Greenhills, San Juan City. Tickets, priced from P1,500 to P2,500, are available through Ticketworld.

Cinderella is from September 29 to 30 at Tanghalang Nicanor Abelardo, Cultural Center of the Philippines, Roxas Boulevard, Pasay City. Tickets, priced from P100 to P2,000, are available through Ticketworld.

Ang Paglilitis kay Mang Serapio, which was written by Paul Dumol in 1968, is now more relevant than ever as the Philippine justice system is in turmoil. The 50-year-old play centers on an old beggar named Mang Serapio who is accused of harboring a child and allegedly affecting the community's shared income. As the arguments in the courtroom continue, the corruption within the judicial system is exposed.

Six Characters in Search of an Author

Playwright Rody Vera translates the Italian classic Six Characters in Search of an Author by Luigi Pirandello for the enjoyment of the Filipino audience. It's an absurdist play within a play that explores the relationships of playwrights, actors, director, and even the piece itself.

Six Characters in Search of an Author runs until September 30 at Wilfrido Ma. Guerrero Theater, 2/F Palma Hall, University of the Philippines - Diliman, Quezon City. Tickets, priced at P500, are available through Ticket2Me.

The Filipino translation of Bertolt Brecht's Ang Buhay ni Galileo was first staged in 2017 by the Philippine Educational Theater Association at the Rajah Sulayman Theater in Fort Santiago as part of the theater company's 50th anniversary. It follows the story of Galileo Galilei, who was thought to be a heretic by the Roman Catholic Church because of his discoveries about the universe.

Theater In Manila Musical Theater Play Performing Arts
Your Guide to Thriving in This Strange New World
Staying
In? What to watch, what to eat, and where to shop from home
OR
Heading
Out? What you need to know to stay safe when heading out