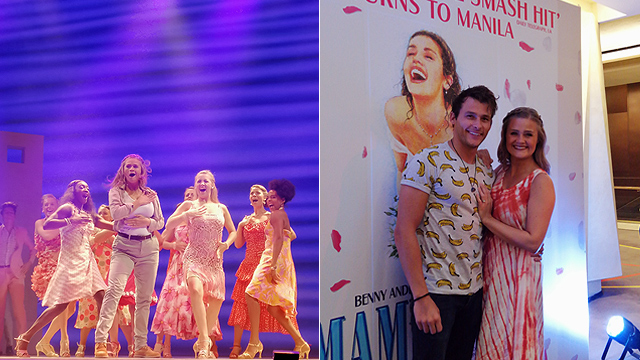 This Mamma Mia! Couple Fell in Love Behind the Curtains

(SPOT.ph) Mamma Mia!, a jukebox musical based on the songs of ABBA—"Dancing Queen" included—first wowed theater fans when it premiered in West End in 1999. It's a feel-good musical that ends in a beautiful wedding. With such a positive vibe onstage, it doesn't come as a surprise that Mamma Mia! stars Lucy May Barker (as Sophie Sheridan) and Phillip Ryan (as Sky) of the International Tour found love behind the curtains. And they're now both in Manila for the Philippine leg of Mamma Mia!, which runs until October 21 at The Theatre at Solaire in Parañaque City.

In a press conference on October 2, the real-life couple revealed that they got engaged in July 2018 and hope to tie the knot by 2020. "When you first start a job, certainly when you're playing a big role, your social life just goes out the window. Everything is about the job," Barker shares, recalling the February 2017 United Kingdom leg of the tour. It wasn't until "things calmed down a little bit" and the whole cast went out to eat at a Chinese restaurant near the theater that she started paying attention to Ryan. "He was wearing this black V-neck top and I was like, ‘Yeah, maybe he is quite cute.’ We started hanging out, then we went on a date. Then now we're finishing each other's sentences," she adds.

Towards the end of the musical, characters Sophie Sheridan and Sky leave the fictional island of Kalokairi in Greece with their backpacks in tow to start a new life together. That scene couldn't be more apt for the two. "That was really special because in real life..." Barker trails off. "...we travel, see the world," Ryan finishes.

Mamma Mia! runs until October 21 at The Theatre at Solaire, Solaire Resort and Casino, 1 Aseana Avenue, Parañaque City. Tickets, priced from P1,550 to P7,000, are available through Ticketworld.