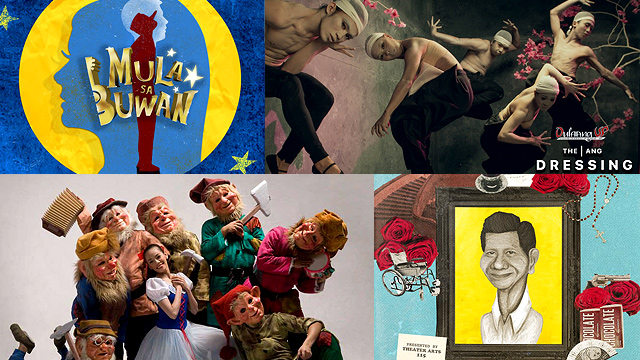 Theater in Manila: Exciting Shows to See Onstage This November

End the year with a bang!

(SPOT.ph) The year may be coming to a close, but theater groups and dance companies in the Metro are nowhere near done presenting must-watch musicals, plays, and ballet shows for 2018. The repertoire for November ranges from well-loved Christmas shows like The Nutcracker to an opera thriller with a surprising twist. Get ready for some really good shows.

Gian Carlo Menotti's opera thriller titled The Medium follows the story of Madame Flora (a.k.a. Baba), who facilitates fake séances. During one of her sessions, she thinks she has actually summoned spirits—only to learn the truth in the most painful way. Jay Glorioso headlines MusicArtes' production.

The Dressing Room: That Which Flows Away Ultimately Becomes Nostalgia, a play by Japanese writer Shimizu Kunio, graces the Philippine stage as part of Dulaang Unibersidad ng Pilipinas 40th theater season. The company is also staging a Filipino translation by Palanca Hall of Famer Nicholas Pichay on select dates. A meta-play, The Dressing Room explores the frustrations and aspirations of four actresses preparing for their cues while waiting backstage.

Waitress, which makes its international premiere in Manila, features music and lyrics from Sara Bareilles and script by Jessie Nelson. It tells the story of a pie maker named Jenna who dreams of changing her life for the better. Joanna Ampil, Bituin Escalante, and Maronne Cruz star in this Atlantis Theatrical production.

Mula sa Buwan takes after the well-loved play by Cyrano de Bergerac but with a very Filipino twist. The Edmond Rostand original is now set in 1940s Manila where Cyrano (Nicco Manalo/Boo Gabunada) is an ROTC cadet and Roxane (Cris Go/Gab Pangilinan) is a blushing colegiala. Christian (Edward Benosa/Myke Salomon), the lead's best friend, falls in love with the beautiful damsel.

Tagu-taguan Nasaan ang Buwan follows Popoy, a young boy who—like most kids his age—loves playing video games and has difficulty speaking in Filipino. Much to his dismay, his father Jeffrey sends him to stay with his grandmother Luna, who turns out to be part of a magical world of stories called Dilim-Dilim Land. It is now up to Popoy to save this enchanted kingdom.

The show runs until November 29 at the PETA Theater Center, Sunnyside Drive, New Manila, Quezon City. Tickets, priced from P400 to P500, are available through Ticket2Me.

Marisol, a two-act play by Puerto Rican writer Jose Rivera, is adapted into Filipino by Palanca Hall of Famer Rody Vera for Tanghalang Ateneo's 40th season. A mix of magic realism and dark comedy, it follows Marisol's story of survival amid turmoil in the cosmos—the angels have decided to wage war against a senile and pseudo-dictator God. Sound familiar?

Philippine Ballet Theater presents a full-length classic just in time for the holiday season—The Nutcracker. The two-act ballet is adapted from E. T. A. Hoffmann's story The Nutcracker and the Mouse King and Alexandre Dumas' adapted story The Story of a Nutcracker. Bring the kids to this family-friendly and magical show featuring festive colors, life-sized dancing dolls, and an enchanting set.

The show runs from November 17 to 18 at Tanghalang Nicanor Abelardo, Cultural Center of the Philippines, Roxas Boulevard, Pasay City. Tickets, priced from P100 to P2,000, are available through Ticketworld.

Larawan ng Pilipino Bilang Artist(a), written and directed by Nonon Padilla, is a comedic sequel to the Nick Joaquin classic, A Portrait of the Artist as Filipino. It reimagines what could have happened had the Marasigan sisters, Paula and Candida, come back to the Philippines—not to Intramuros, but to Forbes Park—after living for 30 years in New York.

Ang Paglilitis kay Mang Serapio, which was written by Paul Dumol in 1968, is now more relevant than ever as the Philippine justice system is in turmoil. The 50-year-old play centers on an old beggar named Mang Serapio who is accused of harboring a child and allegedly affecting the community's shared income. As the arguments in the courtroom continue, the corruption within the judicial system is exposed.

The show runs from November 23 to 25 at The Ruins, Alfonso Street, Poblacion, Makati. Tickets, priced at P800, are available through Ticket2Me.

The show runs from November 24 and December 1 at 6 p.m., and on November 25 and December 2 at 4 p.m. at ALIW Theater, Cultural Center of the Philippines Complex, Vicente Sotto Street, Pasay City. Tickets, priced from P500 to P1,500, are available through Ticketworld.

Tanghalang Pilipino and The Japan Foundation, Manila partners up for the Filipino adaptation of Oriza Hirata's acclaimed play Tokyo Notes. The local version written by Rody Vera is set in the lobby of an art museum in Manila—sometime in the future—while a war is ongoing in Europe. With the West in the middle of such a calamity, a number of paintings are moved to various cities in Asia—available for viewing by Filipino families in local galleries.

The show runs from November 30 to December 16 at Tanghalang Aurelio Tolentino, Cultural Center of the Philippines, Roxas Boulevard, Pasay City. Tickets, priced from P800 to P1,000, are available through Ticketworld.

For this month's performance by Ballet Philippines, kids and kids-at-heart can relive the well-loved story of Snow White and her Seven Dwarfs through a graceful ballet rendition. The family-friendly show is choreographed by Effie Nañas.

The show runs from November 30 to December 9 at Tanghalang Nicanor Abelardo, Cultural Center of the Philippines, Roxas Boulevard, Pasay City. Tickets, priced from P300 to P2,500, are available through Ticketworld.