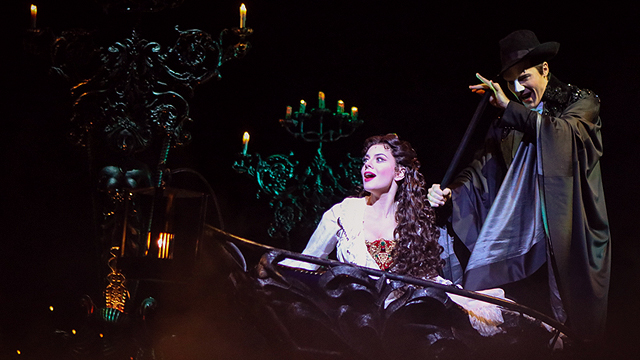 PHOTOS: The Phantom of the Opera Is a Feast for the Senses

Catch it at The Theatre at Solaire until March 31.

(SPOT.ph) A week after its premiere in Manila, The Phantom of the Opera's international tour continues to wow the Filipino audience not only with its timeless tales but also with its stunning spectacle. The world-renowned musical runs until March 31 at The Theatre at Solaire in Parañaque City, and we caught a few excerpts before the much-awaited Gala Night on February 28. Here are a few snapshots—if these don't convince you to get your ticket ASAP, we don't know what else will.

The Phantom of the Opera, which was first performed in London's West End in 1986, is set in the enchanting Paris Opera House in 1881. It follows the story of the ghostly Phantom (Jonathan Roxmouth) who falls in love with the voice of up-and-coming opera singer Christine Daaé (Meghan Picerno), and decides to bring her to the underground lake beneath the Opera House. A love triangle ensues because Raoul (Matt Leisy), Christine’s childhood friend, is also in love with the singer.

“It speaks to a lot of people. There are a lot of different themes in the show. For me, I think, the one I bring to the table, is the romance—the love aspect. People get swept away with these gorgeous melodies, and it's a very romantic show. I think, people relate to the Phantom as well because he's a tortured soul, not quite understood, the one who doesn't get the girl, and the one who's lonely. I think people relate to that,” Leisy told the press in a roundtable interview.

But more than anything, the cast revealed that the audience can look forward to the visual feast, made possible by the original production design of Maria Bjornson and lighting design by Andrew Bridge, complemented by the aural masterpiece of Andrew Lloyd Webber’s music and Charles Hart’s lyrics.

The Phantom of the Opera runs until March 31 at The Theatre at Solaire, Solaire Resort and Casino, 1 Aseana Avenue, Parañaque City. Tickets, priced from P1,900 to P7,250, are available through Ticketworld.

The Phantom Of The Opera The Theatre At Solaire Theater Musical
Explore Spot.ph