Stop Kiss by Diana Son Returns to the Stage on July 12
Loading
Already a member? Log in
No account yet? Create Account
Spot.ph is your one-stop urban lifestyle guide to the best of Manila. 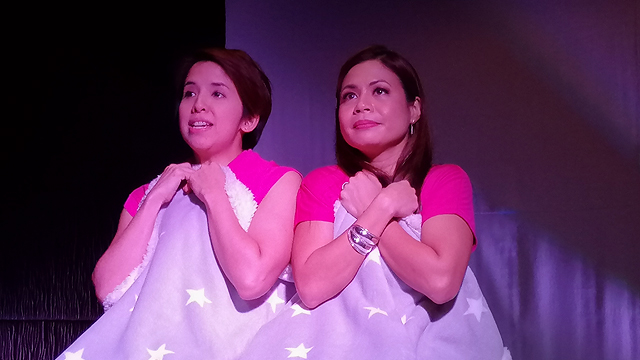 Stop Kiss Hopes to Stop the Hate Against LGBTQ+

It opens on July 12 at Power Mac Center Spotlight in Makati City.

(SPOT.ph) When two women kiss in public, any of these things could possibly occur: Misogynistic men resort to wolf-whistling, conservatives give the dagger eyes (with a matching sign of the cross), or—well, if you’re lucky—nothing really happens. It’s worse for New Yorkers Callie and Sara who, after sharing a kiss for the first time, are attacked by an angry bystander; and one of them eventually falls into a coma. This scenario might be too real—almost reminiscent of a recent homophobic attack against two women in a London bus, but this is actually the plot of Diana Son's 1998 play titled Stop Kiss. It's set to return to the Philippine stage with eight shows from July 12 to 14 and from July 19 to 21 at Power Mac Center Spotlight in Makati City.

"Stop Kiss changed my life so much that I started changing toilet rolls," Missy Maramara said about the piece during a press conference on June 17 at Pineapple Lab in Makati City. She was talking about a beat where the characters were arguing on which side the edge of a toilet roll should be. Along with Jenny Jamora, she starred in the play’s first run in Manila in 2003, which was then under the direction of Monique Wilson under New Voice Company.

"Everything I learned, I learned from Monique [Wilson] and her partner Rossana Abueva, and that atmosphere of love. In the early aughts, [New Voice Company] was one of the few companies doing straight plays, [which are] very women-centric and feminist. They were very clear with their agenda, very closely tied up also with Gabriella, with Eve Ensler and the V-Day movement. So that was very clear to me, that this was an empowering piece for women, and especially for women who happen to fall in love with other women in terms of their romantic lives," Jamora recalled about doing the production 16 years ago. Both actresses were in their early 20s back then, and they regard Stop Kiss as their big break.

Almost two decades later, a male director—Ed Lacson, Jr.—now takes the helm of the production. Though hesitant at first, the award-winning director-cum-set-designer said yes after reading the script. Maramara shared what Lacson told her: "You know, this story speaks to me, it's very powerful. It's very meaningful. It just so happens that they're women, but I think, in general, violence needs to be addressed—and that violence stops love." This stuck with the actress, and they knew immediately that he’s the right man for the job.

And it’s not just the director that has changed. Maramara, who previously played the role of public school teacher Sara, is switching places with Jamora, who used to portray Callie, a New York traffic reporter.

When asked what else is different, Jamora said it best: "I think things are a little bit the same. It's been 16 years, but we're still fighting the same battles." Unfortunately, it’s true; and while we continue to protest against prejudice and bigotry, putting stories of the marginalized under the spotlight is already a big step forward.