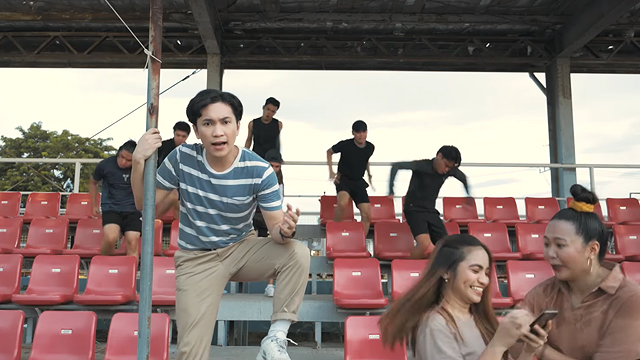 UPDATED: People Are Calling Out This Medley for Being an Ang Huling El Bimbo Musical Rip-Off

The grand winner of an online talent show draws flak for alleged plagiarism.

(SPOT.ph) Ang Huling El Bimbo, a musical told through songs by '90s rock band Eraserheads, first caught our attention when it premiered in July 2018 at Resorts World Manila. The show, which was written by Dingdong Novenario and directed by Dexter Santos, enjoyed two sold-out reruns and even special productions with the band's frontman, Ely Buendia, in 2019. Amid the pandemic, it was streamed online in May and hit two million views in two days.

On July 27, online talent show The Pop Stage released CJ Villavicencio's Eraserheads medley for the contest—and theater artists were quick to point out the familiarity of the beat and tempo to the musical arrangement of the songs in Ang Huling El Bimbo (AHEB). Villavicencio, who was hailed the grand winner of the competition on August 2, allegedly used the musical arrangement from the play without permission.

Villavicencio shared the now-deleted music video on his page on July 27, 11:01 p.m. and dedicated his creation to all students. "Sana madama at marinig n'yo ang pangarap ko. Ito ay para sa lahat ng estudyante, naging estudyante at hindi nabigyan ng pagkakataon maging estudyante," the grand winner said. He also revealed that he was "happy to conceptualize, write, and co-direct this performance" alongside videographer Ian Castor, choreographer Rommel Quizon, and music producers Ken Umahon and Cedric Calingasan. The post also said: "Thank you, Ang Huling El Bimbo: The Musical for inspiring me to do this piece," but this bit wasn't added until July 31 at 6:33 p.m.

Myke Salomon, musical arranger for the musical, took to Twitter to express his thoughts on the issue: "A guy copied/ripped-off our musical arrangements for #AngHulingElbimboMusical (musical treatment, concept) without permission, won in that pop stage contest for his final round. He won one million and an artist contract. I feel bad for the other contestants."

Another thespian, Jef Flores, also released a side-by-side comparison of "Pare Ko" from AHEB and from Villavicencio's performance on August 3. He pointed out similarities in backup vocals, the distinct "ahoo" shout, the guitar riff (which is very different from the original "Pare Ko"), and the lead-up to the ending. "This is the rudest part here—that walk-up, that was very original but Myke [Salomon] did it and they took it from him," Flores said. He also added that Villavicencio's song used the drum beat from Michael Jackson's "They Don't Care About Us."

Flores also pointed out that the attribution to AHEB on Villavicencio's post wasn't added until someone called him out on Facebook. He was referring to Jun Bartolome's comment on The Pop Stage's post: "This is a total rip-off of Ang Huling El Bimbo - The Musical, from the musical arrangement to the choreography. This is not an original work."

Ely Buendia, former vocalist of Eraserheards, aired out his opinion on Facebook. In a post on August 3, 4:16 p.m., he said: "AHEB’S ROTC "Pare Ko" was by far, among all the brilliant arrangements and choreography in the show, the most striking and original renditions I had witnessed and enjoyed during its original run, and easily became my favorite. It took something old and was INSPIRED to make it NEW and FRESH. Therein lies the difference." He expressed his disappointment for the AHEB crew and hoped that "this matter is resolved soon and credit is given to those who deserve it."

As winner of The Pop Stage, Villavicencio bested 11 other finalists and received P1 million pesos as cash prize and a one-year contract with Viva Artists Agency. Video submissions were collected in May, which were pared down through four elimination rounds, a semi-final round, and a final round that was broadcasted on Facebook on August 2, 7:15 p.m. Criteria for judging were: creativity/originality (40%), quality of performance (40%), and entertainment value (20%). The panel of judges were Jed Madela, Ritz Charles Beltran, and Lani Misalucha. It was hosted and produced by Matteo Guidicelli and sponsored by Popeyes.

Under the Intellectual Property Code of the Philippines, artistic works—including "Musical compositions, with or without words" are original works "protected from the moment of their creation." For these pieces, "copyright shall belong to the author of the work." In a 2019 article on the Intellectural Property of the Philippines' website, Filipino Society of Composers, Authors, and Publishers General Manager Atty. Mark Thursday Alciso explains the intricacies of performing and playing songs in public legally. "If we are to be strict about it, song covers uploaded on the Internet is illegal. Copyrighted music cannot be played or performed to the public without permission. They're not supposed to, without a license."

SPOT.ph reached out to Villavicencio on August 3, 12:56 p.m. through Facebook for a statement. The message was seen, but no response was received as of writing.

UPDATE (August 5, 12 p.m.): Villavicencio on August 4, 10:51 p.m. released a statement online. "Over the weekend, my life has changed in an instant. I did not expect my victory to trigger so much negative comments and hate online. I was hurt and it also aches my heart to unintentionally hurt some people as well, especially the production team of Ang Huling El Bimbo The Musical," the post started. He explained that the performance was meant to be a tribute to his favorite artists and musical "while also incorporating [his] own story and experiences," and that "there was no intention whatsover on [his] part to plagiarize." Villavicencio also said that the sitution "affected [his] mental health."

Villavicencio's music video on The Pop Stage's Facebook page has also been deleted as of update.

Ang Huling El Bimbo Original Pilipino Music Opm Theater Resorts World Manila Full House Theater Adventurer Savvy Seasoned Musical
Your Guide to Thriving in This Strange New World
Staying
In? What to watch, what to eat, and where to shop from home
OR
Heading
Out? What you need to know to stay safe when heading out