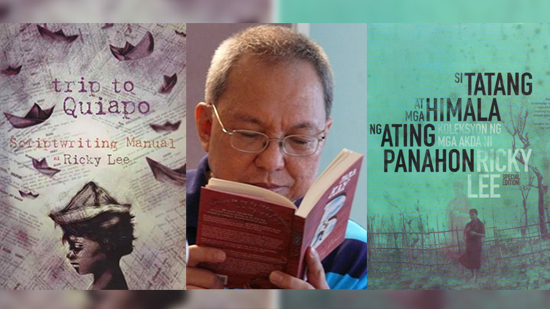 (SPOT.ph) "Walang himala! Ang himala ay nasa puso ng tao, nasa puso nating lahat!," from the 1982 movie Himala, are powerful lines that have been lauded by generations of Filipinos and even by critics outside the Philippines. Behind the words of this landmark film directed by National Artist Ishmael Bernal and starred by Nora Aunor is award-winning writer Ricardo "Ricky" Lee.

Lee has written more than 160 scripts since he started in 1973. He wrote the screenplays of Karnal (1983), The Flor Contemplacion Story (1995), Bulaklak ng Maynila (1999), Anak (2000), Mila (2001), and a lot more. Apart from being a screenwriter, Lee is a fictionist, playwright, and essayist. Among the books he has published are the scriptwriting manual Trip to Quiapo, the anthology Si Tatang at Mga Himala ng Ating Panahon, the playbook Pitik-Bulag Sa Buwan Ng Pebrero, screenplay books like Brutal/Salome (the first of its kind in the Philippines), and the novels Para Kay B (O Kung Paano Dinevastate ng Pag-ibig ang 4 out of 5 sa Atin) and Si Amapola sa 65 na Kabanata. He also handled television dramas such as Mangarap Ka, Maging Sino Ka Man, and Magkaribal as a Creative Manager for ABS-CBN.

This 2016, after 14 years of hiatus, he will resume conducting his free workshop to selected individuals who want to learn how to write scripts for film and those who want to improve on their writing. Sessions will be held every Sunday starting September or November. Lee has been holding free scriptwriting workshops since 1982, producing hundreds of graduates who are now part of the movie and TV industry.

The workshop is open to everyone. The selection process is tentatively scheduled on September 4 at the new UPFI Film Studio at the University of the Philippines, Diliman. Those interested to join may fill up the form or email rickyleebatch15@gmail.com. For more information, visit Ricky Lee's Facebook page.

Ricky Lee Himala Workshop
Your Guide to Thriving in This Strange New World
Staying
In? What to watch, what to eat, and where to shop from home
OR
Heading
Out? What you need to know to stay safe when heading out