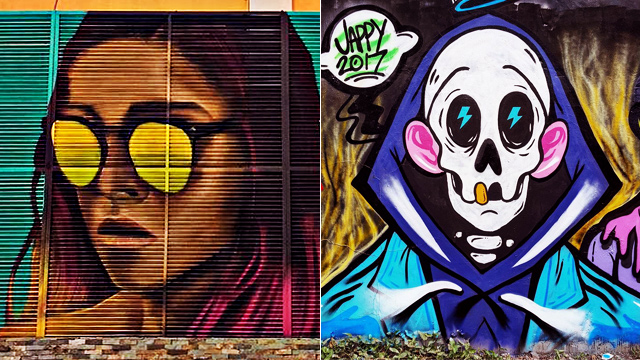 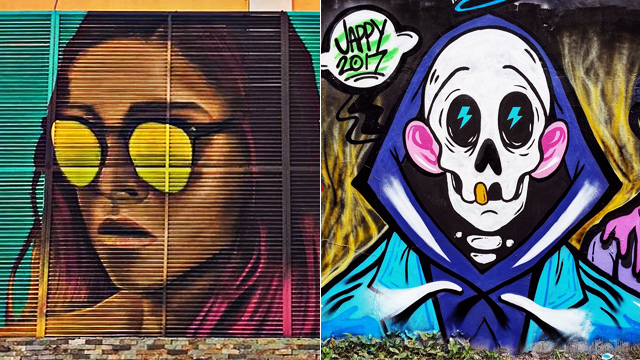 (SPOT.ph) Unlike traditional artworks on canvasses placed in air-conditioned galleries, street art—from graffiti to murals—is, well, found on the streets. You can see it on gutters, lampposts, demolished walls, parking lots, pavements, and basically anywhere. The pieces are often done late at night, when the police or guards aren't around to reprimand the artist for spray-painting on the walls that say “post no bill.” But street art still bears the stigma of being equated with vandalism, which is done with the intention to destruct or damage property. How can something so amazing, like the murals below, be called damaging, right?

True enough, our local street artists prove that art goes beyond art fairs and exhibits, and even building owners, restaurateurs, and cultural agencies have commissioned them to design otherwise bare walls. We round more street art pieces that you should be on the lookout for while driving around the Metro aside from the ones we found in 2015. Happy spotting!

Welcoming you to BGC Arts Center, the newest playground for Filipino artists and lovers of the arts, is a commissioned mural made by Distort Monsters. The profile on Distort Monsters' Instagram page reads "Making friends with the monsters in my head since 2009." "Garden Grove," however, is a bit different than the usual images of skulls and out-of-this-world creatures, and shows colorful illustrations of succulents, cactus, and other plants.

Street artist Jappy Agoncillo made his mark, literally, somewhere in Marikina through a mural of a funny-looking skull...with ears! You can see it side by side with the trademark spray-painted artworks of Distort Monsters and JP Pining.

Kookoo Ramos has invaded Eastwood City with her portrait murals spray-painted on vents and building gates. You can even find her trademark graffiti on kubos and walls in Siargao where she recently spent a fun surfing vacation. The walls of restaurants Wagga Wagga in Ortigas and Crave Park in Marikina also bear her artworks.

The National Commission on Culture and the Arts collaborated with street artists like Lee Salvador of Cavity Collective to paint murals on the walls of the Pasay City Public Cemetery and Crematorium along Sgt. Mariano Street. His signature painting of hollow faces now stands on the nine-foot high panel, but with more vibrant colors and cutesy images like hearts and paper airplanes.

Kris Abrigo is one of the many artists that turned BGC's otherwise plain firewalls, gutters, and parking lots into huge canvasses painted with murals and graffiti during the ArtBGC Mural Festival 2016. "Manpower" on the firewall of a 17-storey commercial structure along 3rd Avenue is his tribute to the labor force of the Philippines.

You may have seen Old Haus' stickers posted all over the city—from an image of an orange peeing dog on the gutter of Robinsons Magnolia to a stenciled spray paint of the word "Why" under the MRT overpass in Shaw Station. The works are very temporary, just the way street art often is.

Aside from murals on the walls, Bonifacio High Street also sports a huge heart sculpture painted by artist Dee Jae Pa'este. It depicts an image of two women with their backs against each other, held together by what seems to be a tree rooted on the musical symbol of a G-clef.

Nemo Aguila can turn anything into an art piece, may it be the board of a basketball ring or a wooden figure of a pigeon for Art in the Park 2017. One of his signature images is that of a three-eyed green blob.

Ang Gerilya, an artist's collective formed in 2008, is known for creating artwork inspired by Philippine culture and history, and the five-storey mural "Ang Pinuno" is no different. It features an image of a datu, a leader of an organized, pre-Hispanic Philippine society; a Babaylan spirit-bird; and the words "Sino ang may galing, sipag, tapang, at puso? Siya ang dapat mamuno!" This political piece can be found on the firewall of an apartment building on the corner of San Andres Street and Osmeña Highway, right next to the tracks of the Philippine National Railways, in Manila.

Distort Monsters Jappy Agoncillo CHILL Kookoo Ramos Lee Salvador Kris Abrigo Old Haus Dee Jae Pa'este Nemo Aguila Ang Gerilya Street Art Metro Manila Art
Your Guide to Thriving in This Strange New World
Staying
In? What to watch, what to eat, and where to shop from home
OR
Heading
Out? What you need to know to stay safe when heading out