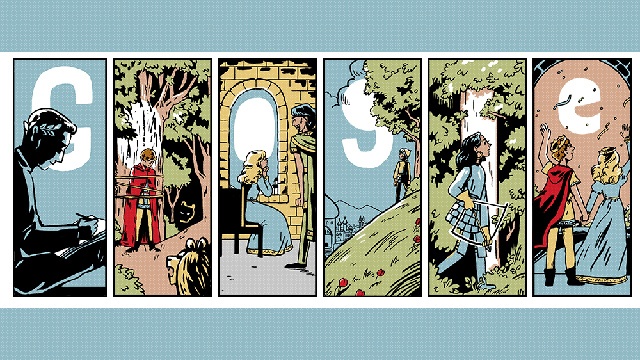 We give you three guesses on what it's about.

(SPOT.ph) If you attended school in the Philippines, you probably (and hopefully) read Francisco "Balagtas" Baltazar's Florante at Laura in second year high school (or is it Grade 8 now?). A story of love between Duke Florante and Princess Laura of Albania, it is written as a monorhyme with four lines per stanza, 12 syllables per line, and a slight pause (called caesura) on the sixth syllable—a Filipino poetic format called awit. This masterpiece is depicted as a six-panel caricature in today's Google Doodle to celebrate the renowned Tagalog poet's 230th birth anniversary.

The first panel shows Balagtas himself, with laurel leaves and all, hard at work while writing Florante at Laura. The second panel portrays the first sequence where Florante is tied to a tree and delivers the famous opening lines: "Sa loob at labas ng bayan kong sawi / Kaliluha’y siyang nangyayaring hari / Kagalinga’t bait ay nalulugami, / Ininis sa hukay ng dusa’t pighati." The next panels unfold the rest of the story—Princess Laura is held captive by Count Adolfo, Prince Aladin of Persia is exiled from his own country, Flerida (Aladin's fiancée) frees Laura, and Florante and Laura reunites and assumes their thrones as king and queen of Albania.

Francisco Baltazar National Literature Month Balagtas Florante At Laura
Your Guide to Thriving in This Strange New World
Staying
In? What to watch, what to eat, and where to shop from home
OR
Heading
Out? What you need to know to stay safe when heading out