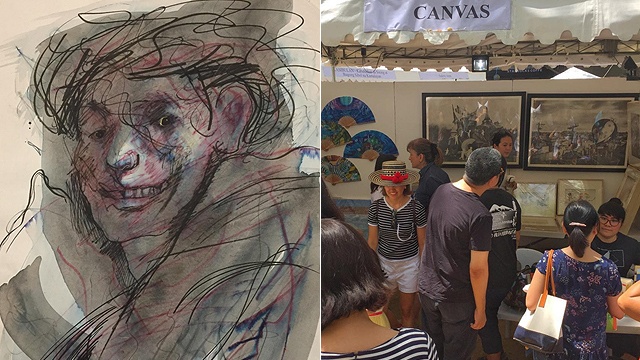 Buying Art Shouldn't Be Based on Who Made It, And Here's Why

Art in the Park proves that it's affordable as ever.

(SPOT.ph) The annual Art in the Park in Makati City is known as Manila's affordable art fair and Art Fair Philippines' low-cost and laid-back counterpart. Artworks for sale have a prescribed cap of P50,000—a big leap compared to the P20-million price tag at The Link. This year's edition, held on April 15, was made even more exciting with The Center for Art, New Ventures & Sustainable Development's gimmick of selling Benedicto Cabrera and Emmanuel Garibay pieces—disguised as unsigned artworks made by student artists—at the lowest price possible.

Gigo Alampay, founder and executive director of The Center for Art, New Ventures & Sustainable Development (CANVAS), shared his "Art in the Park Treasure Hunt" stories through Instagram. A buyer approached the CANVAS booth and pointed at one of the artworks—"Kuya, kanino to? Ang cute." "Di ko alam eh. Estudyante ata. Dinala lang dito. Di iniwan pangalan," Alampay responded. Right then and there, the artwork was bought; and it was only later (via text message) that the lucky guy was told that the artist of the piece that he bought was by Manny Garibay.

In a similar story, an Art in the Park attendee is now a proud owner of a BenCab piece bought at an affordable price. "Basta sobrang mura," Alampay said on Instragam. They would tell people that they didn't know who the artist was and reason out that it's just a consignment. "One person liked it enough to buy it even if he didn’t know who did the piece. Just before leaving he said, with a smile, that he hoped our mystery artist would grow up to be someone important," the CANVAS founder narrated.

In a book by Jeanette Winterson titled Art Objects: Essays on Ecstasy and Effrontery, she argued that “if as a society we took art seriously, not as mere decoration as entertainment, but as a living spirit, we should very soon learn what is art and what is not art.” CANVAS’ social experiment just goes to show that liking an artwork shouldn’t be based on who made it or even its price; but rather on the simple (yet powerful) questions: “Do I like this? Is it art?”

The Center for Art, New Ventures & Sustainable Development is a non-profit organization that works with the creative community to promote children's literacy, explore national identity, and deepen public appreciation for Philippine art, culture, and the environment. For more information, visit CANVAS' website.