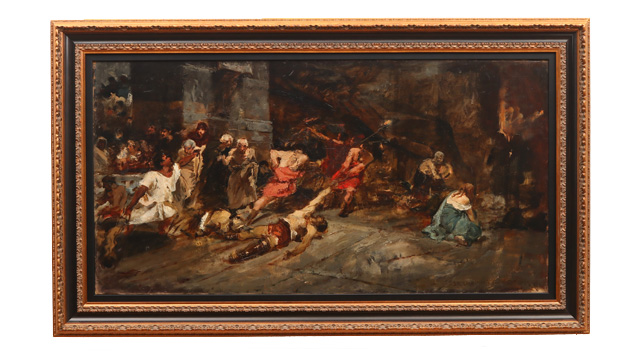 A miniature version of "Spoliarium" is to be auctioned off at Salcedo Auctions, but is it the real deal?

(SPOT.ph) Every child born on this archipelago would have taken a photo, or rather even taken a selfie with the grandiose masterpiece of the National Museum, the “Spoliarium” by the preeminent Philippine painter Juan Luna y Novicio. It is quite fascinating that we pay great reverence to the violence and despair of the dead Roman gladiators being dragged into the abyss; and that the scene it depicts is something we're reminded of on a daily basis, in today’s ongoing government campaign against illegal drugs. The spoliarium is the area within the Roman amphitheater where fallen gladiators are stripped of their weapons, clothes, and other armor before their decomposing bodies are carted off for burial in an unmarked grave or worse, thrown into the Tiber River.

The 1884 masterpiece won international acclaim at the 1884 Madrid Exposition of Fine Arts and earned one of three gold medals, with Luna's compatriot Félix Resurreccion Hidalgo being awarded a silver medal for his work “Las Virgenes Cristianias Expuestas al Populacho” (Christian Virgins Exposed to the Populace). Both masterpieces have since been repatriated back to the Philippines and are now exhibited in public collections both in the National Museum of the Philippines and the Bangko Sentral ng Pilipinas.

Unbeknownst to the public, these artists made studies or drafts of their works before executing their obra maestras. In art terminology, these are called bocetos that are preliminary works done in order to configure and determine the final layout of the figures, or see which color palette can suit the artist’s vision on the canvas. So when news broke out of a boceto of the "Spoliarium" done by Luna being auctioned off, the art world went into a frenzy, wondering whether it's a spectacular rediscovery of a masterpiece after nearly 125 years, or the greatest con the Philippine art world has ever seen.

In a standing-room only press conference at the Peninsula Manila on August 30, Salcedo Auctions Director Ramon "Richie" Lerma dropped a bombshell in presenting this work as the "original" that served as the mock-up for the grand masterpiece of 1884. Present literature tells us that Luna was known to have painted three versions of the work: the most recognized one that hangs in the halls of the National Museum dated in 1884; one held in a private collection in Manila and the other commissioned for a Russian nobleman whose whereabouts are unknown to this day; thus making this version the earliest and the fourth known so far.

This boceto is dated 1883, ascribed on the canvas itself with the words, “SPOLIARIUM - boceto LVNA, R[OMA], 1883,” making this version the earliest. In his catalogue notes, Lerma points out a peculiar signature done by Luna in baybayin script located on the lower right side of the canvas. The script for the word BU LA[N], was deduced from the Ilocano word for “moon,” which the artist added only to about four of his known works.

Its provenance was traced to that of the Xose [José] Vasquez Castiñera, who served as the mayor of the northern Spanish town of Sarria, by the Portuguese border. Its present owners were bequeathed the painting along with another work done by Luna’s contemporary Hidalgo, known as "La Pintura," done by the artist in his Paris period. It was later deduced that Castiñera plausibly received the painting as a gift or purchased the painting from a certain Don Matias Lopez, a well-endowed industrialist who made his good fortune in making chocolate.

Lopez served as the commissioner for the Spanish Pavilion at the 1889 Universal Exposition in Paris, in which both Luna and Hidalgo were part of the same delegation and also exhibited their works. Lopez could have obtained the boceto and the Hidalgo painting from the artists themselves: either through a direct purchase of their works from the artists, or as a gift from the said artists as a noble gesture. Adding credence is the fact the said boceto was subsequently exhibited in 1893, at the Museo Arquelogico Nacional in Madrid, thus being listed in an entry of its catalogue of Philippine historical and ethnographical artifacts.

It is fortunate that boceto will be presented to the public, for them to decide on its authenticity. But among known persons within the community, genuine interest has predictably been piqued, as the prices of the works of Luna and Hidalgo have been setting records on the auction block in the past few years. Coincidentally, the most expensive Philippine artwork ever sold was that of an earlier version of “España y Filipinas” done by Luna at a staggering P130 million at a Sotheby’s auction in 2013, and is currently in the permanent collection of the National Gallery Singapore. One commenter online has said this would be a “poignant” time for the boceto of the "Spoliarium" to set an even higher record when it comes under the hammer on the weekend of September 22.

With auction prices ever reaching incredulous levels, there is a danger of running amuck with forgeries, noting the prevalence of European paintings being passed off as Philippine masterpieces. But there are tests that can be conducted, one of which is for the work to undergo a thorough examination under UV light, to show the degradation of the pigments. Forgers would change the background, or add a signature on the foreground to mimic the style of the artist’s hand. The examination in this case concluded that under UV light, the famous “LVNA” signature disappears, an indication of the work not being misappropriated, as well as being indicative of age in excess of a hundred years.

These tests should be continued with more research by academics, art critics and historians to further the truth of this mysterious boceto. When pressed on the matter of its authenticity, Lerma stated to the gathered members of the press: “In my view this is the original 'Spoliarium' because it is the earliest version... The evidence is there and no one has yet showed any evidence to disprove that the boceto is not authentic. For all intents and purposes, based on material and historical evidence, provenance, photographs, literature, newspapers, all say that this is the long-lost boceto of Juan Luna y Novicio.”

All the eyes of the local art community will likely be on what the reaction to the boceto will be when it is brought to the auction floor, but one thing is certain: we can't wait to see how this mystery ends.

Salcedo Auctions' The Well-Appointed Life will be held at The Peninsula Manila's Rigodon Ballroom from September 22 to 23, 2018.

Spoliarium Salcedo Auctions Art Juan Luna Auction
Your Guide to Thriving in This Strange New World
Staying
In? What to watch, what to eat, and where to shop from home
OR
Heading
Out? What you need to know to stay safe when heading out