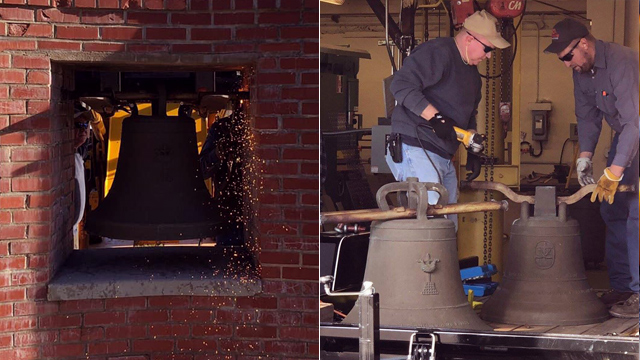 And why it matters.

(SPOT.ph) After more than a century on U.S. soil, the Balangiga Bells are finally coming home on Tuesday, December 11. President Rodrigo R. Duterte is expected to formally receive these items through a handover ceremony at the Philippine Air Force Grandstand, Villamor Airbase in Pasay City. This was after U.S. Secretary of Defense James Mattis officially announced on November 15 at the F. E. Warren Air Force Base in Wyoming that the historic and religious relics would be returned to the Balangiga Church in Eastern Samar.

The three bells were first mentioned by Duterte in his State of the Nation Address on July 24, 2017. "They are ours. They belong to the Philippines. They are part of our national heritage. Isauli naman ninyo. Masakit 'yan sa amin," he said, addressing the United States. The church bells were taken as war trophies by American soldiers after the 1901 Balangiga Massacre, an incident that held different meanings for the opposing countries during the Philippine-American War.

For the U.S. Army, it was the worst defeat after the townspeople organized a surprise attack during a funeral mass at the dawn of September 28, 1901. The church bell rang as a signal for Filipino fighters dressed in women's clothes to grab their bolos from the coffins and enter the enemy's garrison. The casualty rate was at more than 50%.

For Filipinos, it was one of the most tragic moments in our history as Brig. Gen. Jacob Smith declared that the "interior of Samar must be made a howling wilderness" with the order to "kill everyone over the age of 10." Maj. Littleton W. T. Waller, who was under Smith's command, was later nicknamed the "Butcher of Samar." Both Smith and Waller were court-martialed for violating military discipline, though the former was only forced to retire and the latter was acquitted. The Balangiga Bells were taken by the 9th U.S. Infantry Regiment as war booty. Two bronze bells were put on display at the at F. E. Warren Air Force Base (former Fort D. A. Russell) while the third was kept at a U.S. military museum in Camp Cloud, South Korea.

Numerous attempts have been made in the past to recover the bells, including a request by noted historian Fr. Horacio dela Costa in 1975. He wrote to the 13th Air Force in Clark Air Base to look into the return of the bells, citing the Franciscan Order in the Philippines’ ownership as indicated by the Franciscan emblems engraved on the bronze structures. In the '90s, former President Fidel V. Ramos was told by the U.S. government that the bells' return to the Philippines would entail an Act of Congress.

U.S. war veterans were also sympathetic to the Philippines' cause. In fact, a couple of retired U.S. Navy captains organized "Bells of Hope," which not only looked into the process of returning the Balangiga Bells but also successfully turned over the San Pedro Bell taken by American troops from Bauang, La Union.

During the Association of Southeast Asian Nations Plus meeting in Clark, Pampanga in October 2017, Philippine Ambassador to the U.S. Babe Romualdez made the same request to Mattis. Incidentally, the Veterans Memorial Physical Integrity Act of 1998, which barred the U.S. president from transferring any "veteran memorial objects" to a foreign country, expired on September 30, 2017.

The return of the bells to their rightful place is not only a success story for those who fought for their homecoming, but also a symbol of Filipino bravery and unity in the past and present.

UPDATE (December 10, 5 p.m.): Malacañang announced on Monday afternoon that the arrival rites will proceed on December 11, but the president would not be present.