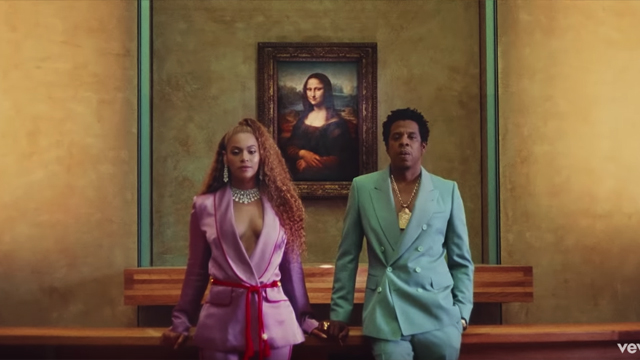 Louvre's Foot Traffic at an All-Time High, Thanks to Beyoncé and JAY-Z

The museum now has a "JAY-Z and Beyoncé at the Louvre" guided tour.

(SPOT.ph) Going to a museum hasn't always been seen as a "cool" thing to do. But The Carters (a.k.a. Beyoncé and JAY-Z) seem to have changed all that when they made Paris' famous Musée du Louvre the setting of their music video "Apeshit." The video was released online on June 16, 2018, and has since earned 150 million views. Thanks to this newfound popularity, the museum just recorded an all-time high of 10.2 million visitors for 2018.

The video featured the two artists singing in front of Leonardo da Vinci's "Mona Lisa;" all clad in white by Pythokritos's "Winged Victory of Samothrace;" and dancing in front of Jacques-Louis David's "The Coronation of Napoleon." In fact, the Louvre now has a guided tour, "JAY-Z and Beyoncé at the Louvre," that features all the works of art featured in "Apeshit." The themed trail runs for one hour and 30 minutes.

Musée du Louvre, with 72,735 square meters of gallery space, is the world's largest art museum. It was conceived in 1190 as a fortress meant to protect Paris, and later converted into the main residence of French kings starting with François I in 1528. In the 1700s, the Louvre housed several royal academies: the French Academy, the Academy of Inscriptions and Belles-Lettres, the Academy of Sciences, the Academy of Architecture, and the Academy of Painting and Sculpture. These made the site the center of arts in Paris. Following the French Revolution, in 1793, the revolutionary government opened Musée Central des Arts in the Grande Galerie to the public. Now, it houses more than 400,000 objects and 35,000 works of art—from the Egyptian antiquities to 13th-century paintings.

The museum's previous visitor record was at 9.7 million, following the inauguration of its Islamic Art section and exhibitions on Leonardo da Vinci and Raphael in 2012.

Musée du Louvre is at 75058 Paris, France. It is open from Wednesday to Monday. For more information, visit Louvre's website.