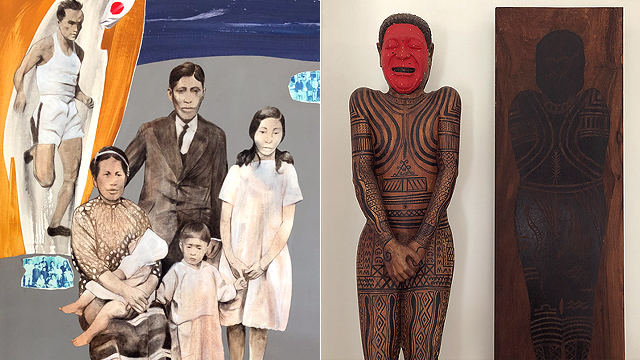 10 Must-See Masterpieces at the BenCab Museum

It's only a 15-minute drive from Baguio City.

(SPOT.ph) Through the years, Baguio City has been popular for its scenic landscapes, rich food culture, vibrant night life, chilly weather, thrift shopping, and diverse peoples. What most people do not easily recognize is the city’s cultural and artistic treasures that can be found in various spaces around the vicinity. Just seven kilometers away from Benguet’s busy capital, BenCab Museum in Tuba, Benguet stands out as a bastion of artistic excellence and cultural richness.

The four-storey art hub was opened by National Artist for Visual Arts Benedicto "BenCab" Cabrera in 2009 and has since been committed to promote the preservation and conservation of the arts as well as the protection of the environment, culture, and tradition of the Cordilleras. It also stays true to its vision to bring the arts closer to the public by adding a different kind of experience to visitors of Baguio City.

We list down 10 masterpieces you shouldn't miss when at the BenCab Museum:

This large painting, which features more renditions of Sabel, welcomes the museum’s visitors at the patio a few steps away from the entrance. It showcases his distinct style of bold, free-flowing brushstrokes and the clever use of abstraction. BenCab is known to portray Sabel on his works—a homeless, wandering woman he often saw in Bambang, Manila during the 1960s.

Gregory Raymond Halili’s watercolor and gold dust on paper is rendered carefully given its intrinsic details. The artist himself painted this using a large magnifying glass, so he can focus on its details despite being small in size.

Apart from Sabel, one of the themes in BenCab's works is life during the Japanese occupation. This acrylic-on-canvas painting portrays the first Japanese who married an Ibaloi woman in Baguio. It is said that the actual pictures used in the work came from the little boy in the picture, the son of the couple.

Jordan Mang-osan is popular for his “solar drawings,” where he employs the use of sunlight and a magnifying glass to creatively render his intricate works onto wooden boards. He is self-taught and known to preserve and show Cordillera culture through his works.

Known for her sculptures and monuments made of terracotta and bronze, Julie Lluch refers to her use of these media as gratifying and sensual. Apart from being one of the most posted works on social media, "Lily for Georgia" speaks of feminism, which is true to the award-winning artist’s advocacy. Lluch is also part of various movements and groups on feminism in arts and culture.

This 55-by-50-centimeter work is BenCab's first painting of Sabel. Unlike "32 Variations on Sabel," this take on the mysterious woman is rendered in a darker tone and tighter strokes.

This straightforward and clever oil-on-canvas work by Lynyrd Paras reminds the viewer to not sweat the small stuff. Paras is known for his palpably intimate works, most of which feature faces superimposed with thought-provoking text.

The Maestro Gallery features BenCab's personal collection of works by masters in Philippine art. This includes National Artist for Visual Arts Jose Joya, who was the pioneer of abstract expressionism in the Philippines. He was also known for heavy impasto strokes in his works.

Luis E. Yee, Jr, also known as Junyee, pioneered site-specific art installations in the Philippines about environment and ecology. True to this advocacy, he always uses found objects in his works. "Pintados," which makes use of recycled wood, is Junyee's interpretation on how indigenous culture strives for modern civilization.

Bencab Museum Baguio Benguet Tuba Travel Art Museum Evergreen
Your Guide to Thriving in This Strange New World
Staying
In? What to watch, what to eat, and where to shop from home
OR
Heading
Out? What you need to know to stay safe when heading out