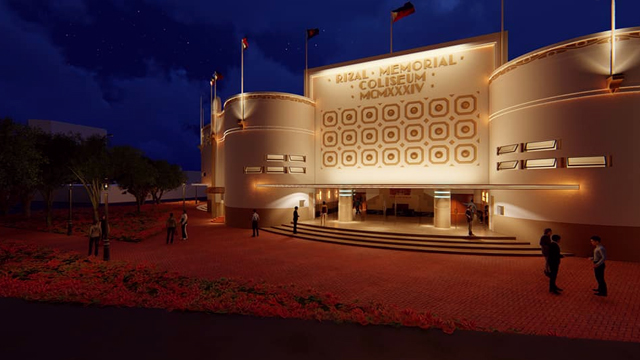 The Art Deco building is returning to its original design.

(SPOT.ph) With less than three months left before the much-awaited 2019 Southeast Asian Games, which will be hosted by the Philippines, renovation and construction of our sports venues are in full swing. And for the first time in 85 years, the 8,000-seater Rizal Memorial Coliseum in Manila is undergoing a major rehabilitation with heritage conservationist and architect Gerard Lico at the helm. In his Facebook post dated August 23, we see how the restored Art Deco building will look—and it's grand as ever.

The Rizal Memorial Coliseum, which is part of the 10-hectare Rizal Memorial Sports Complex, was designed in the Art Deco style by Juan Arellano—the same guy behind the design of the Metropolitan Theater. It was first used for the 1934 Far Eastern Championship Games, the region’s biggest sports events before the Asian Games was established. The whole complex was destroyed during World War II, but was reconstructed in time for the 1954 Asian Games. It also hosted three editions of the Southeast Asian Games (SEA Games): 1981, 1991, and 2005. We almost lost this historic sporting venue in 2016 when reports surfaced that the former administration of Manila bared plans to sell the property to a private entity. Heritage advocates and cultural groups, however, stepped in; and the National Historical Commission of the Philippines declared the Rizal Memorial Sports Complex (RMSC) a National Historical Landmark—ensuring that the structure won't be subject to demolition or improver renovation.

Construction started on July 8, Lico confirms with SPOT.ph. He also explained that the Rizal Memorial Coliseum will serve as a practice facility for our athletes aside from being the main venue of the men's football event for the SEA Games.

One of the notable repairs being done "to return this Art Deco beauty to its original look," according to Lico, is the removal of the add-on canopy by the Coliseum's entrance. This "ruins the proportion of the building and makes the lobby dark. Moreover, the large canopy encourages informal businesses to thrive in front of the building aggravating the urban blight within the vicinity," the architect added. Lico's team also unveiled a lost porthole window, which was present in archival photos but was covered with cement during improper repair. He explained that while building restoration is all about retaining the original materials and design of the structure, it also permits the removal of expansions and add-ons from later periods.

We have yet to see the fully restored Rizal Memorial Coliseum, but for now, we can learn more about the history of this Art Deco building through an exhibit plastered on the construction site's enclosure.

Photos and images used with permission from Arch. Gerard Lico.