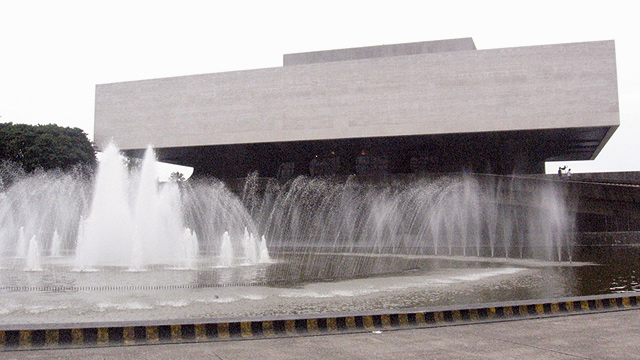 Take out your phones!

(SPOT.ph) The Cultural Center of the Philippines, the Metro's hotspot for arts and culture, was established in 1969. It's the home of the country's national artistic groups; regular seasons of theatrical productions, film screenings, and art exhibitions; and other cultural events. It may be around for a while now, but the Cultural Center of the Philippines (CCP) continues to enrich our cultural landscape in these changing times and digital age. In August, they launched the CCP’s ticketing app; and on October 15, they introduced QRAted—a public guided tour aided by quick response code (a.k.a. QR code).

Anyone can now go around CCP and learn more about the artworks on display, exhibition spaces, performance venues, and even architectural details of the five-storey CCP Main Theater Building. All you have to do is bring out your smartphone, scan a QR code found on the walls, and enjoy instant access to a trove of information.

The CCP Main Theater Building or Tanghalang Pambansa was designed by National Artist for Architecture Leandro Locsin, who was also behind the other structures within the CCP Complex. It features a Brutalist architecture and bahay-kubo style, which is heavily characterized in the two-storey façade facing Roxas Boulevard. Inside, capiz-shell chandeliers capture the eyes of guests while a grand staircase leads to the upper floors. The Main Theater Building houses the 1,800-seater Tanghalang Nicanor Abelardo (Main Theater), another proscenium stage called the Tanghalang Aurelio Tolentino (Little Theater), a black box theater named Tanghalang Huseng Batute (Studio Theater), and the 100-seater Tanghalang Manuel Conde (Dream Theater).

The venue also has three exhibition halls, Bulwagang Juan Luna, Bulwagang Fernando Amorsolo, and Bulwagang Carlos Francisco—named after some of the most important Filipino visual artists. There are also three hallways used for displaying artworks, namely: Pasilyo Victorio Edades, Pasilyo Guillermo Tolentino, and Pasilyo Vicente Manansala. The Museo ng Kalinangang Pilipino, which was established in 1988, can be found on the fourth floor.