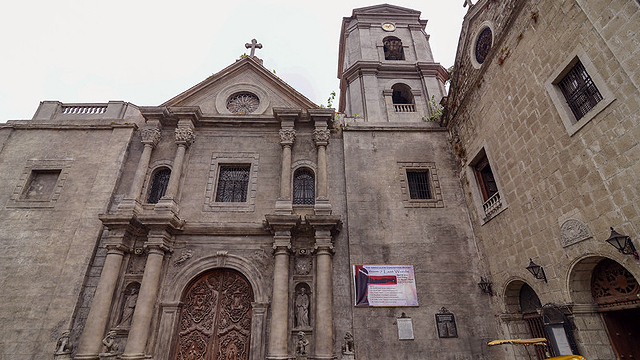 (SPOT.ph) With more than 300 years under Spanish colonial rule, it doesn't come as a surprise that the Philippines has a lot of Catholic churches built from centuries past. The oldest of these is the 16th-century San Agustin Church in Intramuros, Manila, which boasts a massive exterior made from natural stone. This means that the delicate façade of the UNESCO World Heritage Site is always at the mercy of algae and mosses, plus dirt from the city's pollution. Kärcher, a German company specializing in restorative cleanup of historic sites, is giving San Agustin Church a much-needed deep cleaning for free from November 14 to 21.

Kärcher's professional hot water high-pressure cleaner is highly recommended in cleaning, restoring, and preserving structures made from minerals like limestone. The steam reaches deep into the boulders, destroys budding vegetation, and delays biogenic growth. Thorsten Moewes, cleaning expert of Kärcher, explained during a demonstration that their machine can heat water to a maximum of 150 degrees Celsius and produce steam that has a temperature ranging from 90 to 100 degrees Celsius. This heat effectively kills algae and moss.

At the same time, the pressure is gentle enough to not wash off or damage the building's natural material, but still be efficient in removing dark spots and surface contamination caused by heavy carbon emission within Manila City. "We don’t want the impact of high-pressure water on sensitive stone like limestone, sandstone, and adobe," Moewes points out. For the cleaning of San Agustin's façade, the pressure from the machine is dialed down to 50%. "We are cleaning not with high pressure, but with high temperature and power of steam," he says. Research and documentation are also part of the process to make sure that the structure's original integrity is kept intact.

Rev. Fr. Ricky Villar, OSA, director of San Agustin Museum, revealed to the press that the last time that the building façade was cleaned up was six or seven years ago. A general cleaning of the San Agustin Church often means erecting scaffolding and manual scrubbing of the walls. This takes time and disrupts the daily activities inside the church and the adjoining museum and convent, so an efficient and proper cleaning process by Kärcher is more than welcome.

This is the third Philippine landmark that the German cleaning company is focusing on as part of its cultural sponsorship program called "Kärcher Cleans the World." They have, in the past, spruced up the Rizal Monument in 2017 and the People Power Monument in 2018. More than 140 monuments around the world were also cleaned up since 1980, including the Ancient Cononian Wall in Piraeus, Mount Rushmore in Dakota, Teatro Verde in Italy, the Space Needle in Seattle, Namsan Tower in Korea, and Nihonbashi Bridge in Japan.