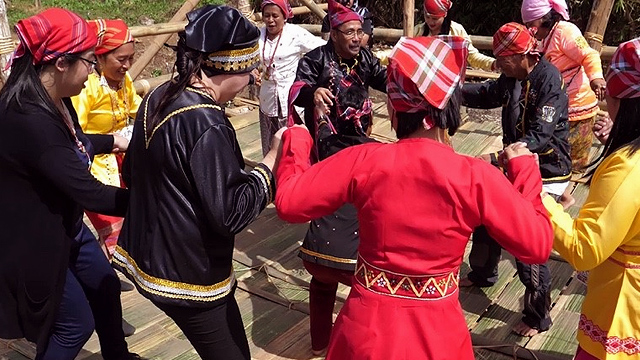 Buklog is a thanksgiving ritual practiced by the Subanen people in Zamboanga.

(SPOT.ph) With the large number of ethnolinguistic groups in the Philippine archipelago (244 in total, subgroups included), it doesn't come as a surprise that we have plenty of diverse traditions.

Down south, for example, a thanksgiving ritual by the Subanen people in the Zamboanga peninsula involves the art of dance, and it's caught the attention of the United Nations Educational, Scientific and Cultural Organization: The buklog was inscribed on the agency's List of Intangible Cultural Heritage in Need of Urgent Safeguarding during the 14th Intergovernmental Committee for the Safeguarding of the Intangible Cultural Heritage (ICH) Meeting in Bogota, Colombia, held from December 9 to 14.

Buklog includes several components. "Dances are performed on an elevated wooden structure called the buklog, which resonates with a sound believed to please the spirits. It is followed by a community dance to mark the renewal of social ties," according to the United Nations Educational, Scientific and Cultural Organization citation. The thanksgiving ritual celebrates the group's bountiful harvest, recovery from sickness or calamity, or acknowledgement of a new leader. It is often conducted by the village chief called timuay and a religious leader called balyan.

Through the years, the practice of buklog has become irregular and has only been held once in seven to nine years, according to the National Commission for Culture and the Arts. This threat to its existence is partly what led to its inclusion in the List of ICH in Urgent Need of Safeguarding. This means that the agency will "help to mobilize international cooperation and assistance for stakeholders to undertake appropriate safeguarding measure."

Locally, the National Commission for Culture and the Arts (NCCA) is already facilitating the transmission of Subanen traditions to the younger generation through the Subanen School of Living Tradition. Through the School of Living Traditions in various places in the Philippines, a culture specialist, a culture bearer, or the village leader teaches skills and techniques of a traditional art or craft through non-formal demonstrations.

"As a part of the social fabric of Mindanao in the southern Philippines, we see this inscription as strengthening the bonds of fraternity and solidarity in a resilient region that seeks to permanently replace conflict and discontent, with peace, hope and sustainable development," Ma. Theresa P. Lazaro, the Philippines' ambassador to France and the country's delegate to the United Nations Educational, Scientific and Cultural Organization (UNESCO), said during the conference.

Buklog is the Philippines’ first item in the preservation roster of the UNESCO. Other newly inscribed elements on the List of ICH in Need of Urgent Safeguarding are: the Seperu folkdance and associated practices in Botswana, rituals and practices associated with Kit Mikayi shrine in Kenya, the Sega tambour Chagos in Mauritius, and spring rite of Jurauski Karahod in Belarus.

The United Nations also has the Representative List of the ICH of Humanity, which is composed of "intangible heritage elements that help demonstrate the diversity of this heritage and raise awareness about its importance." Three Filipino traditions are included in this roster: the Darangan epic of the Maranao people of Lake Lanao (2008), the Hudhud chants of the Ifugao (2008), and tugging rituals and games (2015).