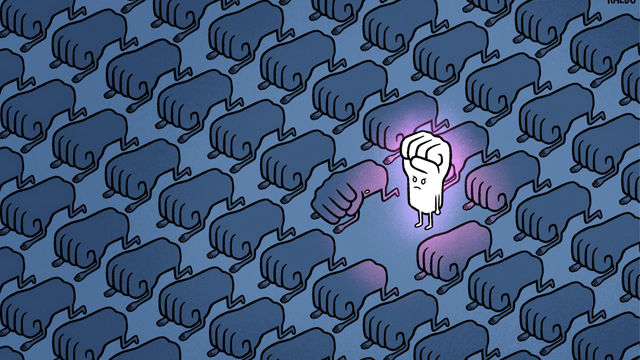 How to Make Your Own #Tumindig Icon

(SPOT.ph) #Tumindig has gone viral in the last few days after artist Kevin Eric Raymundo, better known as Tarantadong Kalbo, released an illustration of a raised fist standing its ground amid rows of bowed fist bumps on Saturday, July 17. To show their support, local artists, writers, and activists have been making and adding their own fist-shaped avatars. And you can make your own raised-fist icon, too.

Raymundo on July 22 posted a blank template of the now-viral raised-fist icon. "Edit. Draw. Paint. Print. Digital. Trad. Lahat tayo ay #Tumindig," he tweeted in his call to action. He also uploaded it as a transparent .png file, which is a lot easier to edit and insert in the Tumindig illustration.

Tumindig references the administration's signature gesture of a fist bump, which President Rodrigo Duterte would often do in photos along with his supporters. The dissenting image, which is that of the raised fist, is a long-standing symbol of political solidarity. For the many people who created their own raised fist, it's a symbol of their protest against human-rights violations, extra-judicial killings, and corruption, among others.

Other personalities who have made their own raised fist are community-pantry organizer Patreng Non, Papemelroti owner and artist Robert Alejandro, and comedian Jun Sabayton. Collectives expressing their support include Student Aid Network, SAKA, and UP Babaylan.

Adventurer Savvy Seasoned Tarantadong Kalbo Government Trending Web Comics Art Staying In Filipino Artists
Your Guide to Thriving in This Strange New World
Staying
In? What to watch, what to eat, and where to shop from home
OR
Heading
Out? What you need to know to stay safe when heading out