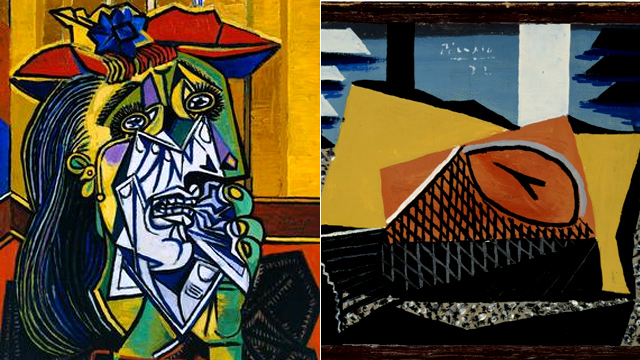 10 Popular Picasso Paintings and Where To Find Them

Most of Pablo Picasso's works are in museums around the world.

(SPOT.ph) Spanish painter Pablo Picasso (1881-1973) is one of the most influential artists of the 20th century. His name is up there with Vincent van Gogh, Claude Monet, Henri Matisse, and other personalities that we've come to know through art history classes. This is because he was one of the co-founders of the Cubist movement, where geometric shapes depict human forms as a form of visual abstraction. As a prolific artist, his own style also changed over time, giving his own body of works a history of its own.

Also read: 10 Philippine Museums and Galleries You Can Visit From Home

If you want to learn more about him, here are where 10 popular Picasso paintings are currently located around the world:

This large oil painting on canvas is one of Picasso's best-known works, regarded by many as a powerful anti-war painting. Measuring 3.49 meters tall by 7.76 meters wide , it portrays the violence and chaos that filled the air during the 1937 bombing of Guernica, a town in northern Spain that was bombed by the Nationalist faction, including Nazi Germany and Fascist Italy, during the Spanish Civil War. Some of the prominent elements in "Guernica" are screaming women, a dead baby, dismembered soldiers, and a bull.

Created in 1904 but printed in 1913, "The Frugal Repast" signals Picasso's career as a printmaker despite a lack of formal training in this specific medium. The etching is printed on a plate that's the size of 46.3 x 37.7 cm. It depicts themes of isolation and despondency; themes often seen in Picasso's works in those years.

Picasso's "Bust of a Man" was one of his early experiments with Cubism, wherein he used imagery from Iberian and African sculptures and applied abstractions to the figure's face. Painted through oil on canvas, the artist used colors of deep orange, rust, and brown—common hues in African wood masks.

Location: Museum of Modern and Contemporary Art of Trento and Rovereto, Italy

The title of Picasso's still-life piece is literally translated to "still life with fish." It follows a long-standing tradition of realist artists, who painted a handful of fish as realistically seen on a chopping board or a plate. But Picasso's piece, in true Cubism fashion, is painted with geometric shapes and vibrant colors.

"The Weeping Woman," as translated in English, is claimed to be a continuation of the tragedy found in another Picasso piece "Guernica." This work focuses on the image of a woman crying, referencing not only the post-Spanish Civil War but also the all-encompassing image of suffering.

Another oil painting from Picasso's dark-themed "blue period," "The Old Guitarist" depicts a musician in worn-out clothing playing in the streets of Spain. The Art Institute of Chicago was the first American museum to put a Picasso on display when it acquired this piece in 1926.

Picasso's portrait of writer Gertrude Stein was from Picasso's "rose period," which signifies the time when the artist used bright orange and pink colors—an obvious shift from his somber blue hues during his "blue period." This original piece was given directly to The Met by Stein herself.

While "Les Demoiselles d'Avignon" was completed in 1907, it wasn't until 1916 that the public was able to view the painting at the Salon d'Antin. Picasso kept the piece hidden in his studio in Paris for years because of the controversial (and mostly negative) reaction of his peers towards the painting. A common example of the artist's cubism paintings, "Les Demoiselles d'Avignon" shows distorted images and geometric abstractions of the female body.

Given its bright colors and geometrics, "Girl Before a Mirror" is probably one of Picasso's most cubism-styled works. According to MoMA's founding director, Alfred H. Barr Jr., the artist "preferred this painting to any of the others."

Painted during his stay in Paris in the winter of 1901, Picasso's self-portrait marked the beginning of his "blue period." He was only 20 years old at the time, but the portrait depicts an older-looking figure, bearing the somber mood of Parisian winter.