Man Throws Cake at the Mona Lisa Painting at the Louvre
Loading
Already a member? Log in
No account yet? Create Account
Spot.ph is your one-stop urban lifestyle guide to the best of Manila. 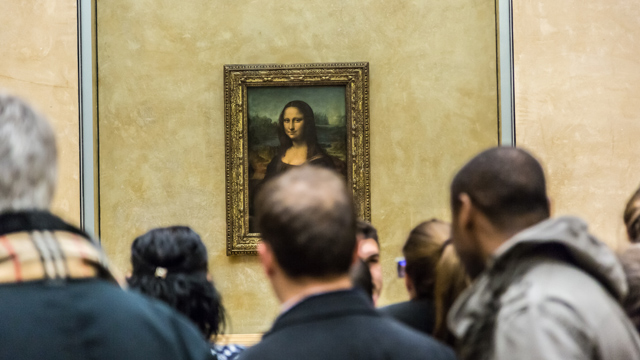 Is it Cake? Climate Activist Throws Cake at the Mona Lisa

It isn't the first time that the Mona Lisa is the subject of "attacks."

(SPOT.ph) Yes, that happened. A man described to be disguised as an old lady wearing a wig and in a wheelchair threw a piece of cake at Leonardo da Vinci's famous Mona Lisa painting that's currently hanging at Louvre Museum in Paris. The painting, which was enclosed in a bulletproof glass case, was not damaged. Photos and videos of the incident immediately went viral online on Monday, May 30, with some shots showing a museum staff cleaning white cream off the glass encasing, an attendant removing a wheelchair in front of the masterpiece, and pieces of wilted roses on the floor (which were thrown everywhere by the perpetrator).

But this isn't the first time that the 16th-century painting made the headlines. Initially part of French King Francis I's royal collection following da Vinci's death, the Mona Lisa was claimed by insurgents during the French Revolution. It was later hung in Napoleon's bedroom before being installed at the Louvre Museum in the 19th century.

Its first brush with death, so to say, was in 1911 when the painting was stolen from the Paris museum. The incident was so big that people flocked to the Louvre just to view the empty space from where the Mona Lisa was stolen. Poet Guillaume Apollinaire and artist Pablo Picasso were also arrested as suspects. As it turns out, it was an inside job. Two years after the incident, Uffizi Gallery director Giovanni Poggi went to the authorities after a man tried to sell him the Mona Lisa painting. The investigation led to one Vincenzo Peruggia, an Italian immigrant who briefly worked at the museum and helped construct the painting's glass case. He spent a few years in jail, then later served in the Italian army during World War I. The incident was described as one of the greatest (if not the greatest) art theft of the 20th century.

In 1956, one Ugo Ungaza Villegas from Bolivia threw a rock at the Mona Lisa. The force was so strong that the rock shattered the glass case that was protecting the painting and smeared a speck near the left elbow of the portrait.

In 1974, while the Mona Lisa was on display at the Tokyo National Museum, a woman sprayed the masterpiece with red paint. It was meant to be a protest against the museum's inaccessibility to PWD guests.

In 2009, a Russian woman threw a ceramic teacup against the painting's glass enclosure. But in the game of ceramic versus glass, it was the teacup that was shattered. The woman apparently was furious over being denied French citizenship.

Louvre has yet to release a statement about the 2022 caking incident.