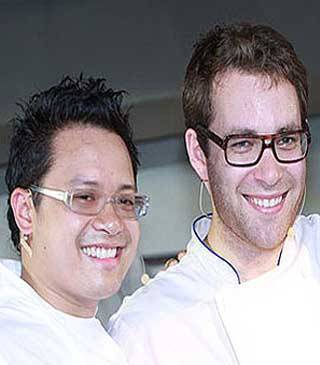 Season 2 Top Chef winner Ilan Hall and Season 4 contestant Dale Talde both loved the corned beef sinigang at Sentro and the tinomok at Gerry's Grill, but one of them hates Tyra Banks and the other loves her "fat ass."

What happens to Top Chef winners and eliminated contestants after they've packed their knives and gone? SPOT chatted with the two of them before one of their live cooking demos during their Ayala mall tour last month.

After a surprising move to Los Angeles, Chef Ilan is opening his new restaurant, Gorbals. Named after the neighborhood his Scottish father grew up in, his much-anticipated eatery will be serving, in his own words, "Jewish food date-raped by bacon." Chef Dale, after introducing halo-halo to Middle America and a scrape with TV television notoriety (involving some punching, cursing and crying), returned to line at the chi-chi New York restaurant, Buddakan. Now an executive sous chef, Chef Dale aspires to create a chain of Asian-inspired restaurants called DQN (Dale's Quality Noodles).

SPOT: Compare life before Top Chef and life after.
Ilan: I haven't really worked in a kitchen on a regular basis in the past two years. I've traveled a lot. [Before Top Chef] I was working long hours every day as a servile New York City line cook at Casa Mono. After [the show], I had to leave. It was an open kitchen and my chef was getting really, really…I wouldn't say pissed off…but it was distracting. I was distracting the flow of the restaurant. It was not a positive thing. It's a great place. I felt I was hindering things.

Dale: The day-to-day of my life stayed normal, which I wanted. I wanted to be the same guy going into the show and leaving it. I didn't want anyone to ever accuse me of being "Hollywood" or being bigger than I really was. I wanted to maintain the integrity of who I was and my vision of where my career and where my life was going. I wanted to be a chef first and foremost. Whatever came. These beautiful opportunities to travel the world…are probably the biggest things that have changed.   A lot more travel.

SPOT: Besides   Jollibee Chickenjoy, what have you tried here?
Dale: We had corned beef sinigang [from Sentro 1881]. It's a quintessential Filipino dish.

Ilan: That was excellent. What was the name of that fish thing wrapped in a leaf for lunch yesterday? It was like ground fish…Super good.

Dale: At Sentro, we had a green mango salad with the little dried shrimp and salted duck egg. I get goosebumps just thinking about it. It's a flavor profile I had totally forgot. My grandmother used to have green mango and bagoong just like that--a rustic version of this salad but they dressed it up. And you know, it was just beautiful.

Ilan: It was so good. That could have been my favorite thing there.

SPOT: What do you think of Filipino food now?
Ilan: I love it. It's delicious. It's so cool to see the food and how it was so influenced by different cultures. There is so much American influence here. It's surprising. Not surprising based on the history but just like what sticks. And there is, of course, the Spanish influence and we are surrounded by water. It is different from what I expected.

SPOT: Dale, You haven't been home in 20 years. You described the balikbayan guy in the No Reservations' Philippines episode as bland.   If you were traveling with Chef Bourdain, where would you want to go and what would you want to eat?
Dale: I would definitely have him try adobo. He did the lechon, but I'll have him do adobo. I'd have him focus on a lot of the seafood here, the freshness you can get. I remember when I was young, my parents took us to a seafood restaurant–I think it was in Iloilo–where you had to walk out to a deck. It was by the ocean and it dropped down to a pool where they had all the crabs, shrimp and milkfish. They just ask, "Well, what do you want?" "Grill that and show us what typical Filipinos eat everyday."

SPOT: How has being Filipino influenced your culinary point of view?
Dale: Growing up I ate Filipino food almost every day. So my palate was already in tune with bright and "garden to table" flavors. My mother had a garden where she grew vegetables that she couldn't get regularly in the States. More of an influence was their work ethic–watching my dad leave for work at 5 a.m., not come back 'til 6 p.m., and being called to work at all hours of the night.   Seeing my mom work back-to-back 16-hour shifts at the hospital. I think that gave me a foundation for the way I am now about working hard.

SPOT: What is an indelible childhood memory concerning food?
Ilan: It was fried calamares in Greece on an island called Skiathos. The wife is the chef. The husband goes out [to fish], grabs a net and whatever he catches is what you eat. I was four and that was the first time that I ate something and it affected me. I couldn't forget.

Dale: At Christmas get-togethers, my aunt always makes kare-kare. Once, I passed by it and for some reason, I ate a piece of it. I learned about oxtails in CIA. It really struck me that she makes the best kare-kare and that this was probably one of my favorite dishes.

SPOT: Certain food writers have implied that people who work in cramped, hot and almost hostile environment of a kitchen are strange, and unusual human beings. Do you agree with that?
Ilan: Yeah, you have to be a little bit crazy to want to have that as your profession. It's so intense and taxing that you have to be a little bit of a masochist. You want to get burned a little bit. But it's also like a passion thing. You have to want to love it. You know, love to do it…

Dale: I don't compare what we do to artists, but I think we're more craftsmen than anything. But that tortured soul of an artist, all chefs carry that with us. After service, we get drunk, then we get hung over the next day and do it all over again. It's a wicked cycle.

Ilan: We beat ourselves up over what we did wrong.

Dale: Yeah. And then you know we inflict more pain by drinking more. Then the next day, you feel even worse than you did after service. But then you have to go into another service…

SPOT: Padma, Tyra, Heidi or Ryan? Choose one.
Ilan: I could give reasons for everybody. Tyra's crazy. But I hate her. I don't hate. I hate like two people in the world and she's one of them. It's like her and Adolf Hitler. And he's not even alive. I guess Padma because I know her. She's like, friendly.

Dale: This is not going to be PC but I'll go with Tyra because I love fat asses. I love them. It's an addiction. I love fat asses and thick thighs. My friends and everyone who knows me, knows my somewhat urban tendencies.

Photos by Dale Talde and courtesy of Ayala Land

Trinoma Gerry's Grill Boracay Top Chef Ilan Hall Dale Talde
Your Guide to Thriving in This Strange New World
Staying
In? What to watch, what to eat, and where to shop from home
OR
Heading
Out? What you need to know to stay safe when heading out