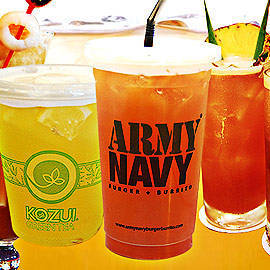 Brewed, shaken, and stirred: SPOT.ph rounds up the best iced brews in town.

(SPOT.ph) Here's a tip: don't ask what's in an iced tea. Not the amount of sugar, not the lack of tea, and especially not any of the secret ingredients. You either let Grandfather Google warn you of its so-called health risks, or you can turn the other way and accept it as it is-a really refreshing beverage, one of the world's most popular refreshments, and President Barack Obama's favorite drink (preferably black forest berry iced tea, we hear).

While the history of sweet iced tea is a tad foggy, What’s Cooking America noted that serving chilled, green tea-based drinks began as early as the 1800s. By World War II, however, sources for green tea were cut off from the United States, prompting people to make do with the now more popular black tea from India. Soon enough, iced tea became a cultural phenomenon-with every locale serving up its own version. But in a country where iced tea predominantly comes in a foil packet (or a bottle), finding ones that truly stand out taste-wise is a challenge.

We say, challenge accepted! Not counting the bottled kind for this list, we set out around Manila looking for the most delicious, thirst-quenching chilled teas available in restaurants and rounded up our favorites. Here, our top picks.

Besttea Top10icedteas Icedteainmetromanila Iced Tea
Your Guide to Thriving in This Strange New World
Staying
In? What to watch, what to eat, and where to shop from home
OR
Heading
Out? What you need to know to stay safe when heading out