CHECK IT OUT: New Dishes by Brothers Burger

(SPOT.ph) For nearly 15 years, Brothers Burger has been a sturdy fixture in the Pinoy foodie scene, despite the increasing number of burger joints creeping in. Even the owners unabashedly claim that they are the original gourmet burger joint. When asked why they remain unshaken, chef Quito Jose savvily answers,  "It’s so easy to look at your competition’s menu, copy and tweak it a little to make it seem better. It’s so much harder to innovate."

Innovation seems to be a key word for Brother’s Burgers plans for 2013. Keep an eye out for the series of changes that Brothers Burgers are cooking up, including a new look, a new campaign, and some new items on the menu, headlined by the Red Bun Black Angus Burger (P299). 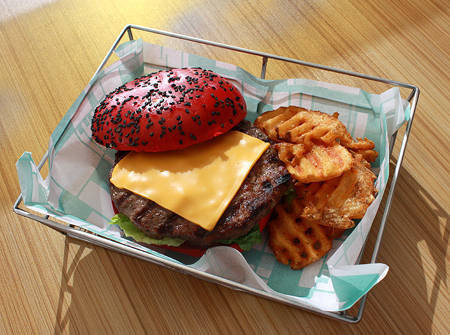 This is not just an auspiciously colored novelty (released in time for Valentine’s and Chinese New Year) for luck and romance or luck in romance. And no, that’s not food coloring, either.  The red bun is made from cranberries and beet root, which means you get a whiff of wine as you bite into it, followed by that sour, fruity taste that blends with the medium rare Angus beef patty. The Red Bun Black Angus Burger will available in all Brothers Burgers outlets until March 8. 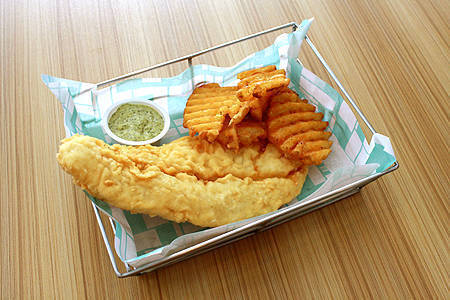 In the lightweight division (and just in time for Lent!), Brothers Burger serves up their version of the Fish and Chips (195), offering up a fillet of one whole dory served with either cilantro or dill cream. During our taste test, the batter proved a bit tough to saw through, but fish and chips is really more fun when eaten with your hands. The soft, steaming insides were a great match with the cilantro dressing. Did they offer malt vinegar as a dip, too? "Laspag na iyan," sniffs Chef Jose.

Consider Red Bun Black Angus Burger and the Fish and Chips only the tip of the iceberg lettuce when it comes to the new Brothers Burger menu, though. Despite our best wheedling and pleading, the owners could only drop sly hints about what’s next on the horizon. ("More colored buns." "Chicken.") They’re promising a whole lot for 2013, though, so we’re sure to have even more reasons to keep going back to an old fave.

Brothers Burger Angusburger Fishandchips
Your Guide to Thriving in This Strange New World
Staying
In? What to watch, what to eat, and where to shop from home
OR
Heading
Out? What you need to know to stay safe when heading out