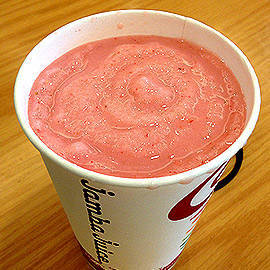 The secret is real! 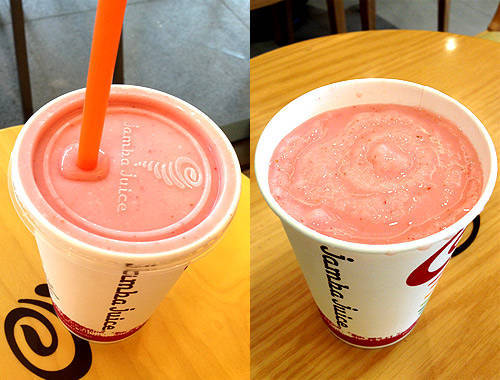 (SPOT.ph) There’s a certain thrill in ordering from Jamba Juice’s mysterious secret menu. For one, their seemingly mythical carte du jour is often only documented in blogs, a source that cannot exactly be considered unimpeachable. There’s nothing more embarrassing than going up to the counter and asking for "One Dirty Orgasm, please" and then getting a blank stare in response, along with, "Umm... This is Jamba Juice?" (Incidentally, this has happened to us but not with a smoothie and not in Jamba Juice.)

Ask the servers for confirmation and you’ll get that same blank stare. But apart from our own sources assuring us about the very real existence of these supposed secret drinks, The Huffington Post published a story on it, so we made a beeline for the nearest Jamba Juice determined to try one. The trick, it seems, is to just casually order. Say, "One White Gummi Bear" with a small shrug while opening your wallet to pay for the drink as if you’ve known about them all along, as if you were the one who discovered them, as if you invented them.

The White Gummi Bear, however, is old hat. The cult of the Jamba-Juicing blogosphere usually settles for the treacly soy pineapple-peach blend that has you wondering whether they tortured little white gummi bears into submission and murdered them in a blender. (Disclaimer: One member of the SPOT.ph staff disagrees, and likes the White Gummi Bear quite a lot.) For this roadtest, we wanted to try something a bit more humane (though not as embarrassing as the Dirty Orgasm, should the blogs prove false). So we went for the reportedly equally awesome, more benign, candy-inspired Pink Starburst.

Price and availability: Pink Starburst, like the rest of its ninja compatriots, fall under the same price range as Jamba Juice’s Creamy Smoothies. A small is P155, medium P175, and large P215. Jamba Juice has four branches around Metro Manila so it’s fairly accessible. We discovered, however, that the items on the secret menu are oftentimes more available than a regular item, specifically the perennially absent Acai Supercharger.

Best for: Summer, which is usually every day in the Philippines.

Best with: A bagel, or something simple and mildly flavored. Get it small so you’ll have room for a snack.

Tastes like: Starburst. It opens with that same candied tang. It even comes with that stuck-in-the-throat sweetness that results after eating a whole bag of this chewy delight.

Manage your expectations: It’s pretty true to flavor considering it’s not just Starburst thrown in a processor with some milk and ice. The blogosphere reveals that it’s made with lemon, soymilk, raspberries, yogurt, and fresh strawberries. Amazingly enough, we can’t make out those flavors individually-they come together as the candy that they’re trying to emulate. A rather cool surprise, we also found whole strawberries at the bottom of our cup.

Yay or nay: A big yippee! Now we know how Columbus felt when he discovered America...almost, anyway. This only proves thay there are secrets that are too good NOT to be shared.

Have you heard of any other secret flavors, or tried them? Tell us in the comments!

Jamba Juice Pinkstarburst Secretmenu Summer Gummi
Your Guide to Thriving in This Strange New World
Staying
In? What to watch, what to eat, and where to shop from home
OR
Heading
Out? What you need to know to stay safe when heading out