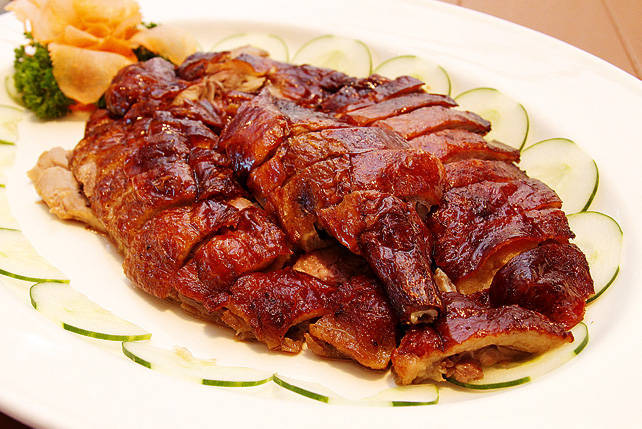 The best roast duck dishes in Manila have flocked together in one list. 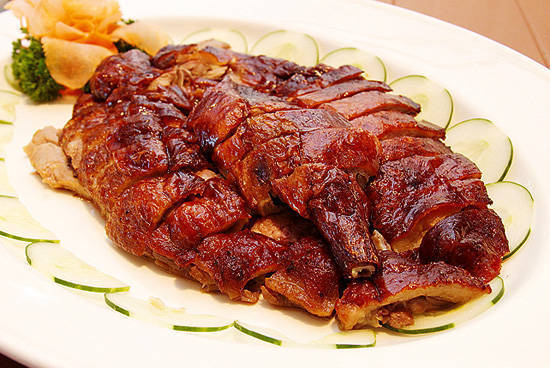 (SPOT.ph) Duck is as much of a tradition in China as tea. Among their popular variations are the Peking Duck and its oft-confused culinary cousin, the Roast Duck. The confusion is understandable since both are cooked in practically the same way. Roast duck, however, is just that-a duck that's roasted until tender, while the Peking style calls for seasoning and glazing before heading into the oven to hang. Plus, the former is eaten as is or with rice while the latter, with pancakes or steamed buns. A more in-depth comparison between the two is a story for another day. For now, we’re going simple in this list of Manila’s Top 10 Roast Ducks. 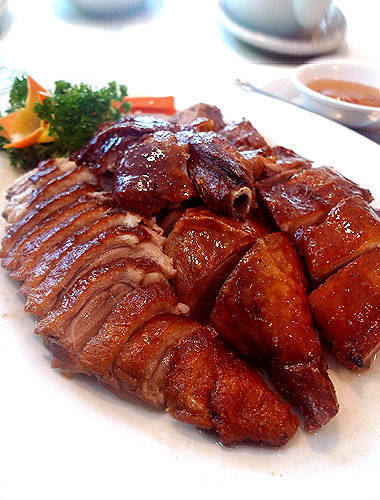 The tray, loaded with a beautiful arrangement of glossy, brown pieces of perfectly roasted duck, is a feast for the eyes. While the layer of fat underneath the skin made the meat a tad chewy, it didn’t lack the flavorful juices that highlights every single bite. It was so flavorful that the plum sauce was almost a non-factor. According to the menu, the duck comes from the U.S. which might be the reason why this will set you back P1,300 for half a portion and P2,500 for whole. 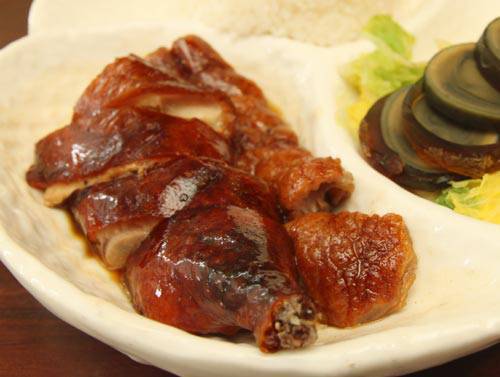 What's great about Gloria Maris is that it allows you to enjoy the duck whether you're with a big group or just dining solo. Orders come in half (P756), whole (P1,512), in a noodle soup (P195), and as a rice meal (P218). The latter is served with Taiwan pechay and slices of century egg. It’s comparably smaller than others, but it’s lean and flavor-packed with skin that’s perfectly crisp. Looking for a quick and affordable duck fix? Then Gloria Maris is for you. 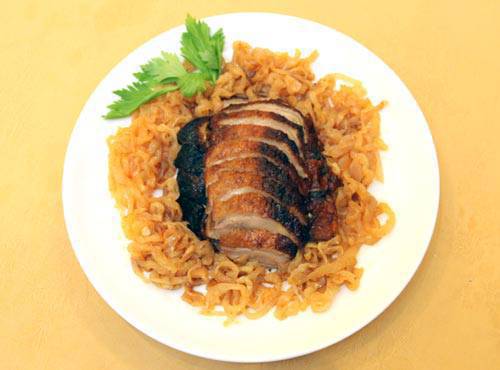 Of the lot, this is the most generous order of roasted duck, not because it had more slices than the usual but because it came surrounded with strips of jellyfish. The charred color may be a bit off-putting, but when it comes to flavor, it's just right. For an interesting play of texture, pair the jellyfish with the roasted meat. Jasmine’s jellyfish is pleasantly biting and matches well with the duck's subtle gaminess. Jasmine's Roasted Duck comes only in one size-small for P580, which is good for two to three people. 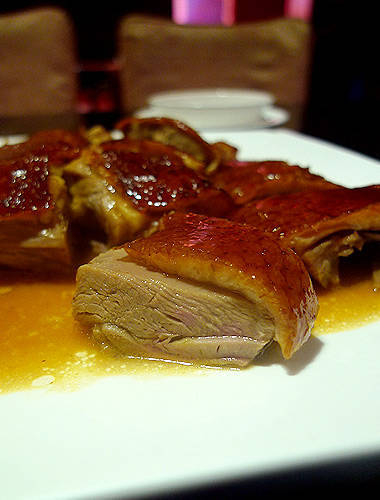 The row of roast ducks, pigs, and pigeons hanging near the entrance calls passersby to the restaurant. But the duck is the most entrancing: a fourth of an order (good for one person) will set you back P450 (P900 for half and P1800 for a whole) but will certainly have you indulging in succulent roast duck bathing in a puddle of its gingery drippings. The hint of sweetness lent by the complimentary plum sauce marries well with the meaty flavor, so it’s a must to dunk each slice in this sweet condiment. 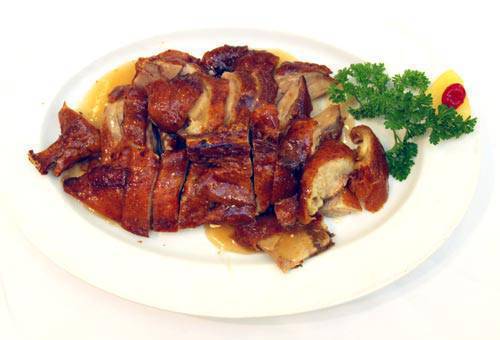 Forget that the slices of duck were plated without a lot of thought or that they were sitting on a shallow pool of oil. It will be easy to get over the initial impression after the memorable first bite. For one, the mouthwatering brown skincrackled while the meat was tender and juicy, like a sponge that has soaked up loads of flavor. The house-made sweet and sour plum sauce? A subtle but perfect foil to the flavorful main course. The roast duck is available in two serving portions-half (P700) and whole (P1,400), which, all things considered, isn’t bad at all. 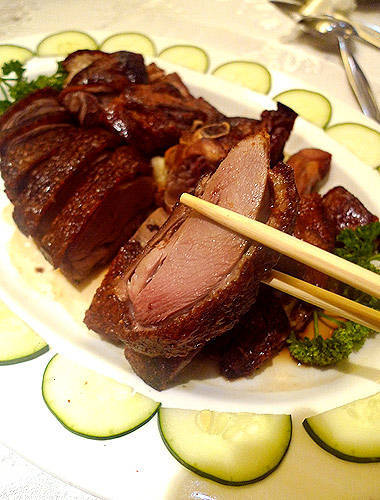 Despite being named Hong Kong Roast Duck (P900 for half, P1,800 for a whole), it’s not quite like the roast ducks in Hong Kong. However, the velvety dark skin was a delicious foil to the moist, toothsome meat. The dish comes with hoisin sauce, but ask for the plum sauce for a savory sweet and tarty delight instead. The dish came with a ring of half-rounds of cucumber, meant not simply for aesthetics, but to add freshness and to cut the duck's gamey flavor. 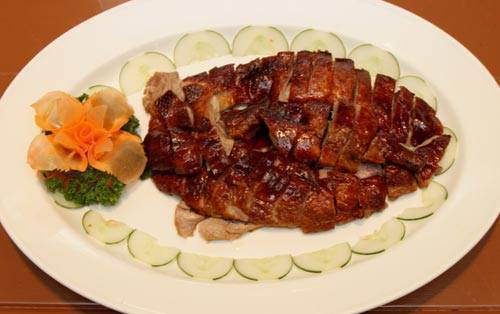 The duck's exquisite, gleaming dark caramel color in contrast to the meat's pink hue is a head turner-a perfect cook that translates to delicious savor. This first impression alone already makes the roast duck (P1,330 for half, P2,560 for whole) undeniably enticing and appetizing. It's simply beautiful both inside and out. 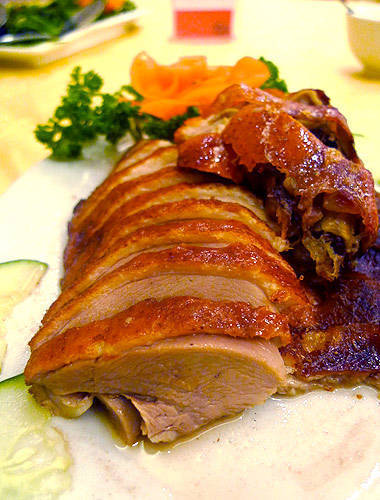 Thanks to its great menu, King Chef has become such a crowd favorite that it has taken over the spot next door to accommodate more people. Like many of its dishes, it's spot on when it comes to its Roast Duck (P450 for a quarter, P900 for a half, P1,800 for a whole). In fact, it boasts of the most tender meat on this entire list. The meat hardly puts up a fight when you slice it and it's not so greasy that the fatty oil leaves an uncomfortable mouthfeel. It’s served with hoisin sauce, but the dish can stand on its own even without it. 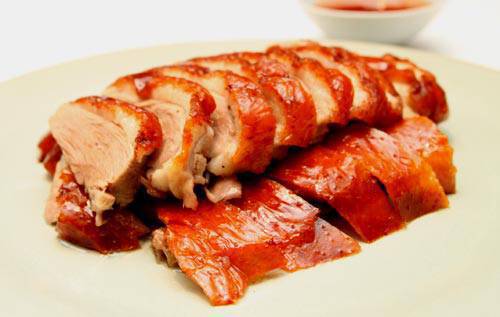 Li Li’s offering has a striking tan shade that brings to mind lechon kawali ratherthan duck. The duck was served plain with no garnish and only a side of plum sauce, as if to let the dish speak for itself. And boy did it speak volumes in terms of flavor. The succulent meat is soft, juicy, and so good that a half order (P1440) may not be enough (a whole order costs P2880). Li Li is among the city's best Cantonese restaurants and the way it prepares and roasts its ducks is a testament to that. 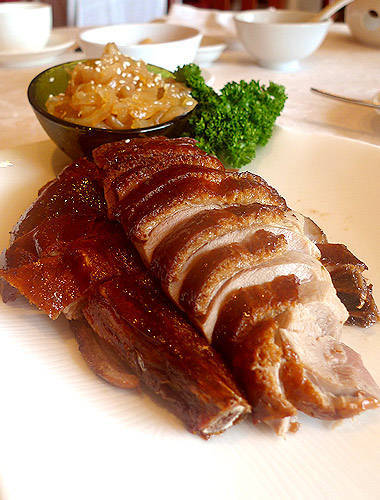 It's hard to find any fault with this one. The roasted golden brown color of the skin is gorgeous and the meat is in that perfect grayish brown. The small order (P840), plated in a single row, isn't swimming in a vat of fat, and comes with a bowl of jellyfish sprinkled with sesame seeds. Adding succulence to already succulent meat is the homemade plum sauce. Unlike other establishments, it comes in plating sizes and not as a fraction of the duck-P1,260 for medium and P1,680 for large. And if you're up for a different experience, the Palace also has roasted duck with fruits (P1,575 for medium, P3,150 for large), a lovely combination that will definitely please your adventurous palates. It's hard not to go wrong with this one.

Roast Duck Bestroastduckinmanila Bestduck Chinese Restaurants In Manila
Your Guide to Thriving in This Strange New World
Staying
In? What to watch, what to eat, and where to shop from home
OR
Heading
Out? What you need to know to stay safe when heading out