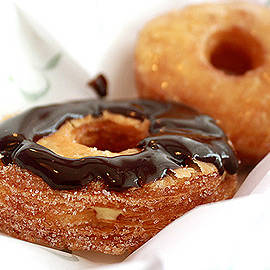 The latest contender in this burgeoning craze 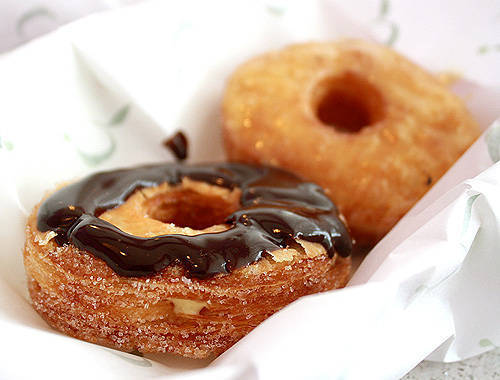 (SPOT.ph) They’re of the same size and shape as donuts, but flaky, an inch-thick structure made by stacking fine layers of sweet bread, then finishing off with a rough edge instead of the smooth roundness of the traditional O-shaped sweet. There’s a crisp as you slice into it, but it crumbles down into a soft, downy confection as you make your way to the bottom. A bit of cream in between gives it that mouthwatering decadence and it’s crowned with four variations of toppings: Glazed, Dark Chocolate, White Chocolate, and Sugar Raised.

Chatime is only the second dining destination in the Philippines to follow Dominique Ansel’s Cronut-frying footsteps after Wildflour. Theirs is slightly smaller, more manageable than the latter, leaving enough room for a spot of their Roasted Milk Tea, and for less than half the price of Wildflour’s Croissant Donuts. While its predecessors come off as tasting like a washer-shaped cream puff, Chatime’s Kronuts have that slightly unctuous quality of deep-fried pastry, and with the sprinkle of white sugar, it’s sort of like a beignet, but fluffier and less chewy. They’re not exactly heavy, but one would be enough to tide you over for the rest of the day. 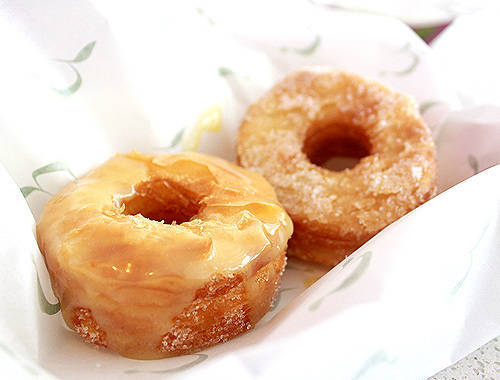 Chatime launched their Kronuts on June 18, 15 days after Wildflour. It’s surprising to see this complex pastry at a milk-tea joint, but Chatime is owned by the same people behind French Baker, so it’s safe to say that baking (or in this case, deep-frying dough) is second nature to them. Available only at the Pioneer Center branch (which houses their quality and testing center), their Kronuts release was perfectly timed: on the heels of the current Cronut hype created by Ansel and made locally possible by Wildflour, they provide curious but cautious diners an alternative that won’t be financially painful should the experience end up in distaste-neither won’t, by the way.

Wildflour’s propriety has already prompted them to capitalize on the momentum and they’ve recently released a new flavor, which we can only surmise to be hazelnut. But while other restaurants are trying to keep up with this fresh pastry revolution, Krispy Kreme is trying to hang on to the waning speculoos craze, by coming out with a line of Cookie-Butter-tinged donuts, a sweet-on-sweet pastry that, in classic Krispy Kreme indulgence, doesn’t skimp on the decadence.

Chatime’s Kronuts are P55 each, available only at Chatime Pioneer, and may be ordered in advance by calling 584-7221.

Kronut Cronut Dominiqueansel Chatime Wildflour Croissantdonut Speculoos Cookiebutter Traderjoe’s Krispy Kreme
Your Guide to Thriving in This Strange New World
Staying
In? What to watch, what to eat, and where to shop from home
OR
Heading
Out? What you need to know to stay safe when heading out