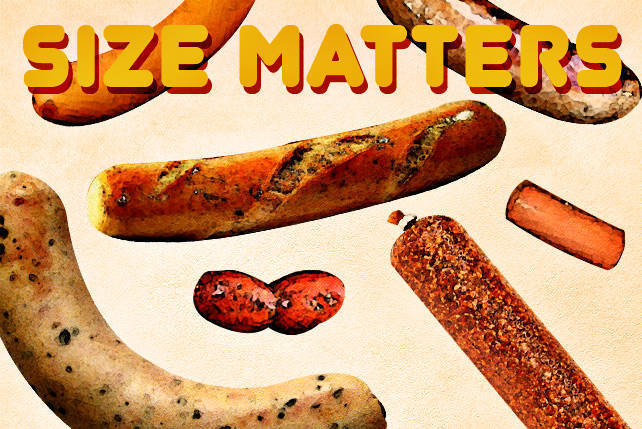 The long and short of it

(SPOT.ph) In the bubbling melting pot that is Manila’s restaurant culture, it seems like European cuisine is the latest to break ground. Sure we know requisite Italian, French, the occasional English, but not much beyond that. (Raise your hand if you know what haggis is-raise two hands if you like it). If there’s anything that embraces European culture, it’s sausage, a contribution to humanity so important that other countries have tried to adapt it to their own cuisine.

Since its origins in Greece long before calendars were invented, sausages have undergone numerous cultural transformations-fat, narrow, juicy, dry, tidbit, massive; cured, smoked, fresh-and while there are differences between one banger and the other, looking at rows of firm, elongated stuffed meat dangling over racks can be disconcerting. The long and short of it is, we’re teaching you how to tell one sausage from another in the simplest way possible.

First, a short definition, just so we’re clear: commercial sausages were developed by butchers to help preserve meat. Tissues, organs, and leftover meat would be "upcycled," ground, seasoned, and stuffed into natural (cleaned animal intestines or stomachs) or synthetic casings. Some fillings would be smoother in texture while others would have something much chunkier. Traditionally, sausages used pork, but modern interpretations have utilized other types of meat like beef, chicken, fish, veal, or a combination. Bangers can be grilled, poached, fried, baked, and more.

Note: Hotdogs and caseless sausages were not considered for this survey. Some types of sausage may have subvariants as in the case of chorizo, kielbasa, bratwurst, and salami.

PLACES TO GET YOUR SAUSAGE FIX IN MANILA:

This neighborhood deli is famous for two things: a terrific sausage platter and their Blackout Chocolate Cake. On their roster are kielbasa, nurnberger, bratwurst, krainer, chicken sausage, bockwurst, and Frankfurter. You can buy the sausages frozen or order them cooked, with mustard and sauerkraut.

In just a few months, Brotzeit has earned a reputation for serving up awesome brews and authentic bangers. They redefine the norm of serving only sausages to represent German cuisine: Brotzeit also has pretzels, spaetzle, and schnitzels, among other things. The sausages are cooked and served on platters carrying currywurst, kasekrainer, knoblauchwurst, bockwurst, weisswurst, nurnberger, and huhnerwurst.

They’re more known for a mean cheese and wine selection, but Santi’s has a good share of basic sausage du jour. This famous deli covers a good range of frankfurters and wursts.

This European gastropub quietly opened a few months ago. With a menu that’s strictly German, they know their sausage, offering more than 10 varieties, some of which go beyond the Eastern Bloc. They have bratwurst in veal, pork, and beef; chicken chipolatas, schubligs, Frankfurters, Hungarian, Italian, and more.

Sausage Bratwurst Chorizo Hotdogs Manila
Your Guide to Thriving in This Strange New World
Staying
In? What to watch, what to eat, and where to shop from home
OR
Heading
Out? What you need to know to stay safe when heading out