What’s next on our must-try list after Wildflour kills their Croissant Doughnut?

They’re replacing it with a new mutant donut.

On Monday, January 13, Wildflour Café and Bakery, the boulangerie that brought to the Philippines a version of the Dominique Ansel-trademarked creation that took over New York City, announced that it has decided to end their production of the flaky pastries. In a status message on their Facebook page, Wildflour published a lengthy eulogy saying, "Like the show F.R.I.E.N.D.S, we’d like to quit while we’re ahead and announce that by the end of this month, January 2014, we are discontinuing production of our cronut.*" 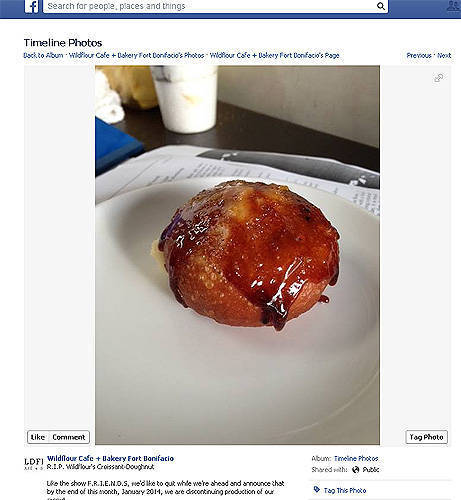 They also described that the baking process was "often back-breaking," and attributed the Croissant Doughnut's dismissal to other pastries that have "formed a union and complained about the diva-dom of their colleague." Things remain enigmatic, however, and Wildflour remains open about its possible return.

But this popular bakery isn’t losing too much sleep over the loss of (one of its) bestseller(s). At the end of the message, they've announced a new mutant bake to sink your teeth into: the crème brulee bomboloni, custard-filled donuts glazed with torched caramel. Wildflour, as many readers might remember, is also the first establishment to copy the Canadian Cronut copy, the Crookie. But for Cronut fans, other restaurants are still stocking up their counters with the flaky washer-shaped pastries. Click here for our updated Cronut directory.

Meanwhile, Connecticut has already moved on from the magic of the Cronut. Currently making headlines is the Crogel, a croissant-bagel hybrid that's kettle-boiled and hearth-baked, found in dairy chain Stew Leonard's. These two new developments are once again trailblazing a new path for donuts and other types of breads with holes in the middle. For other hybrids available in the Philippines, click here.

*The word "Cronut" is trademarked by Dominique Ansel. Wildflour sells their version under the name "Croissant Doughnut."

Cronut Wildflour Croissant Doughnut Donut Crookie
Your Guide to Thriving in This Strange New World
Staying
In? What to watch, what to eat, and where to shop from home
OR
Heading
Out? What you need to know to stay safe when heading out