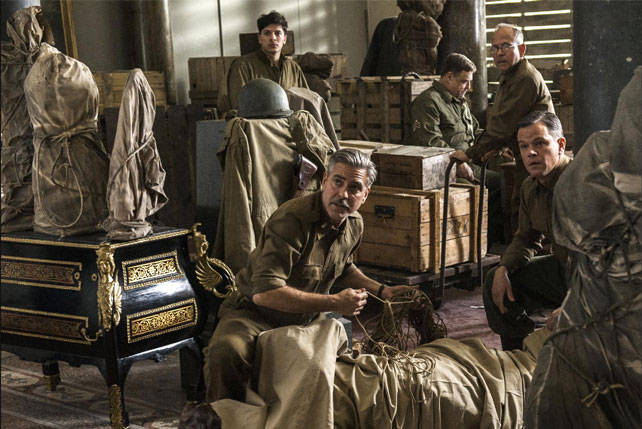 If you still haven’t seen this Oscar-nominated film, SPOT.ph blogger Paul Daza lists some reasons that might convince you to give it a try.

STORY: As World War II nears its end, art historian Frank Stokes (George Clooney) is tasked to lead a group of middle-aged art buffs, curators and historians into Germany. Their mission? To find and save thousands of pieces of art masterpieces created by the likes of Da Vinci and Michelangelo that were stolen by the Nazis. The mission becomes doubly urgent when word reaches Stokes that the Nazis would rather destroy the art works than see them returned to the Allies.

The heretofore unknown story. Like Schindler's List, this is another dramatization of a true WWII story that's as fascinating as it is obscure. If that Steven Spielberg opus was about Hitler's plan to rid the world of European Jews, then The Monuments Men is about Hitler's desire to destroy Europe's masterworks before they can be returned to their proper owners. The movie tells us that the art Hitler stole were to be placed in a Reich Museum that was envisioned to be even grander than the Louvre. When Germany's defeat was inevitable, Hitler gave the order to destroy the treasures, preferring that they be destroyed rather than preserved. When it shows how the Nazis plan to get away with it and how the Americans try to stop them, the script by George Clooney and Grant Heslov (which was based on the book by Robert M. Edsel with Bret Witter) is very smart indeed. 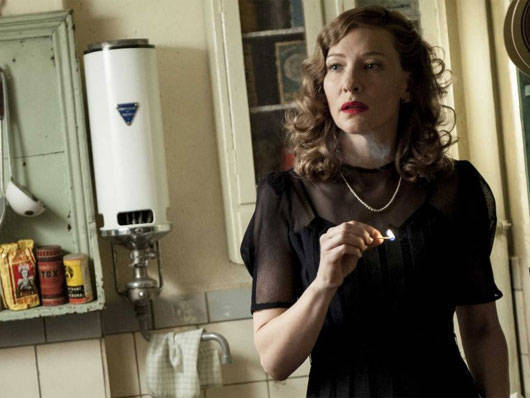 The A-list cast. With a roster that includes Academy darlings like Cate Blanchett, George Clooney, Matt Damon, Jean Dujardin and Bill Murray, The Monuments Men looks and feels a bit like a very special History Channel presentation, with actors who are much more attractive and expensive than the talented but anonymous thespians they normally employ.  Some Hollywood A-listers, however, are more equal than others, and my favorite performer in the film is Cate Blanchett by a long shot. As the museum curator in Paris who knows far more about what the Nazis did with the art than she's telling the Americans, Blanchett is the only member of the ensemble who effortlessly rises above the spotty, uneven script.

The art lessons. Saving Private Ryan posed a very interesting question: is it worth risking the lives of eight soldiers to save one man? The Monuments Men poses a similar conundrum: is it worth risking the lives of a few middle-aged art aficionados turned soldiers to save a few hundred paintings and sculptures? Thanks to the screenplay's eloquent description of a delicate statue by Michelangelo, the answer is most certainly yes.

The comedy schtick. Despite being able to assemble an A-list ensemble for The Monuments Men, it's clear from the finished film that writer/ director/ producer/ actor George Clooney didn't feel confident enough about the appeal of the true story that inspired the film, so much so that he felt he had to "commercialize" the tale and make it more accessible to more than just an art house audience. That's probably why there's a hint of a romance (between the characters played by Matt Damon and Cate Blanchett) and sitcom banter between the old-timers played by Bob Balaban and Bill Murray. Watching the film, you get the feeling that Clooney the director was trying to make his Monuments ensemble work like Ocean's Eleven. Sadly, directing an ensemble a la Steven Soderbergh doesn't appear to be Clooney's strong suit, his forced male bonding sequences undermining the movie rather than uplifting it. One running gag has Bob Balaban repeatedly protesting the nickname that Bill Murray gives him. The joke might have worked if the story was set in 21st century Las Vegas, but this is World War II we're talking about. Those two old fogeys who know nothing about soldiering are in the middle of a life-threatening mission and surrounded by Nazis, and they have time to bicker about nicknames? 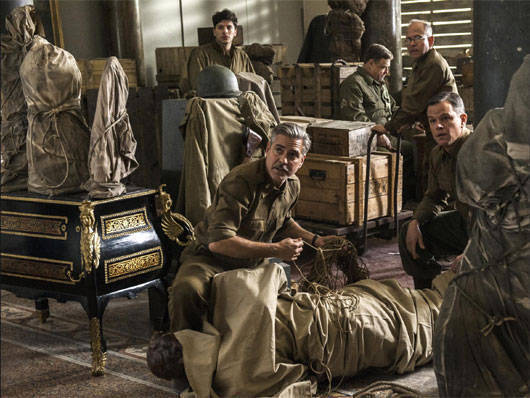 The Yankee Doodle Music. Adding to the film's inappropriately comedic tone is the frequent use of playful, flute-and-drum Yankee Doodle music in the scenes of John Goodman, Bob Balaban, and Bill Murray. It's another indication that Clooney the writer/director/producer didn't know if he was making a suspense thriller or a fish-out-of water geriatric comedy.

The underutilized Jean Dujardin. I became an admirer of Jean Dujardin when I saw The Artist, the film that made him a best actor Oscar winner a couple of years ago. Because The Artist was never released locally in theaters, I saw it on dvd. One reason why I was so looking forward to The Monuments Men is that it would give me a chance to see Dujardin on the big screen. Having seen the film, all I'll say is that I felt cheated by how underutilized he was in Monuments.

IN BRIEF: Considering its fascinating subject and A-list cast, this should have been a masterwork, but it's not. The Monuments Men could have been great, but George Clooney's uneven scripting and inconsistent direction make it a stretch to even call it "good."