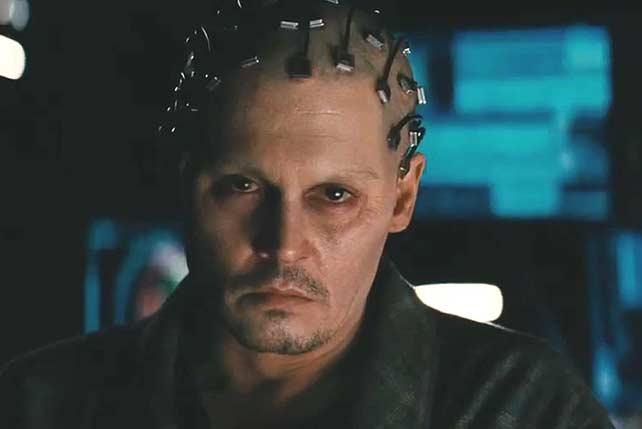 SPOT.ph blogger Paul Daza on this big-budget film: Was it worth the bill?

STORY: Dr. Will Caster (Johnny Depp) is at the forefront of making artificial intelligence (A.I.) a reality. Currently, he's working on the creation of a sentient, self-aware machine whose intellect would surpass that of the combined brain power of every human being since the dawn of Man. Fearing the worst for humanity, a group of anti-technology extremists led by Bree (Kate Mara) target Will for assassination, triggering a series of events that unwittingly hasten the actualization of Will's AI project instead of terminating it, with frightening consequences to Mankind.

The characters encircle a debilitated Dr. Will Caster.

The casting. The talking heads who populate this sci-fi thriller include Depp, Rebecca Hall as Will's wife Evelyn, and Oscar winner Morgan Freeman as a fellow AI expert. Oh, and Paul Bettany finally gets to show his mug again after years of being in the moviescape solely as the voice of Jarvis in the Iron Man movies!

The impressive production values. Transcendence is a $100 million Hollywood production from Christopher Nolan, architect of the revered Dark Knight Trilogy and last year's Man of Steel.  Making his directorial debut here is Nolan's long-time cinematographer Wally Pfister, who won an Oscar in 2011 for his brilliant work in Nolan's brainy blockbuster Inception. With this much talent in front of and behind the cameras, of course, Transcendence looks and sounds good.

Sadly, these are the only compliments one can bestow on the film... 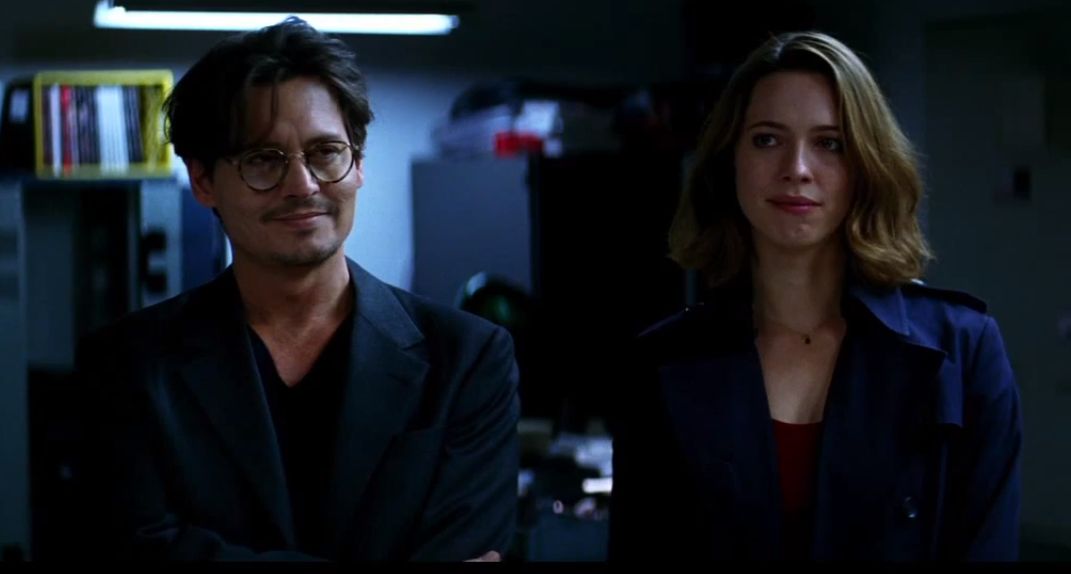 Nothing is awesome. If everything was awesome in The Lego Movie, the reverse is true here. Considering how much talent went into the creation of Transcendence, it's almost criminal how forgettable the movie is. If, like me, you were expecting Transcendence to be this year's Inception, you'll be very disappointed indeed.

The script, for starters, doesn't have an ounce of Inception's dazzling and tickling flights of intellectual fancy, which made dream hacking the next coolest thing in sci-fi after dinosaur cloning (Jurassic Park). Though the script for Transcendence throws terms like "sentient being" and "nanotechnology" around constantly, scriptwriter Jack Paglen doesn't bother to create situations in the story that would make such things exciting for us ordinary viewers to learn more about.

Similarly inept is the handling of the flash forward that signals the film's progression from act one to act two, in which Will Caster's consciousness has his wife help him build the high-tech, multi-million dollar facility that will house his rapidly expanding online brain. Just before the movie leaps the two years that the flash forward covers, the bad guys decide that they must stop Will from achieving his objectives at all costs. And yet, when we see the antagonists again after the two years have passed, they appear to be nowhere closer to stopping Caster. In the meantime, Caster has transformed a once-dead rural town into a vast, sprawling, computerplex that doesn't appear to be fortified in any way. So why did the bad guys just twiddle their thumbs for two years as Caster became more and more powerful even though they swore to stop him? Don't expect the film to tell you.

Your likely facial expression throughout the film.

Another problem the script has is its inability to make the characters interesting. I mentioned at the start of this review that the A-list cast was one of the film's pluses. What I didn't mention is that the movie squanders the talents of stars like Johnny Depp, Morgan Freeman, and Rebecca Hall by depriving them of any challenging or engaging scenes to perform. The story and back story of Will Caster and his wife, for instance, has nothing on the intriguing and electrifying relationship that bound Leonardo DiCaprio to Marion Cotillard in Inception. The only detail about Depp's character that I remember from Transcendence is that he had an old-fashioned record player in his home. (So did Tom Cruise in Oblivion). So what does this detail tell us about Will Caster? That he's a retro guy who prefers analog to digital, probably. But what does this have to do with his being the most gifted researcher in AI research?

Also lacking in awesomeness is the cinematography. Because Transcendence was directed by the cinematographer of Inception, The Dark Knight, Memento, and many other unforgettable  opuses, I expected the camerawork of Transcendence to be textured and well, transcendent, at the very least. No such luck. There aren't any shots here that you'll take with you after its 119 minutes are over.

All these would have been forgivable if the movie had an unexpected, WTF ending that wrapped everything up in a provocative bow a la Inception. Alas, the only word I can use to describe the movie's conclusion is SILLY.

IN BRIEF: Transcendence is a thought-provoking, intellectually challenging sci-fi adventure about the perils and promise of an artificial intelligence taking over the world...NOT.

Transcendence Johnnydepp Katamara Morganfreeman Rebeccahall Christophernolan
Your Guide to Thriving in This Strange New World
Staying
In? What to watch, what to eat, and where to shop from home
OR
Heading
Out? What you need to know to stay safe when heading out