SPOT.ph Exclusive: Triple O's by White Spot soon to open in Manila
Loading
Already a member? Log in
No account yet? Create Account
Spot.ph is your one-stop urban lifestyle guide to the best of Manila.

The secret is out! It’s this Canadian burger chain.

(SPOT.ph) Hype was definitely built around this burger joint. For some time, excitement was generated when a website (www.secretburger.com.ph) asked visitors to guess the name of a legendary burger chain arriving in the Philippines. The three O’s and Canadian maple leaf hinted that a Canadian franchise might open in the city.

SPOT.ph has confirmed that Triple O’s by White Spot will start operations on June 20 on the third floor of SM Megamall’s Mega Atrium.

Triple O’s was founded by Nat Baily who, in 1928, also originated White Spot, Canada’s first drive-in restaurant in Vancouver. White Spot became famous for a burger with a "Triple O" sauce, which became a brand on its own, with branches as far as Hong Kong, China, Singapore, and now, the Philippines. 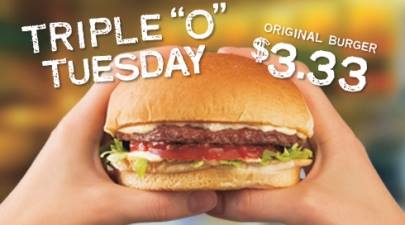 Characteristic Canadian cuisine has always been a mystery, but Triple O’s signature 100% Canadian beef patties all grilled to perfection, we expect, will be easy for our taste buds to fathom. The Manila menu has yet to be revealed, but there’s a big chance that the chicken and fish burgers will also be included, as well as their French Fries, Caesar Salad, and Premium Milkshakes. Our fingers are crossed for the poutine, as well.

Watch for SPOT.ph’s exclusive post on their menu soon!

Triple Os Manila Whitespot Smmegamall
Your Guide to Thriving in This Strange New World
Staying
In? What to watch, what to eat, and where to shop from home
OR
Heading
Out? What you need to know to stay safe when heading out