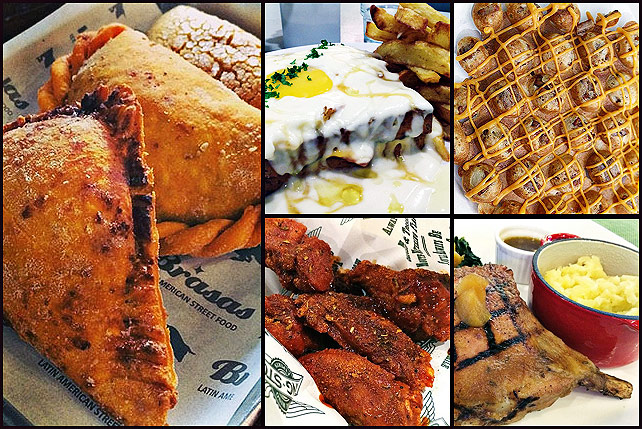 The 10 Best Things We Ate in June

Noteworthy dishes in this food-filled month 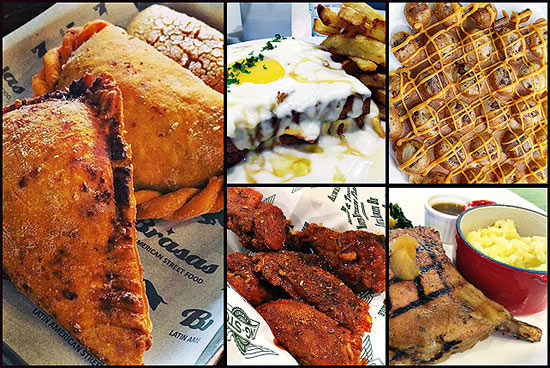 (SPOT.ph) If you don’t already know, here at SPOT.ph, we love food. You need it to live, but we find that there are some dishes that go well past the virtue of necessity. While others content themselves with a deep fryer and the usual salt and pepper, there are some who make-or at least try to make-an art out of it, with delicious displays and even yummier flavors. We believe those that go above and beyond their duty deserve necessary recognition. Our top picks among the dishes we ate throughout June: 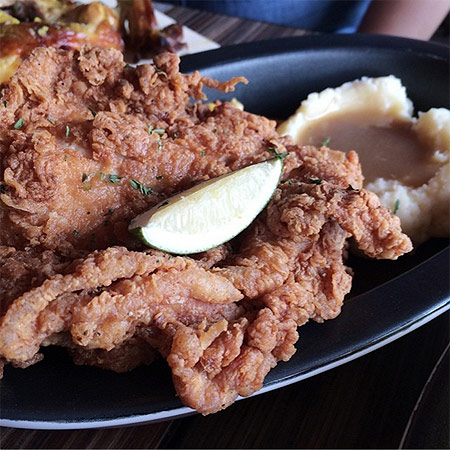 The butterflied Todo is the obvious choice, but we're heading toward the more controversial route by saying that this twice-cooked fried thrill is tops. Two slabs of boneless thighs are brined, battered, and fried golden. There's sneaky layer of spice under an initial saltiness that's elaborated further by any of Peri-Peri's special 12 sauces (go crazy!). The blonde coat sings a crisp melody with every bite. It's sided with corn and carrots and mashed potatoes, but those are just bonuses. For P395, it's something you'll want to come back to over and over again. 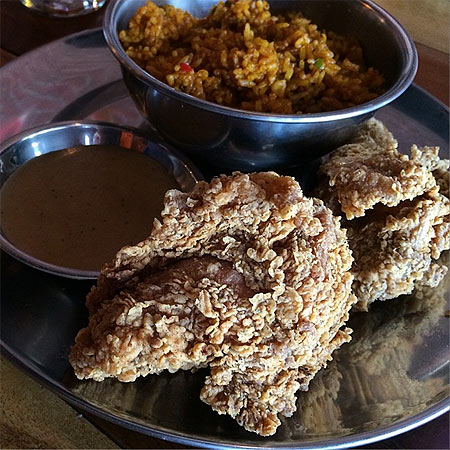 What exactly makes this chicken Latin we don't know because it speaks to us in a language we understand perfectly. The price ranges from P99 to P290 and that alone already has us hooked. Then, the actual chicken: that amazingly flaky crust, those deep to-the-bone flavors from the overnight marinade, the gravy that you'll easily neglect. This is the dish that will have your heart racing but slowing down at the same time with excitement.

People have been stepping up their fried chicken game, because it's the one of two this month that has us absolutely smitten. 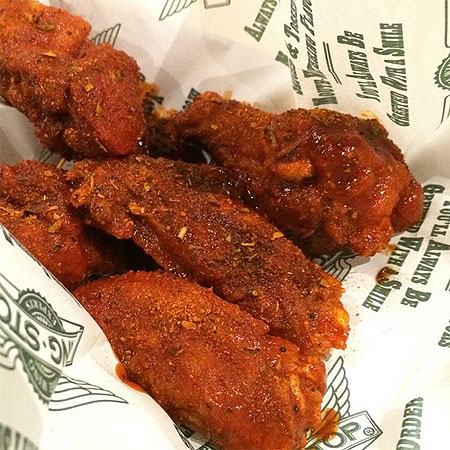 These Buffalo wings are wild and wickedly hot. It's dressed in sexy red coat-the type you don't want to take off-and made up with a powder of spices. It starts off tender, but builds up to a passionate heat. It's how all love affairs are supposed to be. 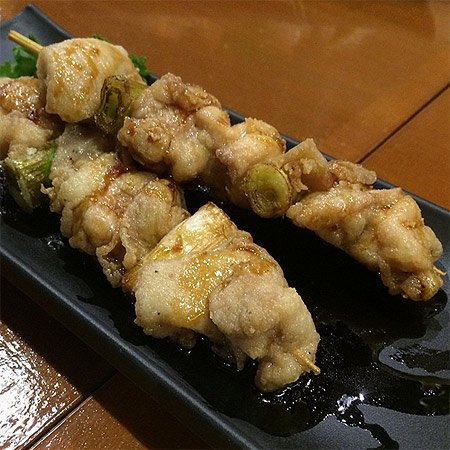 It's difficult to choose a favorite from this casual Japanese joint. There's the cheaper-than-usual ramen, the crazy makis, even the sake, but we're going with the meal of mystery. This skewer has a secret. Instead of the traditional grilling, Chef Takashi Kawasaki deep-fried his sticks of chicken resulting to a juicy meat and crisp skin in between. 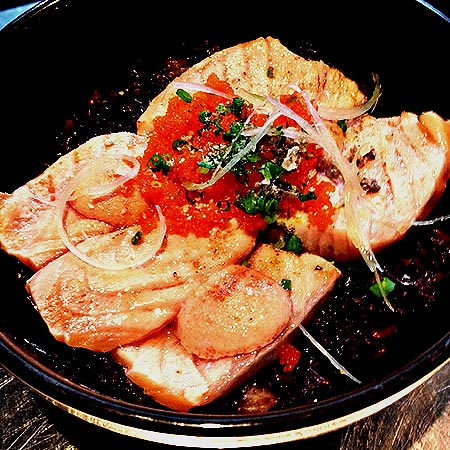 Salmon Donburi from Your Local

Your Local is one those places that you want to keep a secret. Not that it’s hard. This Makati hideaway is easy to miss, but the P390 Salmon Donburi is worth the journey. Pieces of Norwegian salmon are lightly torched to give it a bit of smokiness. A dollop of mentaiko, Japanese mayo, and ebiko all combine to pump up flavor while the base of delicious mushroom rice brings together those diverse flavors. It’s a harmony of contrasts that work for one explosive finish. 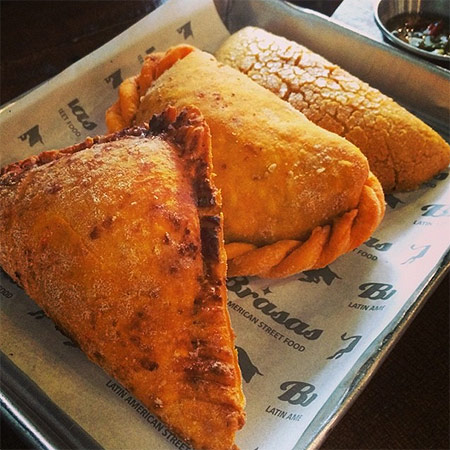 This tray is your quick and delicious passport to South America. There’s the flaky Colombian filled with potatoes and beef brisket, the denser Argentinian with a saucy lengua interior, and the triangular Chilean with traces of smoky chorizo and paprika. The sampler is offered for a mere P190 or you can go big with the six-piece (two of each flavor) for P360. 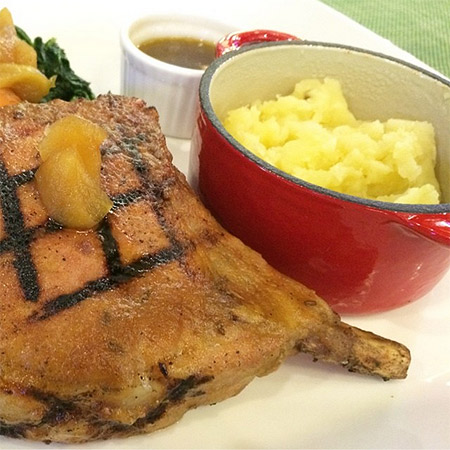 This cut is larger than life itself. It’s more than an inch thick, and when you have a showpiece like this, you’re supposed to show it in its natural P488-glory. Roots doesn’t do much by way of ornamentation, allowing the pork to shine on its own. Chef Chris Oronce cooks it in sous vide briefly to keep in tender, before glazing it with an apple-infused sauce, and laying it lightly over the grill. The sweetness of the pork marries gorgeously against the boldly bitter mustard greens. The side of rustic mashed potatoes? It deserves its own spotlight. 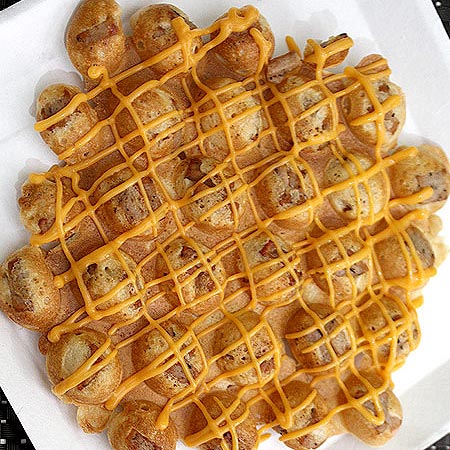 A Hong Kong shopping companion is transformed to a delectable sit-down delight. Egg-it fills these bubbly waffles with delicious Black Pepper SPAM and a lacing of cheese. The buttery dough perfectly highlights the salty savor of the luncheon meat. It’s a simply delicious find at a hole-in-the-wall. 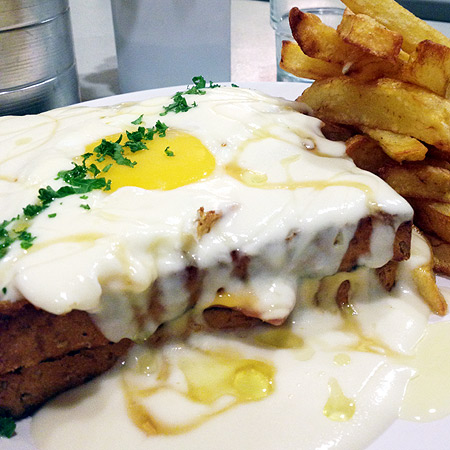 The Morning After by Bamba Bistro

Those of you who think they've found the best cheese sandwich in the city, hold the cheese! Before you make hasty decisions, know that this hidden gem in the South is a worthy contender. Bamba Bistro has completely reinvented the croque madame (P310). Their secret lies in the delicate honey truffle sauce that is poured over a fried egg atop a rich sandwich made with premium ham, mozzarella, and cheddar cheese. A sumptuous breakfast complete with a side of fries available any time of the day? Yes, please! Suddenly waking up early is so much more bearable. 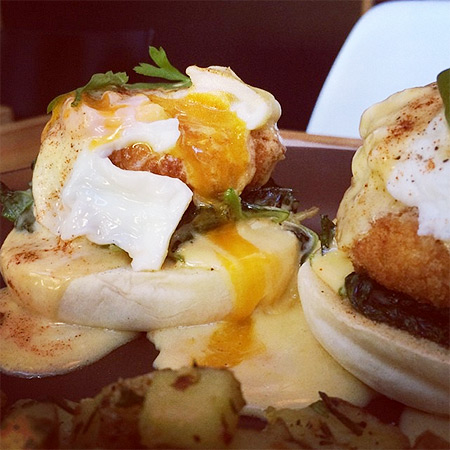 It's a pretty bold move to change tradition. And when that tradition means bacon, you're either brilliant or nuts. Main Street is a little of both. Their prized crab cakes replace the bacon component, adding a briny, buttery texture with extra crunch from its golden batter. Like most great innovations, this surprise shift raises eyebrows but satisfies in the end. Crab cake in Eggs Benedict is a risk that definitely pays off.

Restaurants Manila Bestfood Must-try Best Things Best Food Restaurants Manila Musttry Bestthings Top
Your Guide to Thriving in This Strange New World
Staying
In? What to watch, what to eat, and where to shop from home
OR
Heading
Out? What you need to know to stay safe when heading out