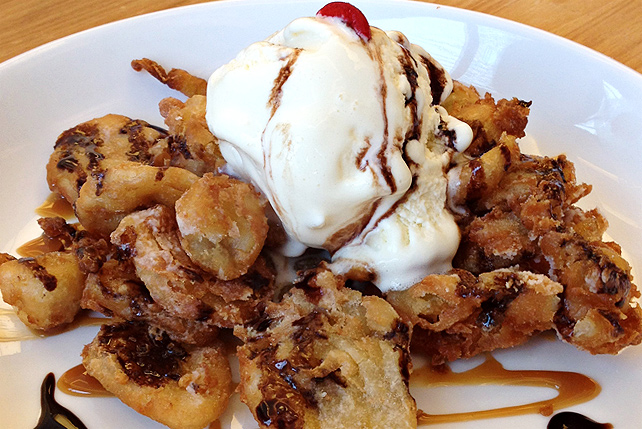 (SPOT.ph) Our grandmothers are probably rolling their eyes right now. A champorado brownie? Really? What was the problem with the warm spoonable version? S’mores have been turned into macarons, creme brulees have been either shrunk to tarts or enlarged into cakes. Evolution is only natural, even with food.

To celebrate Filipino culture this August, we’ve rounded up native delicacies that have crossed over to modernity: hybrids, reinventions that will break you out of your dessert routine. Here are fresh takes on your traditional Pinoy kakanin and panghimagas. Nothing will beat the originals, but these 10 come quite close. 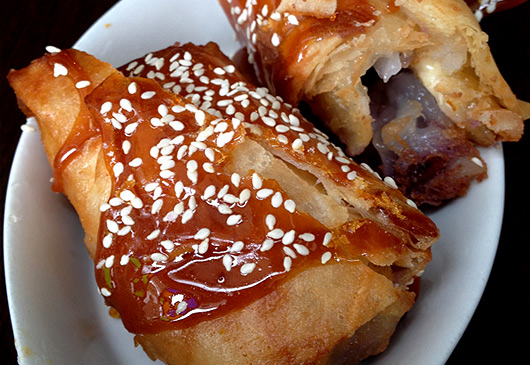 The hardened caramel coat is hugging the giant fried roll a bit too tightly that it’s almost hard to bite through it. But persevere and you’ll be rewarded by a generous filling of ube halaya, macapuno strip, and monggo beans nearly overpowering the bananas. On top, a sprinkle of white sesame seeds. It's definitely not the turon of our childhood but it manages to provide the same level of satisfaction and comfort. Enjoy it with a scoop of ice cream for an additional P50. 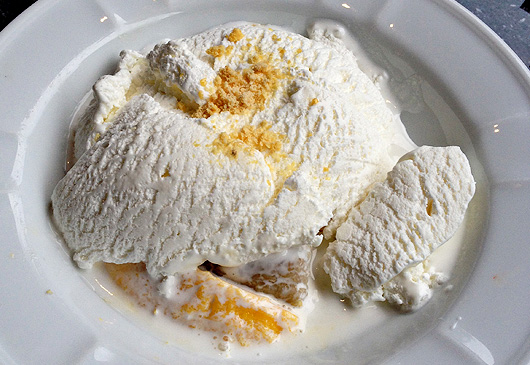 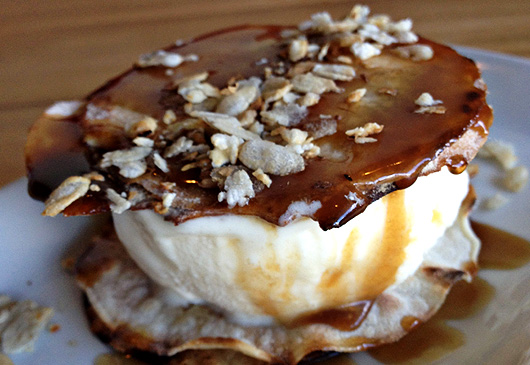 This is one of those ideas that seems so simple, you wish you’d thought of it yourself. But you didn’t. Chef JP Anglo did. It’s essentially an ice cream sandwich, but keep it on the plate to avoid making a mess with your hands. A scoop of ice cream squeezes itself in between two homemade discs of crisp unleavened bread, all of which is heavily doused with muscovado sugar syrup and dredged with pinipig. It’s at a standard thickness, but it delivers on so many levels. 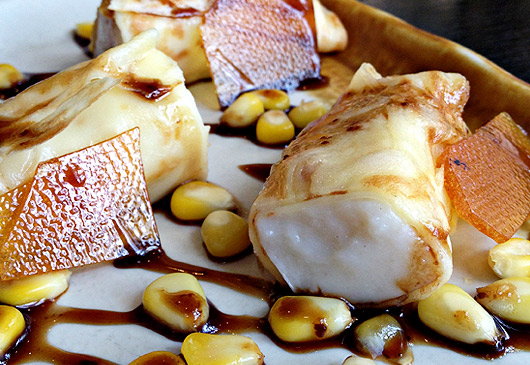 It's an upscale version of the popular corn and coconut milk pudding. Instead of serving it as is, Sentro has shaped their maja blanca into logs and clothed in thin crepes. Muscovado syrup wraps around the ensemble speckled with corn kernels and sugar shards (which are a tad unnecessary). Make sure to have a little bit of everything in every bite to truly remind you of that delicious kakanin. 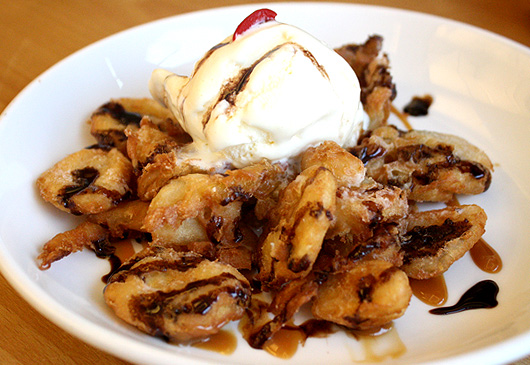 It's a hot and cold dessert that will have you popping one piece after another. It's oddly addictive and reminiscent of turon: pieces of banana and jackfruit have been battered and deep-fried to a wonderful crisp. It is crowned with a scoop of vanilla ice cream and lightly drenched in chocolate and dulce de leche sauce. No matter how full you are, this is a dessert that would have you digging. 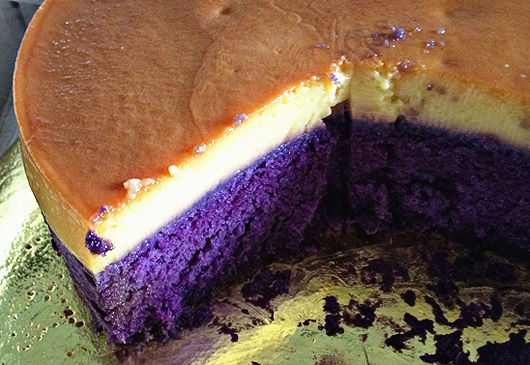 The humble leche flan is upgraded as a two-layer dessert. The caramel custard firmly plants itself on top of an ube sponge cake. Both are light in flavor and body, which makes it easier and faster to finish. The two components would make for delectable desserts individually but they work best as pair-like a match made in dessert heaven. Plus, the price is a small amount to pay for indulgence. 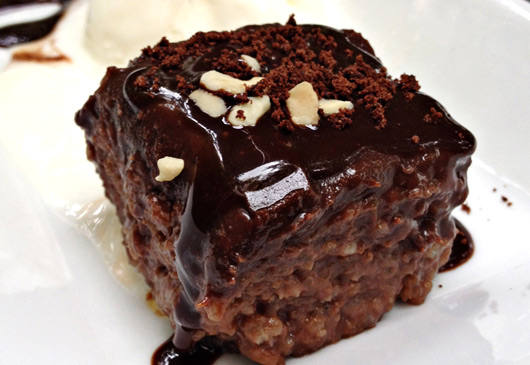 This champorado doesn't come warm and in a bowl. Instead, it arrives on the table solid and almost as cold as the accompanying mantecado ice cream. XO 46 has transformed our all-time favorite chocolate porridge into something of a brownie, with the champorado as base, topped with thick fudge, and finished off with a dusting of cocoa powder. With all that chocolate found in a small block of dessert, one would think it would be cloyingly sweet. But it's not. It hits the sweet spot just right. 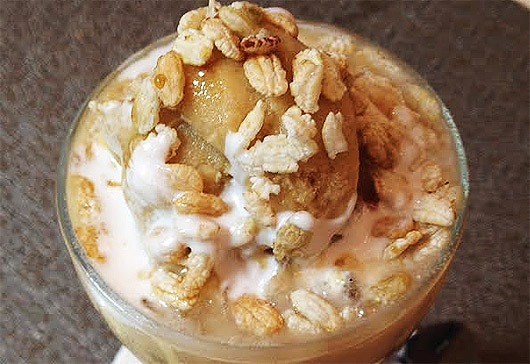 This shaved ice dessert is one of our all-time favorite refreshers (yes, no matter the weather). Sago, pinipig, and gulaman are sweetened a dual force of coconut cream and a sweet syrup made of coconut sugar. The finishing touch is a few scoops of ice! The ginumis is a more modest version of the halo-halo, but Pamana’s makes it outstanding with the homemade panucha ice cream. The result is much more sinful dessert. 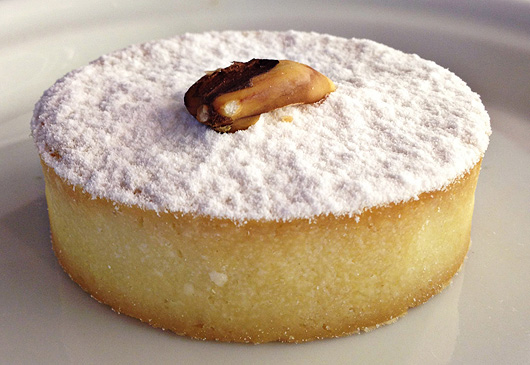 CINQ is notorious for too-pretty-to-eat gustatory elegance, and this one is no different. Dulce is another undeniable beauty: a tart bronzed shell is filled with a mixture of pastillas de leche and chopped pili nuts, then dusted with a veil of powdered sugar. For an additional P20, you can enjoy it with langka or guyabano jam, which you might as well gor for because a little extra goes a long way. 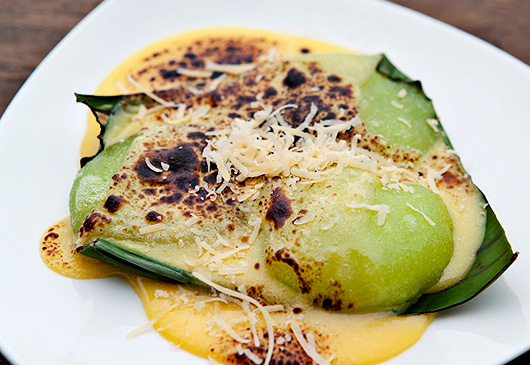 It’s been featured and raved about multiple times, with good reason. It's just that darn good. Soft and supple pandan-flavored cassava dumplings are covered with a slightly loose custard sauce that's been torched and crowned with grated quezo de bola. The blanket of luscious, silky sauce makes the dessert transcend way above the usual. Don't feel the need to refrain from scraping the remnants off the plate or even ordering another. Many customers before you have already done just that.

Kakanin Best Filipinodesserts
Your Guide to Thriving in This Strange New World
Staying
In? What to watch, what to eat, and where to shop from home
OR
Heading
Out? What you need to know to stay safe when heading out